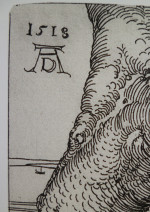 Albrecht Dürer’s graphic oeuvre includes some 100 copperplates, 360 woodcuts, 3 drypoints and 6 iron etchings. The last of the latter is The Large Cannon, which is famous not only for Dürer’s use of the new technique of etching but for being an early example of a wide panoramic landscape depicted in a print. It is unlikely that Dürer etched the scene from nature, as Rembrandt presumably did at a later date; the print is probably based a drawing he made around 1517 of the Upper Franconian town of Kirchehrenbach near Forchheim showing the Ehrenbürg mountain ridge.

Though suits of armor and harnesses had been decorated with etchings as early as the mid-15th century, etching on paper was still an experimental medium at the time Dürer was working. The first person to print etched iron plates on paper appears to have been the Augsburg artist Daniel Hopfer around 1500.  (Hopfer’s son Hieronymus created the only known non-reversed copy of the Large Cannon, probably after Dürer’s death.) Dürer’s etchings are all executed on iron plates because no acid suitable for etching copper had yet been identified.