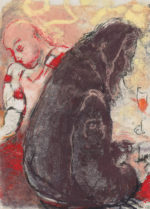 We are pleased to present Kate McCrickard’s Drinkers as the seventh of these projects.

When does an observation transmute into a fiction? We know from neuroscience that memory and psychological need restructure experience in the process of recording it. In the mind, individuals are cross-referenced with categories, details are dropped or rewritten, the person blends into the type. Contemporary anxiety about this slippage may explain why so many figurative artists who resonate with us today—Vermeer, Degas, Manet—are those who called attention to this inevitable ellipse in the transmission of truth. This is real, their pictures tell us, and it’s also an invention. 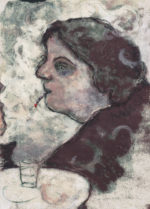 The subjects of Kate McCrickard’s Drinkers monotypes are flesh-and-blood people—early-in-the-day patrons of the shabby zinc bars in the Belleville neighborhood of Paris, where the artist lives. Some are gamblers (the bars are outlets for state-controlled horse-betting); some are drunks; most are unemployed, though at least one is a local butcher. The Drinkers, however, are not portraits: weaving line stiches together crumbling swathes of color to form characters we recognize: the unkempt smoker, skin as ashen as his clothes; the quiet woman, eyes downcast, hand-to-mouth; the sad and gentle toper. We know them from our own neighborhood dives and also from museum walls where they sit, still hunched over their Golden Age jenevers or Belle Époque absinthes. The butcher—a man with a name and personal history—becomes the buveur. 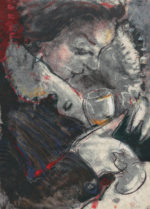 For those who know McCrickard’s work, this seediness may seem a departure. For several years her work has concentrated on the subject nearest at hand, her own small children. (It was, in fact, parental necessity that returned her to figuration after some years of courting abstraction. The phrase “keeping an eye on them” has a wealth of implications for those who draw.) In paintings and prints, her loosely attentive marks wrapped around the interpersonal dramas of childhood like a lariat. These are remarkably dispassionate pictures, full of the wiggly energy and uncompromising seriousness of little kids [see Art in Print, May–June 2013]. Even so, given the evolutionary directive to find babies charming, pictures of children can be difficult to see for what they are as art.

Moving from the nursery to the daytime darkness of the zinc, the Drinkers clarify what McCrickard has been doing all along: looking and remaking the experience of looking. Like the children, these barflies were near at hand, vulnerable and largely unaware of being observed. (Initially she worked with her sketchbook under the table; now, she says, the bars’ habitués have come to accept her as a fixture—“part of the wallpaper.”1 ) Unlike the children, these figures sit in isolation, their gazes directed downward into the glass or upward at an angle that suggests an out-of-view television screen. 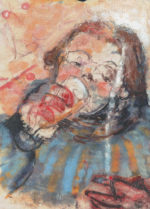 Drawing inevitably departs from its subject: most visual information is left out and, like a text trimmed so that only one word in a hundred remains, it tells a different story than the one that flashed by in real time. Many artists cling to the notion that this distillation serves to reveal the Platonic essence of its subject. McCrickard is under no such misapprehension. She’s aware of what’s before her, and also of how it is colored in her sight by earlier drinkers caught by earlier artists in earlier bars. There is, she acknowledges, “always a prompt—something recognized.” 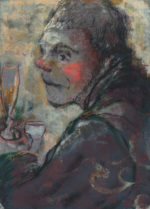 Her sketchbook drawings are made quickly (the subjects are in motion), but in the studio, time slows down and images develop incrementally, sometimes over the course of many months, and in the most elliptical of ways. Improvising variations on Gauguin’s trace monotype method, she works on the back side of Japanese paper laid on an inked press bed. Pressure on the back causes ink to stick on the front. Where a ballpoint pen presses on one side, a narrow irregular line of ink will appear on the other; drawing with fingernails produces a broader, fuzzier adhesion of ink; rubbing with her whole hand creates soft blocks or tone. But she cannot see the outcome as she is working. The oil-based colors squish, pull and puddle in quixotic ways. This lack of direct control—and the attendant unpredictability—are the allure: “It is important that it’s all blind—by touch, really.” As one would expect, there is a lot of failure, and resolutions are often circuitous and unexpected. The method doesn’t allow for easy subtraction, only addition, and some sheets go through dozens of states, spending months on the studio wall. The one she dubbed “gin blossom” began as an offprinted “ghost” of another print and accumulated 16 colors before achieving its final, arresting state, in which the drinker’s rosacea breaks through the dinginess like dawn breaking over gray water.

McCrickard has said she is “looking for forms with event, structure rather than narrative.”2 The narrative is un-avoidable of course—we read it into the gestures, the expressions, the number of empties lined up on the table—but the artist doesn’t investigate, doesn’t impose, doesn’t pity or condemn. One effect is undoubtedly to turn individuals into types. The other is to make us really look at people. McCrickard knows her pictures are inventions; we also know they are real.

Become a subscriber or purchase the issue individually to get your copy of Drinkers.