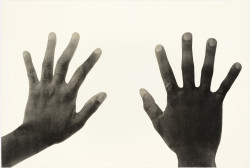 We are pleased to present Damon Davis’s All Hands On Deck as the second of these projects.

The cry became a chant in Ferguson, MO, after Michael Brown was shot to death by police on 9 August 2014. In the days and weeks after the unarmed teenager’s death, initially non-violent protest escalated into exchanges of tear gas, rubber bullets and Molotov cocktails. Images of burning cars and of police armed and armored like ground forces in Iraq flashed around the world.

Brown’s death came just three weeks after Eric Garner was choked to death by police on a Staten Island sidewalk. It was followed by the deaths of 12-year-old Tamir Rice, shot by police in Cleveland on 22 November; Walter Scott, shot in the back by a police officer in North Charleston on 4 April; and Freddie Gray, who died in a police van in Baltimore eight days later. They joined the long, sad roster of unarmed black Americans killed by those who swore to protect and defend. 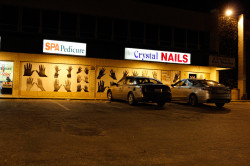 Damon Davis’s All Hands On Deck project was born on the streets of Ferguson. In the midst of the anger and the momentum for change, Davis began photographing the hands of people involved in the protest movement—black, white, male, female, young, old. In Ferguson, “hands up” was recast—a gesture of surrender became one of resistance and fortitude. Davis, a native of nearby East St. Louis, also understood that these same hands are necessary implements of survival and rebuilding. He and his colleagues had the photographs printed on three-foot-high sheets of paper and plastered them up on the boarded-up storefronts along West Florissant Avenue, the street that had become ground zero for the conflict. The point was not vandalism but community solidarity; the postering was done with the cooperation of storeowners. The street was transformed into something unexpected and visually compelling. News photographers took notice. A cliché of hopelessness—the smashed shop window—was upended.

Davis set up a website with free high-resolution images of the hands, http://www.allhandsondeckproject.org, which encourages visitors to “download and print the hands (or make your own) and post them in your city.” All Hands On Deck has spread from St. Louis to Boston and New York, Ghana and India. It has also spread from the ephemeral street to the archival gallery—Wildwood Press in St. Louis recently published a portfolio in which the hands take form in perfectly nuanced lithographs.

The Art in Print iteration of All Hands on Deck is smaller than either the street works or the lithographs, but the artist encourages owners to mix up a batch of wheat paste, find an appropriate, meaningful location and leave behind a modest moment of humanity for some unknown passerby to find a small reminder of a big idea. 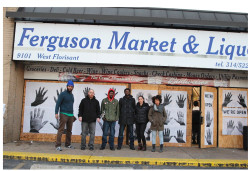 In his essay for the Wildwood portfolio, Daniel Strong cites President Obama’s eulogy for the nine people killed at Mother Emanuel AME Church in Charleston, South Carolina, ten months after Michael Brown: “the president once again, in the face of unspeakable terror, invoked the grace of black America in its centuries-long stand against evil. But he also warned against the tendency ‘to slip into a comfortable silence again … to go back to business as usual.’ While Davis’s images are now icons of one particular event in Ferguson, their intent, like the artist’s own, is to sound an ongoing call, first to self-reflection and then to communal action.”

“It is our right,” Davis says, “to be seen, to be heard, to be validated. It is our collective responsibility.”

Become a subscriber or purchase the issue individually
to get your copy of All Hands on Deck.