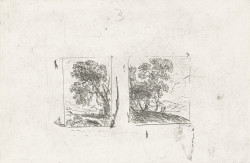 The use of landscape as subject and background in prints dates back to the late 15th century, but new approaches appeared in Rome in the early 17th century. Claude Lorrain concentrated on the depiction of landscape from early in his career, and Joachim Sandrart described how he would go out into the Roman countryside with fellow artists to draw directly from nature.1 Unlike his peers, however, Claude transformed these experiences into a novel kind of landscape subject. He took time to observe nature closely and then developed new images in his studio that derived from those experiences; these works, though invented, remained as faithful as possible to what he considered to be the true appearance of things.2 The Arcadian landscapes he developed through this process became an integral part of his oeuvre.

Claude’s practice of drawing and gathering inspiration from nature is evident in his Roman sketchbook from the early 1630s.3 In the prints he began making probably shortly after, he transformed the experiences gathered in the drawings through technical and formal innovation, in the process establishing influential new modes and paradigms. 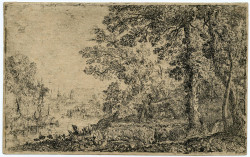 Of the 44 etchings Claude produced over the course of his career, none is an academic reproduction. Most of the early prints are markedly independent works, even those linked to drawings; they represent an alternate means of addressing the same basic questions: creating richly atmospheric images by rendering landscape’s intrinsic characteristics of space, light, and texture. Arthur M. Hind stressed the originality of Claude’s prints as far back as 1925,4 and yet within conventional academic hierarchies it remains underrated.5

The countryside of the prints (and to a lesser extent the drawings) is never empty: goats and sheep consort with rural figures who converse, dance, tend their cattle and occasionally commit a robbery. These calm, sunny, pastoral scenes offer a counterpoint to the violent storms, harbor scenes, and fireworks that occupied Claude in his drawings, paintings and other prints, and he used them to broaden his abilities and to explore fresh ways of working. 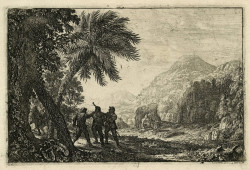 A striking example is provided by the comparison between a drawing from the Roman sketchbook and an early print. Most of the sketches were made with brush and ink, and feature large washed areas that could be easily translated into paintings, but not prints. A few pen-and-ink drawings, however, can help shed light on Claude’s understanding of etching and his treatment of Arcadian imagery. A drawing in the British Museum, Tree and distant View (1630), reveals an idea almost identical to that of the etching Les deux paysages (The Two Landscapes) (Fig. 1), usually considered part of Claude’s first set of etchings. The works share the same conception of the tree, the same manner of depicting foliage with abbreviated, slightly ascending hatching to deepen the shadows, and the same rather summary treatment of the background. Evidently, Claude developed this idea while out sketching and later attempted to translate it into etching. The numerous, somewhat awkward lines and strokes in the print probably indicate his lack of mastery with the etching needle and his difficulty adjusting to the smaller dimensions of the plate. Though Claude attempted effects similar to those in the drawings, early prints such as this do not quite succeed, and may well have been intended merely as technical experiments. 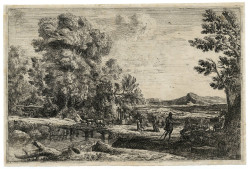 His skills as an etcher improved quickly, however, as can be seen in Le pâtre et la bergère (The herdsman and the shepherdess), enabling him to attain a complexity of background comparable to that of his drawings.6 L’Apparition (The apparition) (Fig. 2) is the first etching in which Claude varied the lines and where the gradual recession of the landscape into the background is convincingly rendered. Though the image is developed in detail and space is differentiated with great subtlety, it has no direct connection to any prior drawing or painting.

In pastoral and rural drawings and etchings, such as the various states of the Scène de brigands (Scene of brigands) (Fig. 3),7 Claude began to concentrate less on the foreground figures and more on depicting distant views in detail. He also started to employ the process of successive changes as an important part of his method—a road to innovation. Some plates from the later 1630s were reworked repeatedly, frequently in the sky and the trees, while the fundamental composition usually remained the same.

To soften some parts of the image he eliminated other parts, harmonized the overall tonal values and developed a new understanding of the background landscape—solutions applicable only to prints. For Claude, such technical issues were intertwined with iconographical ones: if the balance could be perfected, the particularities of the subject would shine forth. A long succession of states was often required to achieve this balance, especially for pastoral landscapes,8 which demanded a light, airy, joyful atmosphere, in contrast to the dark, dangerous shipwrecks and thunderstorms. By the mid-1630s, Claude had mastered these questions and concentrated increasingly on Arcadian subjects such as dancing peasants and herdsmen, some playing the flute as in Le Bouvier (The Cowherd).9 Even biblical subjects such as Rebecca et Eliezer (Fig. 4) could be transported to Arcadia. 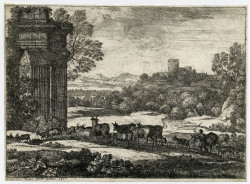 In the 1640s Claude made a number of prints that derived from prior paintings, but these also are not reproductive. The prints rework elements from the paintings at a different scale and with different types of marks and structures. They are designed to function differently, too: paintings were always commissioned, which meant both the client and the context were predetermined. Prints, however, were usually produced for the open market; the client and the artist did not know each other and the context in which the work would find itself could not be controlled. Small and easily transportable, prints might be inserted into a wide variety of settings. They served as visual arguments, clarifying iconographic questions or providing points of comparison. On the one hand, prints can show greater detail than paintings; on the other they can be less explicit. Finally, their reliance on line, black ink and white paper, in place of paintings’ full chromatic range and tonality, meant they had to be understood by the viewer in more abstract terms. For Arcadian subjects this could be an advantage: they could be paired as companion pieces to establish deeper, more complex meanings while remaining open to the imagination of the viewer. Small prints, however, could not compete with the visual impact of paired paintings shown as companion pieces. They remained objects for private contemplation or discussion in small groups. 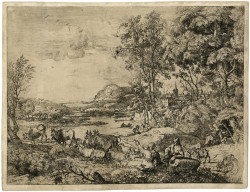 The technical approach in Le troupeau is unlike anything Claude had attempted before. It is likely that he drew a preliminary sketch for the etching, since he was able to arrive at the final image within just two states.10 The development between states is similar to what we see in the etchings of the 1630s: the tenor of the sky is polished, and the herd, the Classical architecture and the landscape are reworked to mitigate the initially oppressive mood. The movement and position of the herd in the landscape are shifted so that its strong diagonal emphasizes the spatial depth of the composition and calls attention to the architecture. Claude pulled a counterproof at an early stage, probably to check the progress on the plate.11

Like Le troupeau, Berger et bergère shows a greater concern with figures and their integration into the overall composition than we see in the earlier prints. He began it with an initial approximation, a state he immediately reworked and corrected with pen and ink.12 Though he had already composed a painting on this theme and recorded it in his Liber Veritatis, Claude felt compelled to revise his initial solutions as he worked toward a definitive etched version.13 He moved away from his model, eliminating the village in the middle ground and reinforcing the contrast between the immediate foreground and the figures. He smoothed the sky and foreground, reduced the trees, and brought the figures closer. Early states show the mood of the sky was initially more dramatic and the city in the background less distinctly visible. The changes produce an atmosphere of calm and make the image more overtly Arcadian. With these two prints—seemingly his only etchings of the early 1650s—Claude invented a means of disseminating Arcadian compositions and of attracting potential patrons. 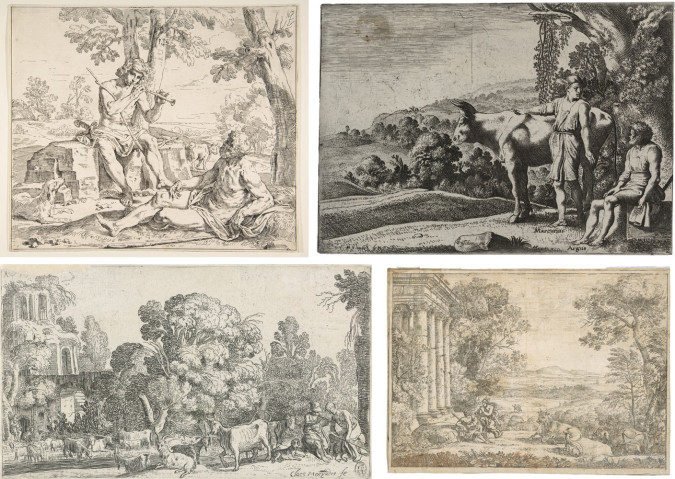 The singularity of Claude’s achievement becomes visible when his work is seen in the context of 17th-century printmaking. It is not known which artists Claude met in Rome or which works of art he saw, but he was certainly not alone in the practice of going into the countryside to sketch, nor in his desire to evoke Arcadia through etching—artists such as Nicolaes Corneliszoon Moyaert, Jan Both, Moyses van Wtenbrouck, Bartholomeus Breenbergh and later Jan Lutma all used prints for pastoral scenes and mythological narratives placed in Arcadian settings. The assertion of landscape as a self-sufficient subject really started with prints, and to a lesser extent, drawings. In painting, landscape on its own, without the legitimization of mythology or religious content, was not yet imaginable in France or Rome. Print artists working in the tradition of views of Roman ruins and architecture, however, began to expand the repertoire of subjects and compositional motifs, opening up new vistas of content for the landscape print. 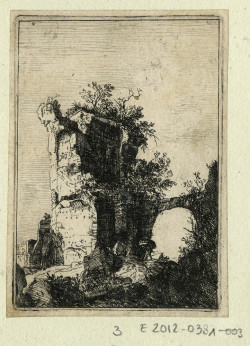 Mythology—most notably the story of Mercury and Argus—also offered a convenient device for entering the Arcadian landscape. A comparison of four prints—by Simone Cantarini (Fig. 7), Moyses van Wtenbrouck (Fig. 8), Claes Corneliszoon Moeyaert (Fig. 9) and Claude (Fig. 10)—all dating between roughly 1620 and 1650, makes clear how distinct Claude’s strategies and treatment of his subject were.14 All four prints show the protagonists in some detail (close up in the Wtenbrouck and Cantarini; at a distance but occupying an important part of the composition in the Moeyaert and Claude). Only Claude, however, chose to place them in an antique landscape. In this print, as in his other work, he links Classical architecture and pastoral elements, combining conventional architectural views of Rome with his own innovative rendering of landscape.

Claude pulled a counterproof of the first state of his Mercure et Argus (probably to facilitate implementation on the plate) and immediately overworked it to strengthen the pastoral effect,15 darkening all the foliage in the foreground to heighten the contrast with the adjoining section depicting Mercury and Argus. The overall aim was to achieve harmony within the etching and to embed the subject as deeply as possible within its pictorial context. The clouds, birds and other devices he used to break up the blank space of the sky attempted a degree of naturalism. Although the subject is mythological, it appears as an Arcadian scene. In most Roman landscape prints, such as the views by Bartholomeus Breenbergh (Fig. 11) or the landscapes by Jan Gerritsz. van Bronckhorst after Cornelis van Poelenburgh, the focus was on ruins. Although Arcadian landscapes did not require buildings, such architectural elements added sentimental value, which seems to have been Claude’s incentive. His pastoral prints, drawings and (to a lesser degree) paintings are characterized by their subtle rendering of mood. Like Jan Both (Fig. 12), Claude played with the horizon line and concentrated on the representation of light and atmosphere. Both was more concerned with accurately recording real landscapes than with transforming Rome into Arcadia, as Claude did throughout his career.

For artists of the following generation—Giovanni Francesco Grimaldi, Dominique Barrière, Abraham Genoels and Frans de Neve—his inventions were transformative. Landscapes made after 1650 grow more adventurous and more innovative, even while borrowing extensively from the new master: Claude. 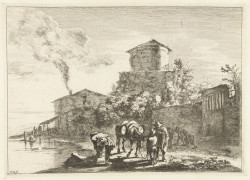