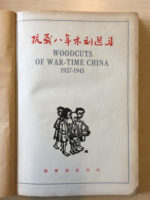 In a talk given at Jinan University in Shanghai in 1927, the leftwing artist Lu Xun (1881–1936) argued, “contemporary art describes our society, and even we are written into it. Previous art, like a fire across a river, had little to do with us. In contemporary art even we ourselves are burning.”1 Lu believed that artworks should enhance or transform social ideo-logies, and he initiated a serious debate over the role of modern art in the renewal of Chinese society.2 Speaking as one of the most prominent figures in Chinese literature and education, he called for a new form of art based on an ancient technology that would give voice to the people: the woodcut. The New Woodcut movement, broadly associated with the circle around Lu, emerged as the dominant mode of representation among progressive Chinese artists in the 1920s, ’30s and ’40s.

Lu’s influence was profound and long-lasting. Nearly 20 years after Lu’s talk, the catalogue of the influential exhibition “Woodcuts of War-Time China” (抗戰八年木刻選集) was dedicated to him3 (Fig. 1). Held in Shanghai in September and October 1946, one year after Japan’s surrender to Allied and Chinese forces, China’s first juried woodcut exhibition included 897 works by 113 artists and was broken into four chronological sections, covering phases of the Second Sino-Japanese War (1937-45).4

China, officially under Nationalist (Kuomintang, or KMT) control at the time of the exhibition, had fought with Japan sporadically since 1931. The full-blown conflict commenced in 1937 and key cities in China’s east quickly fell, prompting the KMT to join forces with the Chinese Communist Party (CCP), despite their mutual mistrust. The ensuing eight years of combat opened the way for the rise of the CCP, and for their eventual overthrow of the KMT in 1950.

The war with Japan also stimulated Chinese political art. New Woodcut had been influenced by international socially progressive art, and the prints included in the Shanghai exhibition show influences that range from Chinese folk art to European Cubism, Expressionism and Surrealism. Dramatic compositions, visible traces of the cutting knife, and expressive use of light and shadow echoed the emotions of the Chinese people.

The first three sections of the exhibition addressed experiences in Japanese-occupied China.5 This article, however, focuses on the exhibition’s fourth section, which covered the immediate postwar period from late 1945 to late 1946, as the alliance between the Kuomintang and the Communists broke apart and artists adopted visibly different styles and subject matter depending on their geographical situation. While some continued to explore the war’s trauma and its dark aftermath, others saw it as a purifying process, and strove to point their viewers toward a bright future. 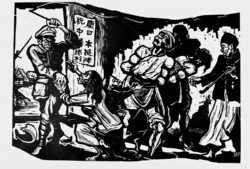 For Chinese New Woodcut artists working in the 1930s, the prints of European artists such as Käthe Kollwitz, Frans Masereel and George Grosz, reproduced in journals, had provided crucial inspiration. With their condensed compositions and focus on the suffering inflicted by war and poverty, these works offered an invigorating model for artists who wished to engage with social and political issues.6 Art historian Julia Andrews suggests that after the outbreak of the Second Sino-Japanese War, the idea of art as propaganda was fully embraced by artists of varying political orientations.7 After the war, woodcut artists further refined their techniques to create complex and imaginative images.8

Though KMT was recognized internationally as the legitimate government of China, it failed to maintain popular support after the defeat of Japan. In the words of historian Suzanne Pepper, “the discovery came abruptly that the KMT’s wartime prestige would be no measure of its post-war behavior.”9 Collaboration between KMT officials and the Japanese, ongoing corruption and inflation stoked public fury.10 Some of the exhibition’s most powerful images were directed, not against the Japanese, but at the failure of the KMT government to assuage the suffering of the Chinese people. Victory did not translate into relief from poverty and oppression.

Li Hua (1907–1994), one of the most influential artists of the New Woodcut movement, was one of the exhibitors. Working in the Japanese and later KMT-controlled regions throughout the 1940s, he produced many woodcuts protesting the Japanese invasion and the decaying KMT government. The jubilation suggested by the title of his print Celebrate the Surrender of Japan and the Victory of China (慶祝日本投降，中國勝利, 1945-6) (Fig. 2), is belied by the image: on the left, a soldier in KMT uniform brandishes a whip as an anguished woman kneels before him, her emotions vividly expressed through her distorted and emaciated body; on the right, a sleazy-looking man, dressed in typical Chinese landholder attire, holds a long smoking pipe while speaking arrogantly to two peasants who are bound with ropes. A crying child pulls at the legs of a wailing, bound figure; the other peasant’s head is lowered in despair. A dark figure in the background seems to be loosening the ropes on one peasant; he is barefoot, which suggests he is also at the bottom of society and is trying to help his suffering fellows. The threadbare appearance of the peasants makes a sharp contrast with their well-dressed oppressors. The clear implication is that though the war with Japan is over, injustice persists under the new regime. 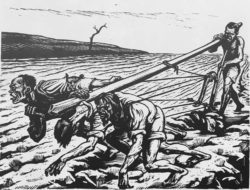 Another example of “dark” art by Li is the woodcut Struggles (掙扎, 1946) (Fig. 3), in which four barefoot men drag a primitive plow through a barren field. Their anguished expressions and contorted bodies, the sharp contrast of black and white, the strong diagonals of the furrows, and the lonely, leafless tree on the horizon all contribute to an atmosphere of bleakness and fear. These are among the many woodcuts in the show that reflect disenchantment, even fury, with the KMT. In the months following the defeat of Japan, frequent strikes and student protests inspired a surge of like-minded woodcuts. Pepper observes, “there were few sectors of Chinese society that had neither experienced nor witnessed at close hand the adverse effects of KMT rule.”11 Representations of disaffection addressed issues from inflation to police violence, hunger and government corruption.

During the war, Chinese artists had continued to produce woodcuts inspired by European Expressionism, as well as those that adopted visual motifs from traditional New Year pictures (nianhua), which had been China’s most familiar and prevalent form of shared imagery since the Ming Dynasty (1368–1644). Despite obvious links to the most conservative of Chinese customs, these expressions of hope for prosperity in the coming year12 were a highly versatile form of popular art in modern China.13 As early as 1940–41, in the Communist-controlled area of Northern Shannxi, artists had married nianhua imagery to New Woodcut styles to create a new genre of utopian art.

The celebratory atmosphere of Gu Yuan’s (1919–1996) 1946 woodcut We Support Our Own Army (擁護咱們老百姓自己的軍隊) is conveyed through a procession of sheep and goats, happy children, well-fed and dressed adults, and lavish amounts of red, green and yellow, the colors most frequently used in nianhua (Fig. 4). Peppered throughout are helpful soldiers in CCP Army uniforms. The message is neatly engineered: the CCP will protect the people in the manner of the mythical door guardians who safeguard families in traditional nianhua.14 Despite the explicit military presence, Gu eschewed any depiction of the human costs of war, concentrating on the cooperation of soldier-heroes and rural Chinese in constructing a happy future. The interplay between European-inspired woodcut and auspicious nianhua continued to produce effective political imagery through the late 1940s. Artists such as Yan Han (1916 – 2011), Li Qun (1912–2012), Xia Feng (1914–1991) and Zhang Wang (1916–1992) followed this hybrid artistic style and frequently published their work in pictorial magazines and art books. 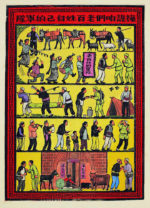 CCP-affiliated artists also used portraits of idealized political leaders as an avenue for picturing an imminent utopia (Fig. 5). Yang Yanbin’s (1916–2011) imposing 1945 woodcut portrait of Mao Zedong shows the young leader as powerful yet compassionate and anti-militaristic; one hand is folded into a fist forcefully placed against a table while the other is held out in benediction. Yang exploits the linear vocabulary of woodcut, using subtle and soft lines in the face (suggesting a leader who could be relied on to protect a family and ensure they were well-fed and clothed), and harder, more chiseled lines in the Sun Yat-sen jacket (conveying a determination to take on the dark forces menacing society). This image departs from the classical Chinese conception of an emperor wielding the “mandate of heaven.” It maintains the imperial sense of authority but emphasizes Mao’s humanity and individuality. By 1945 Mao had consolidated his dominance within the party and replicated the Soviet strategy of legitimizing institutional power through his cult of personality. With Mao in charge of propaganda, literature and artwork, artists, writers and journalists felt compelled to propagate his image. In contrast to the bleak vision of life conveyed by Li Hua and other artists, Communist prints emphasized rural hope and contentment. Mao’s guidelines, spelled out at the famous Yan’an Forum on Art and Literature in 1942, declared that artists “should primarily focus on representing the brightness” and that darkness should only be used as “the foil of the brightness.”15

Art for the People

Lu Xun’s passion for woodcut arose in part from the fact that print was a medium of multiplicity with the power to reach multitudes. According to Lu, woodcut “belongs to the mass, thus it is ‘secular’ in its essence.”16 The scholar Ye Shengtao (1894–1988) shared a similar opinion: “It is completely a folk art, which is to say, it is not from the studios of the literati.”17 For artists, the choice of medium could be nearly as important as the choice of style in declaring their political orientations. New Chinese woodcuts were meant to reach the proletariat, rather than the elite. At the same time, however, they arose from a cosmopolitan awareness of modern figuration. In the words of Sinologist Tang Xiaobing, New Woodcut artists “greatly extended the vocabulary, grammar, and versatility of the black-and-white woodblock print and promoted it as a superbly expressive and evocative common visual language of the modern age.”18

Unlike the CCP, which carefully strategized and exploited images, the KMT had no consistent central policy for coordinating art and politics. Harriet Evans and Stephanie Donald describe woodcuts produced in areas under their governance as “graphic reminders of mass insecurity, arbitrary violence, and personal trauma.”19 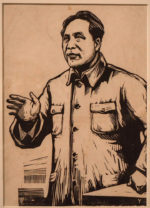 In September 1946, the Association of Chinese Woodcuts (中華全國木刻協會) published a statement in the Communist newspaper Xinhua Ribao (新華日報) that called for woodcut artists to keep fighting for democracy and freedom after the defeat of Japan.20

Woodcut workers should make the people’s will their will. The direction for today’s work should be oriented toward the people’s needs—obviously, [it is] also about fighting for democracy and freedom.21

The art included in the “Woodcuts of War-Time China” exhibition was intended to function as a weapon against enemies of the people, even while exploring new formal ideas and hybrid stylistic vocabularies. The last section—with its visible contrast between art focused on present trauma and that emphasizing the promise of the future—showcased the difference between CCP and KMT approaches to coordinating art and politics. It illuminates the divide that expanded into the Civil War that raged across the country for the next four years.