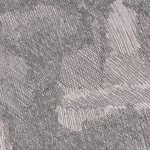 I first saw this print, Still Life with Vases, Bottles etc. on a table (1929), in the exhibition “Giorgio Morandi—Etchings” at the Tate Gallery in 1991. The exhibition made a great impression on me—I could go as far as saying that it represented an epiphany, for whilst I had seen a number of Morandi’s works in various museums and mixed shows, this was my first opportunity to see so many of his prints together. The power these images exerted was in such contrast to their modest scale and to Morandi’s seemingly innocuous subject matter: nondescript bottles, jugs and bowls, or the simple landscapes observed from the balcony of his summer house in Grizzana. The landscapes and the still lives seemed to be interchangeable, the still life accoutrements merely substituted by barns, trees and houses in the landscapes.

This etching measures only 14.5 x 19.9 cm (5 3/4 x 7 3/4 inches), and the image is realized through Morandi’s customary method of crosshatching. It is one of his most subtle prints, made during the period between 1927–1934 when he produced some of his most experimental works. Take any detail in this print and what is revealed is the fine web of etched lines, each line bitten so it maintains its individual clarity and doesn’t break down or merge with other lines. Morandi would make test plates to ascertain exactly how long a plate should be etched, very much like a photographer testing the exposure before printing. He knew that intaglio depended on the precise control of the acid and that for the majority of his prints, a single immersion was sufficient. He etched his own plates and proofed them on his small star-wheel press in his studio-cum-bedroom in the apartment on the via Fondazza in Bologna that he shared with his sisters. 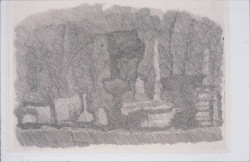 The image is particularly atmospheric; there are no discernible outlines, so the shapes of the objects seem to shimmer nervously and vibrate. The patches of crosshatching act like Cezanne’s brush marks, marking a space against which another patch of tone nudges up until it touches. The viewer wills the image into focus, but can only hold it for an instant before it dissolves into the manner of its making. While the composition is severely formal, like a family group photograph, the mark-making serves to disrupt and undermine this rigidity. The lines create movement across the surface, each patch of crosshatching having both weight and direction. When seen as a whole, the print tests the viewer’s capacity to read the image as representing the vases and bottles that make up the composition; in detail, the abstract qualities take over and the underlying orchestration of lines becomes apparent. By examining the detail, one can immediately see the impact such a print must have had on an artist like Sol LeWitt—for example his etching series Squares with a Different Line Direction in Each Half Square (1971)—or on more recent work such as James Siena’s No Man’s Land (2004), in which etched lines, simple at first, gradually build up a complex image. 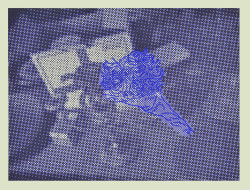 It is this oscillation between figuration and abstraction that has made Morandi such a pressing influence on such a wide variety of contemporary artists, despite the fact that his output—around 130 prints over a career spanning almost 40 years—is relatively modest. While some artists are drawn to the rigor of the restrictions that Morandi imposed on himself (his narrow range of subject matter, the exclusion of color, the technical limitations), others respond to the metaphysical quality that makes the commonplace seem charged with possibilities. For many, myself included, Morandi is an artist’s artist, the magician who shows you all his tricks and still keeps you spellbound.