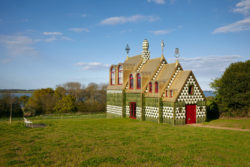 In May 2015 Grayson Perry unveiled his most ambitious and personal work to date, A House for Essex (2012–15), in the English village of Wrabness on the Stour Estuary in Essex, about 70 miles northeast of London. The two-bedroom house is the eighth building commissioned by Living Architecture, philosopher Alain de Botton’s not-for-profit organization, which invites celebrity artists and architects to design modern vacation rentals.1 Designed in collaboration with FAT architect Charles Holland, Perry’s contribution to this urbane endeavor was conceived, somewhat subversively, as a livable “temple” dedicated to a fictional working-class woman named Julie Cope.

According to her concocted biography, Cope (1953–2014) was a twice-married mother of two who died tragically when hit by a delivery motorbike at the age of 61. For Perry, Julie is the archetypal Essex woman: average, hardworking and imperfect, but resilient in the face of life’s obstacles.2 Although the building has become known in the media as the “gingerbread house,” and locally as “Julie’s House,”3 Perry’s title reveals its true subject: a particular English county and its blue collar women. A House for Essex and its related woodcuts—Six Snapshots of Julie (2015)—portray this geopolitical location not through topography or history but by evoking its inhabitants. Given its function as a short-term holiday rental, A House for Essex has the potential to bring well-heeled visitors into intimate contact with another kind of life, one they might not otherwise pause to consider,4 while the woodcuts invert the process, bringing Julie into other people’s homes, further penetrating the borders of class and cultural capital. 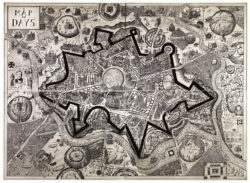 One of the Britain’s most visible and successful contemporary artists, Perry was born and bred in Essex, a place that is shorthand for a certain working-class brashness (not dissimilar to the way “Jersey” is used in the States). Describing “a county of near-mythic reputation in the British popular imagination” in her 2009 monograph on Perry, Jacky Klein observed:

Since the 1980s nowhere in the UK has been the butt of more classist jokes or clichéd caricatures: the wide-boy gangster; the boy racer with stereo pumping from his souped-up Cortina; the white-stilettoed, mini-skirt ladette, all bleached hair and bling. The stereotyping of “Essex Man” and “Essex Girl” came, of course, with a strong bias against the apparently tasteless working class.5

Perry departed Essex to study at Portsmouth Polytechnic, and after moving to London in the early 1980s he made several works that parodied Essex stereotypes, such as his 47-minute Super-8 film, The Poor Girl (1985), which includes a deliberately hokey plot about a murderer and a female cult of consumerism, and his Essex Man Leathers (1989), a self-designed biker outfit complete with a large schematic drawing of an erect penis, a tongue-in-cheek comment on the machismo commonly associated with biker culture.6 These early works, however, lack the elegiac tone of Perry’s observations on the life of Julie Cope. 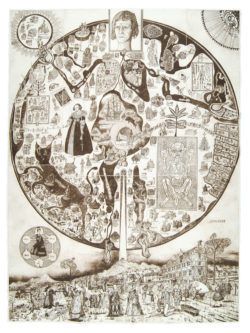 The ceramics and tapestries for which Perry is best known address subjects both personal and universal, from his own biography and transvestitism to broader issues of gender, sexuality, social class and the contemporary art world. He has long been fascinated by maps, especially those depicting “imaginary lands, feelings or social phenomena”; among the objects he selected for his 2011–2012 British Museum installation, “The Tomb of the Unknown Craftsman,” were works from the collection that exemplify cartography’s inherent subjectivity, such as a 19th-century sailing chart from the Marshall Islands, comprised only of sticks and shells, and a contemporaneous British map that shows only the major landmarks on the pilgrimage route between London and Canterbury.7

The artist’s first print was an etching, Map of an Englishman (2004), inspired by 16th-century Dutch maps and Emma Kay’s large drawing World Map from Memory (1999). It presents a sprawling fictitious island dotted with buildings, mountains, trees and rivers labeled “Love,” “Anger,” “Tender,” “Narcissism,” “Catharsis” and so on. Revealingly, the “Posh” peninsula (where the village of “Svelte” is just down the road from “Bulemic”) abuts the territory of “Bloke” (home to the church of “Car Accessories”). The surrounding seas include “Agoraphobia,” “Dementia” and “Delirium.” Perry explained: “A lot of people think it’s generally like an Englishman. It is an Englishman. It is me.”8 In the more recent Map of Days (2013), he offers a self-portrait in the guise of a fortified medieval town, whose streets carry names such as “Alpha Masculinity,” “Self-Sabotage,” “Intuition” and “Revenge.” These maps chart things as concrete as mountains and as elusive as our sense of self.9 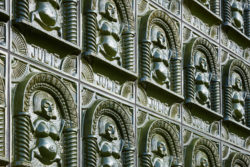 Perry’s Map of Nowhere (2008) was inspired by the Ebstorf Map, a famous 13th-century German mappa mundi that followed the medieval convention of mapping the world onto the body of Christ (the map was destroyed in World War II but was well documented).10 In Perry’s etching the artist is the center of his world and the circle surrounding his abstracted body is populated with tiny buildings, portraits, flora and fauna, each inscribed with a caption. While Map of an Englishman and Map of Days depict Perry’s emotional life in terms of a fictional topography, Map of Nowhere articulates navigation routes between private instincts and external relationships. A cluster of structures that descend along the artist’s left leg are labeled “Latest must-have,” “Logo board,” “Internet dating,” “Hot curator,” “Project space,” “Metaphor-deficient,” “Meritocracy,” “Academe” and “Metropolitan elite.” These are met with feelings inscribed within Perry’s corpus such as “Doubt,” “Hubris” and “Post-Ironic Sincerity.” In Perry’s etched maps, place is a metaphor for the psychological and social experience of the self. A House for Essex, however, uses the archetypal Julie as a metaphor for a place—Essex—and its position on the British socioeconomic map. 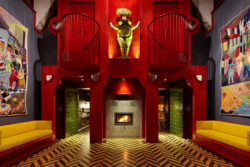 Although the life it commemorates is pointedly ordinary, Perry’s site-specific Gesamtkunstwerk is utterly extraordinary in its design. With its copper roof, arched gables, red French doors, patterned walls of triangular green and white tiles, and green ceramic reliefs of Julie as a nude goddess, the exterior is a quirky assembly of architectural elements from English country homes, Islamic architecture and medieval European relief sculpture. The interior is decorated with an array of works illustrating Julie’s life: tapestries, woodblock-printed wallpaper, a freestanding ceramic Julie goddess, and a Honda moped—supposedly the one that killed her—hanging from the living room ceiling. Its combination of vibrant colors—which architectural critic William Hall likened to “being inside a migraine”11 —and architectural styles is characteristic of Perry’s penchant for historical appropriation and flamboyant ostentation, and offers a fantastical testament to the artist’s virtuosic facility with multiple mediums. It also marks the culmination of his explorations of the personal, psychological and social implications of representing place.

A 2015 Channel 4 documentary, Grayson Perry’s Dream House, followed the project over the course of three years and makes clear that Perry considered local women both the inspiration for the house and its primary audience. In the planning stages, the artist spent many hours in cafés, hair salons and other local haunts, observing and talking with people about Essex women, gathering ideas for the life of Julie Cope. Throughout the building’s construction, he presented his plans to—and welcomed feedback from—the residents of Wrabness at regular town meetings. When it was finished in 2015, Perry invited six “Essex Julies” of different ages and professions to accompany him on a bike tour of the county that lasted several days and ended with a private preview of the house. The evening before the preview, Perry and the Julies swapped life stories over wine, discovering a range of shared experiences, including career changes, failed marriages, socioeconomic difficulties and familial tensions. The film culminates with the Julies’ first visit to A House for Essex, which brought one of the women to tears.12 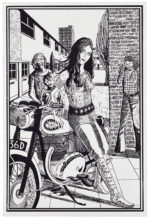 Biographical commonalities are instrumental in the production of what anthropologist Arjun Appadurai calls “locality,” a phenomenon that is “primarily relational and contextual rather than . . . scalar or spatial.”13 For Appadurai, locality is, above all, a social and phenomenological quality—the result of a community’s shared experiences. Thus a “local” community is not characterized by geographic proximity alone but by the members’ socioeconomic or cultural commonalities.14 As a distillation of the shared experiences of Essex women, Julie Cope is more than a fictional character—she is an expression of Essex women’s locality. She—and, by extension, the house that is her shrine—mirror their lived experiences.

The house exists only in Wrabness, but pieces of it have been produced in multiple, enabling Julie’s life story to travel: one can purchase four-meter-high tapestries of her weddings or modest tea towels that map her life in Essex. By far the most thorough treatment, however, is the woodcut series Six Snapshots of Julie, an episodic visual biography, printed in both color and black-and-white editions, based on the wallpaper that lines the living room of Julie’s house. Each print represents one decade of her life; we see her grow from a knobby-kneed child into a rebellious biker teen, a responsible mother, an independent woman, and finally a happily remarried, middle-aged, world traveler. 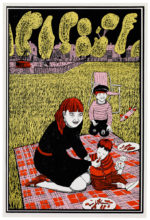 The Snapshots bypass most of the darker details, such as her first marriage to an unfaithful husband and her untimely death. The garish appearance of the color impressions—most noticeable in the mustard yellow, black and blood-red skies—does hint at her disadvantages and inevitable demise, but the focus is elsewhere: despite inhospitable surroundings, Julie appears positive and cheerful throughout. Julie Cope—so aptly named—is the embodiment of perseverance and making do.

The last two woodcuts picture Julie’s happy relationship with her second husband, Rob, and the final image shows her in front of the Taj Mahal, which was Perry’s conceptual inspiration—he often calls the house “an Essex Taj Mahal”15 or “the Taj Mahal on the River Stour.”16 In the fictional account, A House for Essex is not Perry’s work of art; it is the shrine Rob has built to his deceased wife. And, like the Taj Mahal, Perry’s house lives on primarily as a tourist destination. 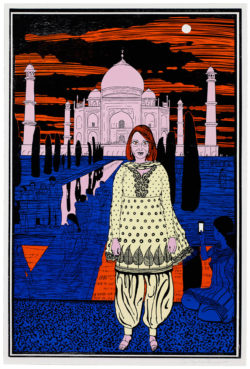 Unlike the formal, stylized tapestries (Julie and Dave, Julie and Rob, A Perfect Match and In Its Familiarity Golden),17 the woodcuts adhere to the conventions of snapshot photography, marked by the tension between Julie’s contrived poses and the candid immediacy of her surroundings. The scenes themselves are almost entirely unremarkable, which is the point. Like snapshots, which are not self-explanatory containers of meaning but touchstones for anecdotal stories, Perry’s Six Snapshots of Julie require narration.18 As we recite her story, we continue to do the work of A House for Essex—recognizing the valor and resilience of lives that are rarely celebrated in any public forum.

For Perry, the act of representing a place requires an intimate understanding of its people—their life stories, cultural customs, social networks and self-images. Perry’s monument to the “trials, tribulations, celebrations and mistakes of an average life”19 is simultaneously a portrait of an individual, a community and late 20th-century Essex. Both the building and its mobile artifacts offer tribute to the popularly disdained residents of Essex, and do so through a design language that is at once local and cosmopolitan.20 Their purpose is neither idyllic escape, nor a classist version of exotica, but a celebration of locality and a window into Essex life—or at least Perry’s version of it.