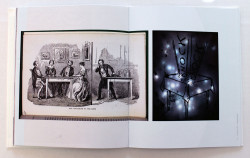 In an email sent to subscribers last April, the founders of Printeresting—Amze Emmons, R.L. Tillman and Jason Urban—announced a forthcoming project: a short-term “multi-platform, crowd-sourced symposium,” accompanied by the news that their beloved blog-based website of seven years would be closing down. “Printeresting is not ending, it is evolving,” they explained, citing a new emphasis on research, community and collaboration, as well as a desire to “slow down, work carefully on our ideas, and present those ideas in a deliberate way.”1

Emmons, Tillman and Urban promise to present a new theme-based project each fall during a predetermined month-long period. The first of these, titled Ghost, unfolded between 7 October and 7 November 2015, with a final wrap-up on 2 December. Each project has three components: real-world events, a related (though discrete) publication and a website that evolves over the term of the project. This hybrid model was developed in response to “changes in the way people consume online content,” explains Tillman.2 Emmons elaborates: “We noticed that in this cultural moment, most folks aren’t enjoying the online reading experience…Web content has become…more fragmented and less immersive.”3 For Ghost, Emmons, Tillman and Urban sought contributions from their extensive network of artists, designers, curators and critics, both independent and from non-profit institutions. The three Printeresting founders coodinated this flurry of activity, designed the publication and website (http://ghost.printeresting.org), managed the project’s social media presence (#printGHOST), and contributed their own writings, musings, events and posts. 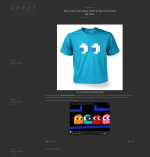 R.L. Tillman, “Inky is the Cyan Ghost, which is why we love him the most” (2015), page from the Ghost project website: http://ghost.printeresting.org/inky-is-the-cyan-ghost/. Published by Printeresting.

The 2015 publication, which is perfect-bound and resembles a high-end magazine (available through the print-on-demand service Magcloud for $20), contains essays, artist profiles and original projects. It delights in the possibilities of a physical object: texts meander across the page in assorted orientations, appear torn and pasted, pile up in diaphanous layers and jump off the page in various fonts and point sizes; the index is inverted. Intermezzi in the form of two-page spreads of abstract gray patterns allow the reader to breathe and contemplate before moving forward to the next feature. Urban muses on ghost limbs, prostheses, and 3-D printing; Tillman discusses the “afterlife of print” in the digital age; and Emmons (with others) investigates the theoretical implications of the “ghost” impression. Between these meaty essays are full-page spreads of various artists’ work, some with accompanying text. The publication closes with several spreads of original works and texts by a handful of contributors based on mesmerism and 19th-Century spirit photography. It is anticipated that the publication will take different formats each year in an effort to explore the various physical incarnations of the published object in contemporary culture.

The Ghost website does not duplicate the content of the ink-on-paper publication, but instead features brief musings, links and short commentary, all loosely related to the theme. The organizers explain that they were interested in “challenging the divisions between print and online” content, playing to the strengths of each platform. On the website, we find links to video projects, Instagram-like visual posts with anecdotal commentary, records of events and activities, short presentations of projects and exhibitions, and cultural observations. There are also posts that present or respond to content in the hard-copy publication, linking the two arms of the project. Each post is filed under category headings such as “Artwork,” “History/Culture,” “From the Publication,” and of course, “Uncategorized,” which serve as signposts through which visitors can organize content and navigate the site. Going forward, each year’s project will have its own website and dedicated URL: “Our hope is over time to generate a series of topical sites under the Printeresting umbrella.”  Content will be posted during the chosen month of activity, then serve as an online archive and resource. 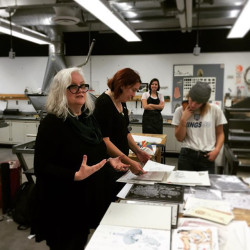 As a compliment to these publishing activities, each year’s project will also include real-time events in disparate locations that are designed to “activate interest on a local level.”4 The 2015 events included receptions, class projects, a site-based installation, film screenings, studio jams, and interactive art events/projects in New York, Philadelphia, Minneapolis, Pittsburgh, Kansas City and Chicago, among other locations.  One of the most complex and elaborate projects was an extended artists’ book treasure-hunt activity titled “Ghost Map” that took place throughout Italy. Descriptions and records of this and other events are filed under the “Ghost Project” heading on the website.

Printeresting.org’s 2008-2015 blog website will remain accessible for the near future at a new URL: http://archive.printeresting.org. The organizers intend to find an institution that can serve as caretaker of the online archives for the long-term, both for the original website as well as its new yearly projects.

As with Printeresting.org, the INK blog’s lifespan has come to a close and this will be the final post. Heartfelt thanks to all of my readers over the past five-and-a-half years and to those who offered ideas, gave interviews, helped with images, provided feedback and otherwise lent support. I will remain a regular contributor to Art in Print and will occasionally write print-world updates as well as reviews and articles. Posts that were originally published on the Art21 blog are available online for the time being (http://blog.art21.org/category/columns/ink-notes-on-the-contemporary-print/), and the Art in Print website will likewise continue to host archived blog posts.