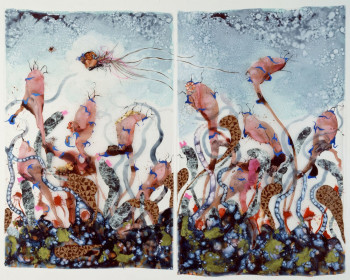 In October, INK examined some of the ways ephemera have permeated the art world, from exhibitions of original ephemera to musings on the demise of the printed newspaper; this month’s post continues the conversation with an investigation of recent and current exhibitions. In Philadelphia, “Remnants of Everyday Life: Historical Ephemera in the Workplace, Street, and Home” (The Library Company, closed January 3, 2014) provided an essential overview of a century and a half of printed miscellany. In New York, “Rituals of Rented Island: Object Theater, Loft Performance, and the New Psychodrama—Manhattan, 1970–1980” (Whitney Museum of American Art, through Feb 2, 2014) shows how ephemera played a critical role in documenting and promoting the work of artists in the pre-digital era, similar to a pair of exhibitions earlier this year titled “Please Come to the Show: Invitations and Event Fliers from the MoMA Library,” Part 1 and Part 2. At the Brooklyn Museum, “Wangechi Mutu: A Fantastic Journey” (through March 9, 2014) is the first major US exhibition of the Kenyan-born American who elevates everyday detritus to the ethereal, without cutting ties to its humble origins. Together, these exhibitions offer insight into the changing role of ephemera in 21st century culture.

By their very nature, ephemera are taken for granted in their time, but those that survive provide insight into the preoccupations of the age and illuminate our collective past. The Library Company was early to recognize this, acquiring an important collection of Revolutionary War materials in 1785, and has since built its collection of American ephemera into one of the most important in the world. “Remnants of Everyday Life: Historical Ephemera in the Workplace, Street, and Home” provided an overview of its holdings from the late 18th to the early 20th century (the exhibition is a by-product of the organization’s recent digitization of some 30,000 pieces of ephemera). The 19th century witnessed a number of technical advances in papermaking, printmaking, and photography that allowed commercial printing to explode; the exhibition traces the history and impact of these major developments. Featured items illuminated technological advances, such as the invention of the platen press and chromolithography, as well as efforts to standardize the industry (typography, design, and job printing manuals). Other curios illustrated minor inventions and trends that followed: the mailing envelope, square-bottomed shopping bag, business card, photographic calling-card portraits, personalized stationery, custom menus, postcards, and the stereograph. Printed puzzles, board games, calendars, almanacs, scrapbooks, bookmarks, and photograph albums, which became attainable to most 19th century consumers, were also on display. 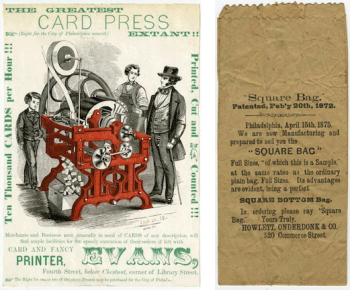 While a number of these Victorian printed formats remain viable, others have become obsolete. Retailers and publishers poured resources and ingenuity into printed promotional materials in a way that is unheard of today. Palm-sized, chromolithograph handouts such as the exquisite, die-cut butterfly promoting the once-grand Philadelphia department store John Wanamaker & Co., have been replaced by cheap fliers. The elaborate paper diorama circus inserted in The Philadelphia Press to promote circulation has no parallel in contemporary newspapers.

As we transition to primarily digital communications, certain forms of printed ephemera will fade. “Rituals of Rented Island” offers a fascinating view into the revolutionary performance art movement in Manhattan in the 70s and 80s and the manner in which artists used printed matter to promote and document events. Posters, fliers, mailers, performance scripts, sketches and dog-eared photographs accompany and enrich the costumes, props, films, and stage sets. Together, they approximate the vitality and originality of the movement.

“Rituals” would be sorely lacking without the ephemera. For most artists (the exhibition is organized by performers/schools), the scripts, posters, and announcements help viewers complete the picture, intellectually and visually. The area dedicated to Yvonne Rainer’s performance this is the story of a woman who… (1973) contains the following: a projected film of the performance (by Babette Mangolte), photographs, the original announcement (including dates and admission price) and a full script. The script provides particular insight into Rainer’s thought process as it includes a stage diagram, set specifications, approximate length of performance, and photographs of specific moments throughout the piece. 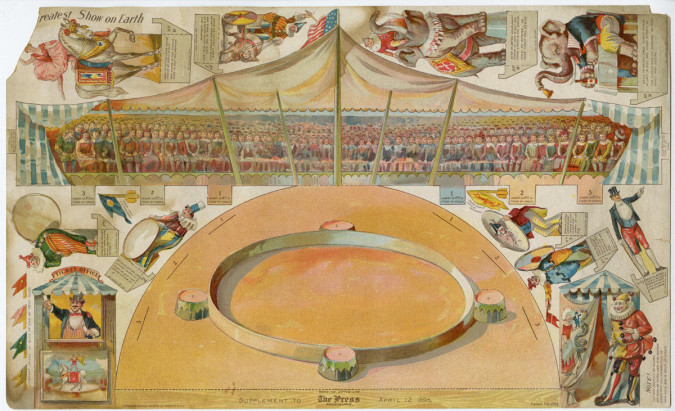 Ephemera are especially important in the area dedicated to Ralston Farina. Little else remains of his work, as he did not allow himself to be filmed and photographs of his work are rare. The Farina display is a paper trail of sketches, typewritten pages, posters, flyers, announcements, ticket stubs, press releases, mailers and a handful of photographs; in the absence of film/video, a handful of personal accounts of Farina’s performances are provided on a photocopied takeaway. It is hard to imagine that some future re-creation of a 21st artist’s work would rely so heavily on printed materials. While some formats (such as programs and posters) remain efficient means of communicating information in the physical world, virtual communications have almost entirely superseded mailers and letters. Furthermore, it would be nearly impossible for an artist working today to avoid being filmed and uploaded. 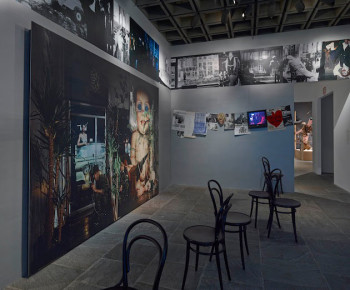 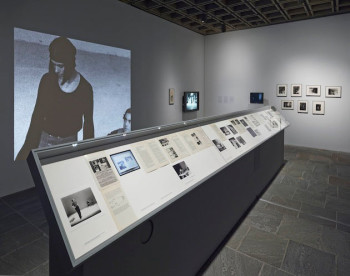 The fundamental role exhibition announcements once played was also apparent in a pair of exhibitions at MoMA earlier this year—now online—titled “Please Come to the Show: Invitations and Event Fliers from the MoMA Library,” Part 1 (ca. 1960–80) and Part 2 (ca. 1980–now). Unlike the majority of printed mailers produced today—which are increasingly generic and rapidly diminishing in number—those of the recent past were sometimes original creative expressions in themselves that gave information about what to expect and enticed you to see the work. Examples by Warhol, Oldenberg, Kaprow, Tinguely, Yves Klein, Piero Manzoni, Nan Goldin, Mike Kelley, Keith Haring, Martin Kippenberger, and Chris Ofili make one yearn for this diminishing, minor art form. In the exhibition catalogue Extra Art: A Survey of Artists’ Ephemera, 1960–1999, the late Steven Leiber notes that this type of material has suffered from “institutional and critical neglect” (Santa Monica: Smart Art Press, 21). The online presence of “Please Come to the Show”—which invites researchers “to seek out our ephemera files and documents that are waiting to be explored”—is a step towards addressing this neglect, as is the appointment of an ephemera expert, David Platzker, as a curator in MoMA’s newly-formed Department of Prints and Drawings.

While museums and curators have been including ephemera in exhibits, artists have incorporated it into their unique works, a practice that began over a century ago (Picasso’s Man with a Hat and Violin (1912) is an early example). Artists have used ephemera for purely visual qualities and to reference wider cultural phenomena. The Brooklyn-based Kenyan artist Wangechi Mutu does both to dazzling effect. Her exhibition at the Brooklyn Museum, “Wangechi Mutu: A Fantastic Journey” (organized by the Nasher Museum of Art at Duke University), spans more than a decade and includes works on paper, sculpture, site-specific installation, video, and sketches. The colorful, collage-based work quickly catches the eye and then reveals its unsettling cultural underpinnings upon closer examination. In this way, Mutu’s use of photomontage is related to that of Dada and Surrealist artists (especially Hannah Höch) who likewise juxtaposed printed images in disquieting ways.

Mutu’s mutated, yet beautiful creatures are not of this world. Their distorted bodies are built from snippets from pornography magazines, sales catalogues and glossy newsstand periodicals, then embellished with ink, paint, glitter, pearls, mylar, sequins and decorative papers. At once sublime and repellent, they suggest a critique of the damaging prejudices wrought by public perceptions of black femininity. More broadly, Mutu’s androgynous figures reference the amalgam of cultural influences that inform all contemporary identities. Meanwhile, the psychedelic flora that surrounds these beings (and that is the subject of Funkalicious fruit field, 2007 – illustrated top) can be seen as marking the environmental impact of the very ephemera from which they are composed. 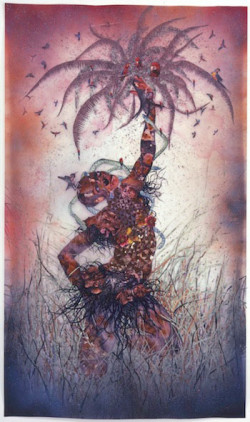 In a recent interview with Heather Russell of artnet, Mutu offered thoughts on the proliferation of ephemeral printed matter in the digital age. Speaking of her sculpture Suspended Playtime (2008/2013), which is comprised of dozens of small bundles wrapped in black trash bags, hung from the ceiling, she states, “I was attuned to how much we throw out, how many things we consume and buy and let go of at any given moment and I started making these balls [out of garbage bags] and stuffing them with junk mail in my studio…it’s insane, the amount. The more things you order [online], the more you receive catalogues for things you don’t want.”

Mutu’s comment reaches to the heart of the irony of printed materials in the Internet era. While a number formats have faded, others have multiplied into absurdity. Artist and curator Marshall Weber, who oversees Brooklyn Artist Alliance’s collection of ephemera, observes, “The past decade has seen the demise of mail art, exhibition catalogues, exhibition announcements, and political and gig posters… but the sticker, card, broadside, and flyer are on the rise.” Weber has witnessed this shift at political gatherings and rallies around the world, yet he feels strongly that printed ephemera will remain a viable medium for his own practice and others’ as we venture into an increasingly virtual world.  “As an artist, I am interested in materiality….We imagine that the digital audience is huge, but it’s still only a small fraction of consumers of published art.  The forms printed materials take may change, but the demand will remain.” 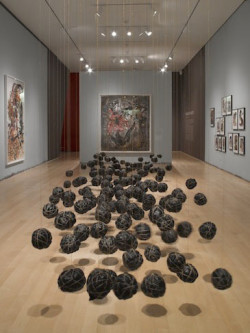 The editors of Printeresting.org—who have also expended considerable personal energy on this subject as artists, writers, editors, and curators—second Weber’s observations. R.L. Tillman says, “The printed poster, the pamphlet, the takeout menu: all of these things are perfect at what they do. So we’ll have them for a while.” Amze Emmons acknowledges, “On one hand, certain kinds of printed material appear to [be] waning in popular use. But on the other… the growth of print-on-demand technology has enabled explosions of other types of printed ephemera. Artists have moved in to respond and capitalize on these new audiences and technologies, as the explosion of artists’ books and ‘zines (and every other form of printed multiple you can imagine)… illustrates.”

In popular culture, Emmons points out that the decline of printed materials has evoked “consumer nostalgia for hand-printed material which has created a resurgence (and boutique upgrade) of some printed ephemera that seemed on the verge of digitization, like business cards, wedding invitations, note cards, calendars, gig posters, etc.” Likewise, Dada and Fluxus materials were free or inexpensive when they were printed, but command very high prices on the market now.  Weber notes an uptick in “obsessive collecting” in this category that is informed by “a consciousness that certain aspects of print culture are vanishing.”