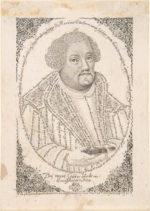 Buried in a volume that functioned as both an album amicorum and a collection album amassed by the Swiss politician Hans Wilpert Zoller (1673–1757) is an engraving by the early 18th-century artist Johann Michael Püchler the Younger1 (Fig. 1). When the album was catalogued for sale in 2006, nearly all its 54 drawings and 3 prints were identified, but despite being published as Püchler by Robert Zijlma in 1992, the engraved portrait of Martin Luther was misattributed to the even lesser known Dutch artist Johannes Georgius Otto.2 Although Püchler and Zoller were contemporaries, and Zoller had traveled extensively in the region where Püchler was active, it is possible that even Zoller did not know the attribution of the unsigned work. Nonetheless, its elaborate engraving demonstrates a command of calligraphy and ornamental forms that is characteristic of Püchler’s portrait style, which invariably includes flowing lines of micrographic text.