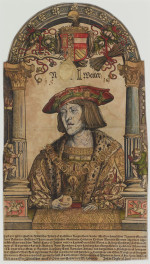 The British Museum holds an anonymous woodcut portrait of Holy Roman Emperor Charles V (1500–1556; reigned 1519–1556) printed on parchment, inscribed “1519” in pen and ink and decorated with water-based paints and gold (Fig. 1). Gold was usually applied to prints as paint or gold leaf, and only once since the woodcut’s first description in 1862 has anyone suggested its gold was something out of the ordinary: in 1921 Campbell Dodgson wondered if it were printed.1