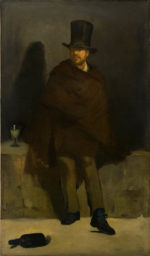 Why did Édouard Manet choose to send an almost life-size painting of an alcoholic vagrant to the prestigious Paris Salon in 1859 (Fig. 1)? It was his first attempt at the Salon, and it failed. At 27, having left the studio of Thomas Couture in 1856, his six years as an art student were behind him, he had set up in a studio of his own, and had spent two months in Italy, immersing himself above all in the art treasures available in Florence.

Couture was an independent teacher, not a member of the Académie des Beaux Arts, and had achieved early fame with his classical orgy, Romans during the Decadence, a huge, moralizing history painting with political overtones that had been a sensation at the Salon of 1847 (Fig. 2).1 Between 1850 and 1856, Manet had been something of a thorn in Couture’s side—a precocious, independent and sometimes rebellious student, unafraid to speak his mind. He had clashed with the master on more than one occasion, but in spite of their previous, somewhat stormy relationship, Manet wanted to show his Absinthe Drinker to his former teacher before sending it to the Palais de l’Industrie on the Champs-Elysées for judgment by the Salon jury. Couture’s response was crushing: “My dear fellow, there’s only one absinthe drinker here, and it’s the artist who painted this crazy piece”—a response that brought their relationship to an end.2