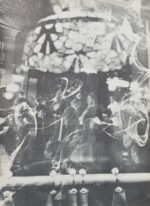 Detail of page from Saloon Society: The Diary of a Year Beyond Aspirin (New York: Duell, Sloan and Pearce,1960). Collection of the International Center of Photography Library, New York. Photo: Elliott Mickleburgh.

Saloon Society: The Diary of a Year Beyond Aspirin
By Bill Manville, photographs by David Attie, book design by Alexey Brodovitch
124 pages
Published by Duell, Sloan and Pearce, New York, 1960.

Parties, parties, time going, more people arriving, the years swinging along, it was like a lottery. Every once in awhile, the wheel stopped, you looked up, the guy next to you at a party he had a book published, he was a winner, next someone else you knew made a hit single in a nightclub. Another winner. Or a guy became a big-time hood—we had them, too. But all the time, you know, it didn’t matter, the wheel would start to spin again, spinning, spinning, the months, the people, the girls and the parties, time went, winter, summer, all spinning, spinning. A lottery. As long as you stay down here, I guess that’s the feeling, long as you stay down here, you still have a chance to win.
—Bill Manville, Saloon Society: The Diary of a Year Beyond Aspirin

In the late 1950s, Bill Manville, an aspiring author, was working as a copywriter on Madison Avenue. He was a regular fixture in Jack Kerouac’s social circles and had established himself within the Greenwich Village literary scene. In 1958 Manville began writing what became a popular weekly column in the Village Voice titled “Saloon Society”—a chronicle, satirical and presumably autobiographical, of a group of drinkers’ escapades at parties and local haunts.

It was around this time that David Attie, a commercial illustrator, met Alexey Brodovitch, the long-time art director of Harper’s Bazaar. Photography was beginning to dominate over illustration in magazines and advertising, and for Attie this meant learning to use a camera or losing his job. Brodovitch was teaching an infamously rigorous photography course at the New School, and Attie attended. The story goes that one night before a critique Attie had inadvertently overexposed all of the photographs he intended to present at class the next day. In a last-ditch effort to salvage his work, he began to layer all the negatives, one atop the other, and re-exposed them; what he ended up with was an ethereal, impressionistic montage. Brodovitch loved it—so much so that he gave Attie an assignment to develop similar montages for Truman Capote’s novella, Breakfast at Tiffany’s, set to debut in Bazaar that year (1958).1

The 1960 book Saloon Society: The Diary of a Year Beyond Aspirin brought together selections from Manville’s columns, photomontages by Attie developed to accompany the text, and a design by Brodovitch. A bit larger than a standard trade hardcover (10 in. by 7 1/2 in.) and 124 pages long, it is not dense with writing. Brodovitch’s layout is spacious and unambiguous; the type is set in negative spaces above or below the montages, or within them, sometimes obscured by clouds of cigarette smoke. Each chapter begins with a large, block-style drop cap reminiscent of the signs for establishments in which Manville’s stories and Attie’s pictures are set: the Minetta Tavern, the San Remo, the Riviera. The result is a profoundly effective engagement between art and language.