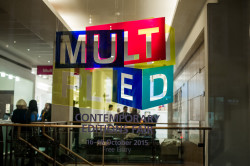 Scene from the Multiplied Fair, London (2015). Courtesy of Christie’s Multiplied.

Alongside the London Original Print Fair of late spring, Multiplied looms large in the calendar of British printmaking. A contemporary editions fair held at Christie’s during Frieze week in October, Multiplied is the younger fair in every sense: 2015 marked its sixth appearance and the London Original Print Fair’s thirtieth. Multiplied also shows contemporary work only: the emphasis is on production, and the exhibitors are publishers and primary dealers. Much of what is on show is so new that the ink has scarcely dried.

From a historical perspective, auction houses’ association with modern and contemporary art is relatively recent. And the Christie’s premises at South Kensington, often the haunt for antique furniture and old master paintings, still seem an improbable site for material that is this hot off the press. So the annual transformation of Christie’s during Multiplied is remarkable: its walls, usually gray, become white-cube white, and suddenly there is a fair preoccupied with the here-and-now (spurred on by the appearance of an unusually good café—a serendipitous nod to the neighboring Victoria and Albert Museum, perhaps, which first made that inspired connection between culture and refreshment).

For a while it has been modish to splice the contemporary with the historic, something that has happened in parallel with Multiplied since 2012, when Frieze Masters first supplemented Frieze London. Multiplied’s exclusive focus on contemporary work, in a venue often devoted to historic objects, makes it an interesting counter-point to that trend. And in the heady Frieze-week context, Multiplied’s relative affordability is also conspicuous—if the present art fair age is associated with decadence and galling inequality, Multiplied separates itself as altogether more accessible: its prices start low (around £50), admission is free, and the event is weighted around the weekend. It could even be visited remotely this year, with the introduction of an online platform, Multiplied Selects. Art fairs have clearly made the gallery business increasingly peripatetic, and the Internet pulls in the same dislocating and dematerializing direction; in this respect, creating an online annex to the fair makes a lot of sense, especially for an auctioneer with such strong online presence.

A growing number of public, nonprofit art institutions have turned to editions to raise money, and Multiplied included among its stands a significant number of art school and museum/public gallery publishers (another quality slightly counterintuitive in a location ordinarily concerned with the secondary market). This year there were stands from the Whitechapel Gallery, Nottingham Contemporary and the Liverpool Biennial as well as the Royal Academy, the Royal College of Art and Made in Arts London, a University of the Arts vehicle for work by students and recent graduates. Given that all the exhibitors, even the most commercial, support new editioned projects, they are much more embroiled in the making side of art than those at other fairs. Perhaps as a result, Multiplied has a certain joyous camaraderie—of all art fairs I find it one of the friendliest.

As might be expected when this many works appear together, the editions were too heterogeneous to allow a meaningful analysis of the state of the discipline today. Suffice it to say that editioning is in good health and remains an expansive territory that accommodates both the most conceptual and aesthetic peninsulas of contemporary art. The London-based publisher Used Paper made a noticeably strong debut with artists including Susan Collis and Oliver Tirré, and—acknowledging national partiality—I was pleased to see an excellent stand from Art Seen, a gallery from Cyprus that showed some particularly elegant work by Jost Münster and Alison Turnbull. With heavy footfall, signs of decent sales, and the inclusion of a program of artist and curator talks at this year’s fair, Multiplied was clearly in its stride. Gaps are sometimes more easily identified after having been filled; in Multiplied Murray Macaulay, the fair’s director, has created a celebration of editions that now seems a very necessary element of London’s Frieze week.