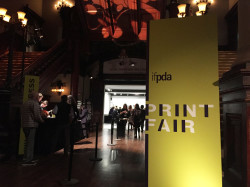 New York Print Week was boisterously back this year, with unprecedented numbers of visitors to the IFPDA Fair uptown, the revitalized E/AB Fair downtown, symposia, lectures and dozens of exhibitions in galleries public and private, stretching from the Lower East Side to Morningside Heights and beyond to the outer boroughs.

Serious, educational, smart and sometimes thrilling, the 23rd iteration of the IFPDA fair filled the grand space of the Park Avenue Armory for four warm (if damp) days, with 89 exhibitors, 10,000 visitors and tens of thousands of works of art, from Old Master engravings to works fresh off the press (with the occasional drawing and sculpture for good measure). Brisk sales were reported as of the opening night, which was also distinguished by Mike Bidlo’s recreation of Piero Manzoni’s 1961 performance Carte d’autenticità—willing attendees were signed, declared living works of art (of various duration), and given (appropriated) certificates to that effect. 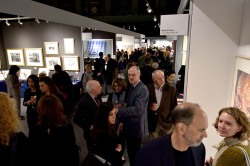 Newcomers to the fair included London’s Pauper’s Press, who showed subversively seductive work by Stephen Chambers, Mat Collishaw and Mai Thu Perret. Meanwhile, Old Master dealers such as C.G. Boerner and David Tunick were replete with rare states by Dürer and Rembrandt. Redfern Gallery’s display of rarely seen work from the 1930s by Anthony Gross was among a number of rewarding, mini-historical exhibitions on view. 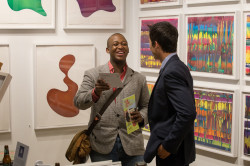 Spencer Finch’s large aquatint grid—a meditation on the chromatic universe of the Wizard of Oz—was a vivid presence in the Paulson Bott booth, while Durham press presented a weighty portfolio by Hurvin Anderson. Carolina Nitsch debuted Almanach 67, a dramatic suite of woodcuts by Tal R as well as a set of mysterious monoprints by Alexis Rockman filled with translucent dinosaurs, mammals, crustacean, insects and diatoms. New Baldessari editions could be seen at both Gemini and Mixografia.

The E/AB Fair lived up to its reputation as the funkier counterpart to the IFPDA’s more formal demeanor, gathering more than 50 exhibitors in the old 1980s nightspot The Tunnel, now refurbished and sparkling. Coordinated by the Lower East Side Print Shop, this year’s fair was curated by Jeff Bergman, the Director of Pace Prints, and included book publishers and ephemera dealers, as well as eminent printshops such as ULAE and Harlan and Weaver.

There were rare multiples, books and prints of all sizes and ambitions by artists such as Kiki Smith, Ryan McGinness, Mickalene Thomas and 2015 MacArthur Fellow Nicole Eisenman. Participating printer/publishers included Aspinwall Editions, Bleu Acier, Center Street Studio, Oehme Graphics, Wingate Studio, Jennifer Melby and Baron/Boisanté & Om from India, among many others. (Look for reviews of editions from these and many other printshops in the March issue of Art in Print.) Kayrock Screenprinting and Booklyn helped keep things lively. 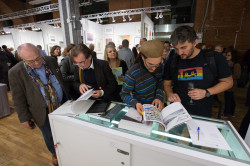 Together the two events continue to offer a place for established and emerging artists, print shops and dealers to connect with their expanding audience.