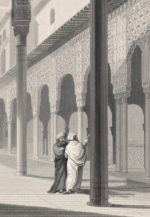 A good rubric has its delights, and Art in Print often revels in the unexpected patterns that arise as essays and artworks orbit a conceptual nucleus. But the world, as Robert Louis Stevenson has mentioned, is so full of a number of things, it seems important periodically to stop and look around. And so, at least once a year, we open the door to windfall: new research, books and exhibitions whose very diversity says more about the life of art and images than any ordered planting can do.

Thus this omnibus issue wanders across two continents and five centuries, stopping to look in on Hercules Segers in 17th-century Amsterdam, drawing mountains he never saw; on the Irishman James Cavanah Murphy, inventing a trans-temporal Andalusia in which 15th-century Moors and 19th-century Spaniards stroll together in defiance of historical fact (Liza Oliver); on Julian Stanczak in 20th-century Cleveland, using chromatic geometries to recreate the light of his African childhood (Linda Konheim Kramer).

In Los Angeles, painter Jonas Wood speaks with master printer Jacob Samuel about baseball, Picasso, Ed Ruscha and what happens when an artist habituated with blocks of color is told to work with black line and white paper.

Unexpectedly, perhaps, Romanticism looms large. In her review of The Enchanted World of German Romantic Prints 1750–1850, the long-awaited catalogue for the Philadelphia Museum of Art’s eponymous 2013 exhibition, Marsha Morton calls attention to the movement’s celebration of the internal life of imagination, and also to the ways in which artists and poets traded in nostalgia and courted nascent nationalist tendencies.

The long shadow (or light-beam, depending on your persuasion) cast by Romantic artists and ideas reaches deep into contemporary art. Reviewing the book Anselm Kiefer: The Woodcuts, Christian Rümelin addresses the artist’s controversial recursion to German myths and landscapes that were key to that earlier “enchantment,” and were also effectively emblematized by Nazism. My own essay surveys the offset prints, photographs and multiples of Gerhard Richter and Sigmar Polke; these bear none of Kiefer’s conspicuous drama, yet are equally rooted in what Morton describes as Romanticism’s “polarity between solitary individualism and connectedness—whether to families, clubs, communities, nature or deities.” The sculptural multiples of Katharina Fritsch, reviewed here by Mason Riddle, similarly cycle between communal subjects (fairy tales, religion) and formats (monumental public statues), and the purposefully private (how else to describe a small heart made of teeth?).

Outside of Germany, Jannis Kounellis spent his career lacing intimate emotions to shared artifacts and histories, nowhere more nimbly than in the mixed-media editioned “objects” that are the subject of Nicole Meily’s review. Kelsey Stephenson, whose installation divining was selected by Angela Griffith as the winner of this issue’s Prix de Print, transports this conversation about group identities and subjective experience to the New World, with a shimmering battery of paper sheets that invoke the light and topography of the Canadian Badlands.

If any figure could be cast as a mascot for this issue, pulling its many threads into one lumpy piece of macramé, it would be Segers, the Dutch mystery man recently the subject of groundbreaking exhibitions at the Rijksmuseum and the Met, and of a two-volume catalogue raisonné reviewed here by Brian D. Cohen. The challenges that Jonas Wood faced in moving from the malleable colors of painting to the prickly logistics of print were faced down by Segers four centuries earlier. The eccentric solutions he developed are echoed to some extent in the paint-print hybrids of Richter, and in Polke’s use of reduced contrasts, layering and weird supports that, as in Segers’s prints, make strangers of the familiar. It is easy to see Stanczak’s screenprints on metal foil as cousins to Segers’s experimental etchings on fabric, and to recognize in Stephenson’s immersive installation an experience akin to that of falling headlong into the northerner’s depicted space. If the multiples of Fritsch and Kounellis share no methods or materials with Segers’s prints and paintings, they nonetheless convey a similar eeriness, a sense of the commonplace having taken one step to the left.

Even the most elastic of mascots can only be stretched so far, however. I can think of no convincing link between Segers and Murphy’s reconditioned Alhambra. This is as it should be, and just one of many reasons to take the omnibus instead of an Uber.