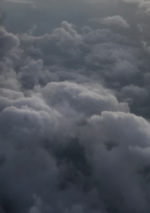 Once upon a time, not so very long ago, “weather” was a byword for the benign and noncontroversial—the conversation selected to steer clear of politics, religion and personal opinion. The topic stuck securely to the self-evident (“nice day”) or at least the dispassionate (“think it’ll be a cold winter?”). Poets and songwriters reached for weather as a handy metaphor (“Ain’t no sunshine when she’s gone”) since its experience was shared by all. That was before federal agencies began telling scientists not to mention global warming in grant applications, before a president stood in the rain and claimed it was sun, before “climate” became a byword for existential risk.

Weather itself, of course, has always harbored threats. Lightening bolts, deluges and droughts were for millennia the gods’ instruments of enforcement—cosmic Tasers and water cannons. The advent of science shifted our perception of weather’s mechanisms, if not of its experience, and in Western visual art weather emerged as a subject independent of gods and often of humans. This issue of Art in Print charts these shifting winds.

The skies that Alexander Cozens (1717–1786) fixed so carefully in his remarkable how-to book A new method of assisting the invention in drawing original compositions of landscape are noteworthy for historical primacy—Cozens was early to the game of meteorological aesthetics—and also compelling in their reduction of the most complex and fleeting of experiences to simple line. With their sequential captions, they form a curious antecedent to Joe McKay’s 1992 artist’s book, One Week in October, in which the artist clothes himself in daily weather forecasts. McCay’s book is discussed here in Nicholas Alguire’s column on artists books.

Blustering rain and the human drama it brings are the subject for both the fin-de-siècle etcher Félix Buhot (1847–1898) and the contemporary artist Aleksandra Mir. In their essay here, Anne Leonard and her students at the University of Chicago track the changing skies that Buhot imposed on his holiday-makers and urban commuters through his use of successive states and animated inking. Meanwhile Mir uses rain as the occasion for an episodic social experiment, offering shelter to strangers and documenting the results in The Big Umbrella (2003), another of the artists’ books examined by Alguire.

The tragedy and terror of contemporary climate change are tackled here in two deceptively decorous bodies of work: Janice Kerbel’s Home Climate Gardens (2003) and Susan Goethel Campbell’s Heatscapes (2012–ongoing). The former, as explained by Catherine Daunt, was created as part of the artist’s residency with the Tyndall Centre for Climate Change Research at the University of East Anglia, and consists of meticulously researched garden plans, delivered with deadpan architectural precision, for the interior microclimates such as laundromats and revolving restaurants. Campbell’s work is similarly the product of—and sometimes a source for—scientific research, while, as Sarah Rose Sharp points out in her essay, remaining disarmingly seductive. Beauty may equal truth here, but the truth is not pretty.

Bringing this weather report into the present—and perhaps future—is Erik Hougen’s project for Art in Art in Print, Sciences, in which weather is considered as both mystery and metaphor.

In other content in this issue, Stephanie Delamaire and Joan Irving consider the legacy of Fanny Palmer (1812–1876), her impact on the American print publishers Currier and Ives, and by extension, on how America came to imagine America. Ruth Fine reviews the retrospective exhibition of Helen Frankenthaler prints at the Art Institute of Chicago.

Finally, this issue’s winner of the Prix de Print, selected by printer and publisher Renée Bott, is Emma Nishimura’s An Archive of Rememory (2016–2018), an ambitious installation project that addresses the Canadian internment of Japanese citizens during World War II to evoke the workings of collective and personal memory.

Like the more recent works on weather, it reminds us that just because we can’t control something doesn’t mean we’re not responsible.