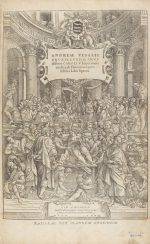 De humanis corporis fabrica libri septem (“on the construction of the human body in seven books”)1 is an early printed anatomical textbook written by Andreas Vesalius (1514–1564). It is both a striking object of visual art and a milestone in the history of anatomy. In its ambitions and innovative physical format, it also represents multiple ways in which the invisible may be pictured.

We each came to this work of Vesalius with different areas of expertise. Adam is an imaging scientist with expertise in the medical and cultural heritage sectors; Tabitha is a rare-books librarian at University College London (UCL). We’ve collaborated on a number of projects, and in this one we shared the intention of revealing more about the physical structure of this remarkable volume.

Even in its earliest iterations (the first edition and the abridged Epitome, both published in 1543) the Vesalius publication was large, spectacularly illustrated and beautifully produced. But the second edition, published in 1555, is still more imposing. Printed with larger type on thicker paper, it contained new textual updates, and at nearly 900 pages, is a large, brash, confident piece of work.2 The initial print run is estimated to have been at least 800, and more than 400 copies are known to have survived to recent times.3 Three of these are held by UCL Special Collections.

For more than a millennium, European anatomy education was based on the teachings of the Greco-Roman physician Galen (129–ca. 216), who had consolidated and added to prior knowledge by carrying out human dissections and animal vivisections. Until Galen, for example, it was believed that the arteries carried air because arteries in dissected dead bodies were empty. It was Galen, who was physician to the gladiators and presumably familiar with injuries, who revealed that the arteries do in fact carry blood.4 Despite such insights, however, Galen remained committed to the erroneous theory of the four humors—one of many misunderstandings that arose from the fact that the internal workings of the living body were largely unseen (and would remain so until the advent of X-rays in the late 19th century).

In the Renaissance, thinking about the body was transformed by the anatomical drawings of Leonardo da Vinci, based on dissections, and Vesalius continued in this tradition. Carrying out his own dissections, he demonstrated inaccuracies in Galen’s theories. Both Leonardo and Vesalius pictured structures that had been invisible physically, lying beneath the surface of the living body, and invisible intellectually, thanks to Galen’s abiding influence.

From its first page, it is clear that the Vesalius volume is as ambitious artistically as it is medically. The complex woodcut frontispiece (Fig. 1) shows the dissection of a woman, surrounded by a packed audience (including a dog, the basis of much of Galen’s anatomy that Vesalius challenged). The choice of a female corpse, rare in an Early Modern anatomical demonstration, is striking for several reasons, not least the angle at which the body is presented to the viewer,5 and it is largely for this image and the 250-plus woodcuts of the dissected human body that follow that the book is best known today. Particularly remarkable is a set of 14 woodcuts showing a male body in progressing stages of dissection. These prints, popularly referred to as the “muscle men” or “flayed men,” have been much studied by art historians, and attributed to various artists, including the school of Titian and Jan van Calcar.6 At once diagram and art, they set gruesome anatomical detail against a background of hills (possibly near Padua) that can be aligned to form a continuous panorama.7

Even within an opened body, certain structures and organs remain hidden by others. Vesalius invented two solutions to this pictorial problem: first by having a series of prints sequentially reveal structures, as with the muscle men, and secondly through a less discussed but more ingenious method—presenting a dissection as a pop-up diagram. 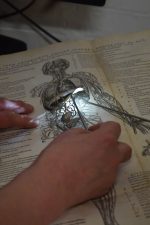 Fig. 3. Imaging underneath the pop-ups using a laparoscope

It was these structural designs that we set out to investigate. Bound in two of UCL’s three copies of the book are two separately printed (“fugitive”) sheets,8 one of which was intended to be removed by the reader and, using the detailed instructions provided, cut up and reassembled by attaching its constituent parts to the other sheet, forming three-dimensional anatomical illustrations (Fig. 2). The reader would thus be able to see clearly how different organs and blood vessels are aligned with respect to each other, and could appreciate their organization as a whole. The third UCL edition9 is a rare example in which these parts have been assembled, transforming the page into a remarkable three-dimensional object.

This sort of paper diagram was not unique. Vesalius’s 1543 Epitome included similar, but not identical, parts for the assembly of three-dimensional paper manikins. Astronomical texts had included moving discs, or volvelles, for several centuries, and the first printed English translation of Euclid’s Elements in 1570 included fold-out diagrams to explain geometry. Printed flap anatomies and similar anatomical diagrams, particularly used to reveal a child in the womb, appeared from the 1530s to the 18th century.10 As Boris Jardine observed, writing of an Elizabethan mathematical book: “one of the more surprising things a wealthy owner of a beautifully illustrated folio volume could do was to take a sharp knife and cut it to pieces.”11

What is unusual is how Vesalius uses the technique. Introducing the 2019 New Editions issue of this journal, Susan Tallman wrote, “most artworks fall into one of two camps: things that are made to say something, and things that are made to figure something out.” In the case of the Vesalius, that “figuring out” is extended to the owner: the image is best understood not as a record of discovery, but as its tool. The book’s early owners expected the act of reading to include physical interaction with the text-bearing object—they annotated, colored, illustrated and cut up their books. Vesalius, rather than simply using paper flaps to reveal hidden parts, exploited reader expectations of interactivity by providing a learning tool with which the reader could systematically locate and hide, rather than reveal, the organs of the body.

Art in this instance facilitates, then obscures, the record of investigation. We wanted to uncover that record. The constructed pop-ups look as though they should be delicate—some nerves and blood vessels are barely a millimeter wide—but they are unexpectedly substantial. They have been strengthened by a barely visible support layer stuck to the underside of the printed image. Vesalius himself suggests this technique in his instructions: “To attach the figures printed on this sheet properly in their places and to make them sturdier, first attach a layer to the back of this sheet and cut out each of the figures from the surrounding paper.”12

Fig. 4. View through the laparoscope, showing the complexity

To find out more about these invisible reinforcements, we looked underneath the flaps, using a fetal laparoscope (a rigid illuminated endoscope with a diameter of about 3 mm, normally used to perform keyhole surgery on fetuses in the womb) (Fig. 3).13 In other words, we took modern medical imaging equipment designed to picture the invisible within the living body, and used it to picture the invisible details of the fabric of a historic book’s pop-up organs.

The resulting images clearly showed hair follicles and fibers, revealing that the material of the supporting structure was parchment. Handwritten Latin in a medieval script was also visible (Fig. 4), suggesting that the pop-ups were assembled when parchment manuscripts were still commonplace and less valued than newer printed books, possibly soon after the volume had been purchased almost 500 years ago. A similar manuscript-fortified, assembled manikin exists in Cambridge University Library’s Vesalius Epitome CCF.46.36. In our example, we were able to identify the reused manuscript as being a discarded medical text.14

By imaging this piece of printed medical art using a laparoscope, we were able to uncover a reader’s (or bookseller’s) process of exploring and naming otherwise invisible territories of the human body, without ourselves damaging the edifice—the fabric—of the paper body. In the process, we acquired a film from the imaging equipment that resembles a work of art itself (see https://doi.org/10.5522/04/8224085.v1).

We are grateful to Dr. Sandy Mosse and Dr. Dzoshkun Shakir of the Wellcome/ EPSRC Centre for Interventional and Surgical Sciences who provided the fetal endoscope and carried out the imaging study, and to UCL Special Collections for making the book available to us. Images of the book courtesy of Special Collections, UCL Library Services.