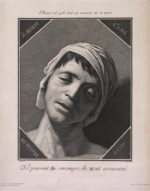 Prints about politics during the French Revolution adopted specific ideological positions in the shifting landscape of the nascent republic. The clarity of their viewpoint, however, relied equally on the image and its text—both the words imbedded in the image and the associated captions. The remove of historical distance is necessarily an impediment for the modern viewer in an interpretation of the nuances in these kinds of prints, though the often rich amount of information in the visual and textual components offers several paths of inquiry. But when the texts of the prints have been modified, replaced or removed by later hands, the new setting imposes different meanings on the images, meanings sometimes at odds with their original message. Three examples in the Harvard Art Museums’ collection highlight the contingencies built into interpreting political prints of this era, and caution against making hasty assumptions about what they say.

The museums’ impression of the well-known engraving by Jacques-Louis Copia from 1794, Jean Paul Marat, has had its inscription changed by a later intervention. Letters were cut from a printed text and pasted over parts of the famous statement inscribed below the image, which can still be read unadulterated in the surviving copper plate for the print: “Unable to corrupt me, they killed me”.1 The added, capitalized letters on Harvard’s impression change the voice of the inscription from the first to the third person so that it reads instead, “Unable to corrupt him, they killed him.”2 The open lips of Marat no longer speak; his martyrdom is now described passively. The edited text partially deflates the force the image carries when the deceased is joined with first-person speech.