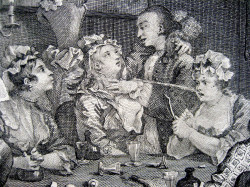 Hogarth’s series of “Modern Moral Subjects”—Harlot’s Progress, Rake’s Progress and Marriage A-la-Mode—have always been admired for their vivid storytelling. As he said himself they were like plays, with each painting or engraving the equivalent of an act in a theatrical performance. The story in each series is told through a mass of detail; responding to the engravings can be a pleasurable process of deciphering the clues to each character and his or her eventual fate. But Hogarth’s literary admirers, who were numerous from his own time, tended to miss the visual nature of so much of his humor. 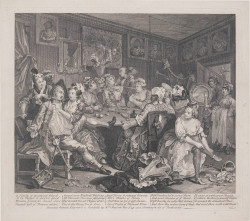 The detail I have chosen comes from a scene in which the Rake, recently come into money, enjoys a dissolute night on the town, ending in a notorious brothel in Drury Lane. He is shown lying back complacently, unaware that one of the prostitutes is filching his wallet.Hogarth captures completely the rowdiness of the scene, full of intimations that the semblance of order is about to be shattered. One of the many witty clues to this is given by a small visual moment. A prostitute left of center seated behind the table, clutching a bottle, deliberately spits a stream of gin in the direction of another prostitute further down the table, who is threatening her with a knife. The jet of spit is a single line that curves gently from the attacker’s mouth, widening out as it nears the target, to hit the latter’s face.

The peculiarly Hogarthian wit lies in the very elegance of the line of spit as it flies between the two women. On the one hand it is a disgusting projectile, on the other hand its graceful curve looks forward to the artist’s idea of the “line of beauty,” which, he argues in his 1753 book The Analysis of Beauty, lies behind the greatest works of antiquity. Only Hogarth could evoke in a single line both a revolting human gesture and an elevated aesthetic principle.