This iteration of the Prix de Print has been judged by Andrew Mockler. 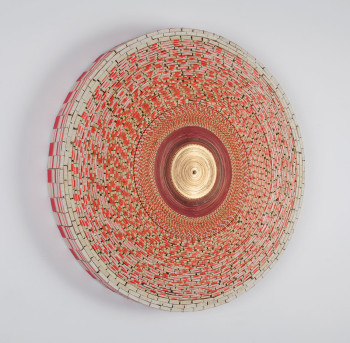 My first impression of Mario Laplante’s Dennison was of myriad small parts coalescing into an organized field, as if the gravitational force of the central mass had pulled all of these moments of color into its orbit. I was reminded of early cosmologies, in which every sphere of existence is depicted in as many concentric circles. Or of a mandala, which, like the discus shape of this print, invites the viewer to contemplate the movement from outer perimeter to inner circle—a meditation on unity. I was able to lose myself in the associations awakened by this print. But I had to ask, how is Dennison a print?

In the information provided by the artist, the work is described as a “monoprint made of corrugated cardboard, digital media on Masa Japanese paper, gilt edges taken from the head, fore edge, and tail of old book pages, and Avery Dennison Red Border gummed labels.” It seems to be a combination of readymade materials and of prints made by the artist himself. When I contacted the artist after making my selection, he told this story:

The title Dennison comes from vintage boxes of Dennison Red Border gummed labels I found in the storage room of an old commercial printshop. The printer was closing shop. He was letting go of most of his inventory, some of which dated from decades ago.1

His account reminded me of James Joyce’s observation in a letter to a friend: “Chance furnishes me with what I need … I’m like a man who stumbles; my foot strikes something, I look down, and there is exactly what I’m in need of.”2 Chance and choice often merge in the making of a work of art, and in Laplante’s case luck may have played a role as well.

The print is closely related to his earlier Palimpsest series, in which he used his own early etchings and lithographs to build a discus. This palimpsest-like reuse of an existing work in a new piece also comes into play in Dennison, but here the raw materials are mass-produced printed matter in addition to the artist’s own prints. It is a hybrid of the machine-made and man-made, each evoking a different kind of memory: the shared memory of material culture and the personal memory of solitary, painstaking creation and construction.

Looking closer at the print, one begins to imagine the time involved in creating it: selecting, cutting, wrapping and assembling. Laplante writes: “I wanted the print to exist in a format beyond the traditional and more toward the sculptural … [a] coming together of printmaking and sculpture.”3 As becomes evident, he uses three-dimensional pieces to create an object of illusionistic space. Turning from the front to the side view of the piece, which projects three inches from the wall, we can see the labels’ red and white surfaces cut into rectangles stacked like bricks. As we move from the outer edge toward the center of the disc, the wrapped bricks become narrower and more numerous, creating tiny pieces of color. In this way, the print reprises a key theme in the vocabulary of printmaking itself—the use of fields of solid marks to create the illusion of gradations of tone. This fluctuation between Dennison‘s illusion of space and the fact of its objectness keeps us looking. Moving inward, the layers of the disc become strips of dots, compacting to form ever-denser tonalities. Finally, at the circle’s center, solid colors materialize: first red, then a flash of gold.