This iteration of the Art in Print Prix de Print has been judged by David Storey.

It’s all about the blue. On the one hand, blue can be regarded as a reliable chromatic surrogate for darkness. It functions as a stand-in for black, available for the artist to call on without surrendering to that graphic absolute. Yet when I first opened the digital image of Oscillation  Shift, a buoyant, ebullient blue floated up off the screen. It was blue infused with light—a blue atmosphere, a blue vista populated with squadrons of blue units energetically bustling about on their blue, blue business. This varied world of blue is not a metaphor for darkness, night skies, distance or negative connotation on any level. It is an arena for ceaseless motion loaded with an implication of generative enterprise. This is almost literally life in a nutshell.

2. A Conversation with the Artist

After I selected Oscillation Shift for the Prix de Print, Art In Print provided the identity of the artist and her contact information so I could ask particular questions. As we talked, Karen Kunc spoke about her determination to work with color in a more focused, thematic way than she had before. In Finland she had learned about a condition of light at the end of a winter’s day that the Finns called the “blue moment.” In this print, instead of comprehensive color relationships between opposing families of hue, Kunc sought a unified color world where incidents of opposition were minor, even peripheral. There are small neighborhoods in this print where blue and red occur together to summon an earthy, brownish violet that never really repudiates its blue roots. There is also a small yet essential constellation of bright yellow circles that radiates intense moments of warmth in the prevailing chill. Kunc’s woodcut talks of nature, but any stereotypical color associations based on nature dissolve into the cool, ambient azure. Organic relationships of interconnectedness and communal enterprise hold sway here, replacing the abstracted intimation of specific organic shape and image that are present in much of her previous work. 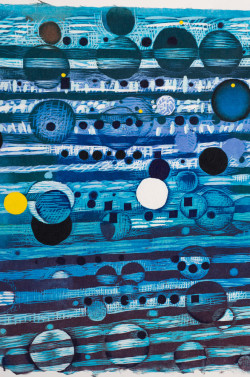 The potential for renewal, continuity and generation is amply implied in the configuration of the image. Irregular, not quite matching horizontal stripes stretch across the whole “bleed” image and interact with the constellation of circles, like plowed fields clumping up with a ripe round crop. Adopt a different sense of scale and the references veer towards the cellular: a teeming microbial population jostling together in a very, very small place. In any reading, the sense of densely crowded action unfolding in place with order and purpose is constant.

Though there appear to be four conjoined segments from left to right, the print is not a composite. It is printed on a single sheet of Japanese paper (a Kozo fiber) and is a reduction print from one woodblock. In a reduction print, an initial cut is made on the block, which is printed in a color, then a second cut is made on the same block, reducing it, and the block is printed in a different color on top of the previous printing; the second layer of ink modifies the first and adds to the development of the image. This process is repeated until the image is complete and the block is essentially all cut away. Opaque inks are often used to build a substantial, multi-leveled image, but in this print most were transparent, allowing all levels of the differing shades of blue to interact and amplify each other. The transparency intensifies the color and creates a disembodied atmosphere of blue. Kunc recalls seven or eight rounds of cutting of the block to complete Oscillation Shift, with one final separate block for the small yellow highlights. With prints, the technical process used always influences the work’s intangible aspect, its soul. In this reduction print, the sequence of extinguishing each stage followed by the regeneration of the next embeds and reenacts the relentless cycling of nature.

A complex introversion coalesces into a geometric configuration of dark—almost black—lines in the third quarter of the image (reading left to right). Branching, mapped-out connections culminate in a strong vertical line supporting a bright circle, poised on the threshold of being a pictographic stick figure. This proto-characterization is in an ideal gravitational position to juggle the “cells” crowding on all sides. The latent identification between this linear figure and the viewer is vague enough to slip away into the mild chaos of the blue field.

5. About the Print II

Oscillation Shift renews itself each time I look at it. The blue is compelling but not overly amiable—it can turn edgy in an instant. The circles reestablish new sets of relationships while you’re looking at them and never come close to settling into a pattern. Kunc understands the territory that is the surface of a print. She can take a sheet of paper and make it live.