This iteration of the Art in Print Prix de Print has been judged by Trevor Winkfield.

Lewis Carroll’s revolutionary children’s book Alice in Wonderland first appeared in 1865. The author had chosen as his illustrator the political cartoonist John Tenniel, and such was Tenniel’s impact on the story that his interpretations quickly became regarded as indispensable. They were perfection—nothing more appropriate could be imagined. They remained sacrosanct until the early 20th century, when Arthur Rackham was bold enough to offer an Edwardian view of the Victorian heroine, quickly followed by a slew of other interpreters, who proved that Alice can have many guises (it is, after all, one of the most visually stimulating of all children’s stories).

For many people the Russian poet Vladimir Mayakovsky is forever associated with the geometric Constructivism/Suprematism of El Lissitsky, who designed and illustrated Mayakovsky’s 1923 collection of declamatory verse, For the Voice. That collection became just as much a classic as Alice in Wonderland, though exceeding that staple by being a complete package: Lissitsky not only provided the striking red and black illustrations but also designed the book as an object, a complete collaboration between poet and painter/designer. It doesn’t contain Mayakovsky’s best poetry—unless Soviet rhetoric is your preferred mode of declamation. Lissitsky picked up on this stridency and visualized the book as a kind of instruction manual, complete with index tabs running down one margin. 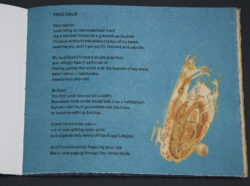 Meanwhile, the lyrical side of Mayakovsky’s versification has received far less attention from artists. Most visual interpretations have been insipid by comparison with Lissitsky’s, but in the past few decades, with the revival of poet and painter collaborations, the picture has brightened considerably. George Kovenchuk’s 1974 version of Mayakovsky’s The Bedbug is a case in point. Another brilliant interpretation of what I think of as his “feminine” side is the present Prix de Print selection, A Cloud in Trousers, the artist this time being Thorsten Dennerline (coupled with Michael Dumanis as expert translator of Mayakovsky’s verse). Modest in size (at 18 x 22.2 cm and 16 pages), it doesn’t require a lectern to read it and can be perused flat on a table or propped up in bed; make sure you’ve washed your hands thoroughly before touching it—this book is in an edition of only 38 copies.

In his statement about this project, Dennerline emphasizes that “rather than just illustrate a book of his I kept the project open-ended, letting it change and evolve, into a portrait of sorts and then began to add layers of detail that reflect a sense of his complexity.” The prime stipulation we can place on a painter-and-poet collaboration is that they know each other’s work inside out, otherwise the painter acts merely as an illustrator, not an interpreter (witness Matisse who, when asked to illustrate James Joyce’s Ulysses in 1935, simply responded—the book not having been read—with irrelevant etchings based on classical Greek themes).1 Mayakovsky had been dead the better part of 80 years by the time Dennerline came to collaborate, and though he was fully aware of—and admired—Mayakovsky’s earlier collaboration with Lissitsky, this in no way inhibited his own approach. In opposition to Lissitsky’s geometric masculinity, Dennerline offers a gentler, more biomorphic invitation to Mayakovsky’s world, a world where, as the poet said, “my sound is something gentle, feminine.” Mayakovsky being who he was, the sounds he trumpeted were passionate.

Nestled between cadmium yellow covers, the 16-page poem is splayed across eight azure-colored spreads; the text is printed in black letterpress with yellow imagery often drifting across two pages and acting as clouds against a dense blue sky. But since poetry acts as a trigger to the imagination and sends the reader off on unexpected trajectories, these clouds could also double as ectoplasmic islands, or constellations—constellations that contain yet more worlds. Layer upon layer of amoeba-like shapes co-exist with other microscopic fragments, often corralled behind folding walls. Some even trespass onto the azure itself, like willful satellites. Or cloud fragments. All of this—clouds, sky, text—create a rich brew that has nothing to do with Soviet Russia and everything to do with the roots of poetry.