This iteration of the Art in Print Prix de Print has been judged by Paul Coldwell. 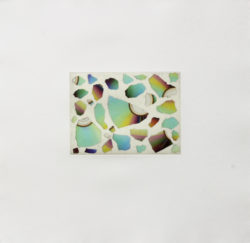 Cooper Holoweski, Fragments of a Broken CD-R—After Piranesi’s Fragments of the Marble Plan of Ancient Rome from Recent Antiquities (2016).

In the series Recent Antiquities (2016), Cooper Holoweski follows the tradition of artists who have taken earlier artworks as starting points for new ones. One immediately thinks of Roy Lichtenstein’s Cathedral lithographs made in 1969, based on Monet’s paintings of the façade of Rouen Cathedral from the 1890s, or David Hockney’s free interpretation of A Rake’s Progress, in which Hogarth’s engravings were transposed from 18th-century London to America in the 1960s.

Holoweski takes as his muse Giovanni Battista Piranesi—specifically eight plates from Piranesi’s Antichità Romane (Antiquities of Rome, 1756), a set of volumes in which the artist combined maps, archeological close-ups and the kind of Roman views for which Piranesi became famous. His Views have often been dismissed as topographical souvenirs for travellers on the Grand Tour, in contrast to his dramatic etchings of imaginary prisons, the Carceri (1745–1761), where staircases seem to lead ever onwards and the unpopulated caverns appear as backdrops for tragic opera. Holoweski, however, is drawn to these more descriptive, more literal works.

While Piranesi’s etchings detail a world of slow change, where monuments erode over centuries into ruins of their former glory, Holoweski’s confront us with evidence of a recent world slipping into premature obsolescence—shuttered “big box” stores, disintegrating McMansions and discarded electronics. He ignores the human elements that Piranesi included to animate and provide scale; his is an uninhabited world, possibly a post-nuclear-apocalypse, with long shadows to add to the sense of desolation. 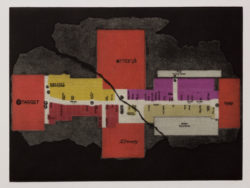 Cooper Holoweski, detail of Plan of the Mall—After Piranesi’s Plan of the Mausoleum of Constantina from Recent Antiquities (2016).

In one striking image, Holoweski presents rainbow-hued shards of a CD-ROM arrayed like fragments of a once precious bowl waiting to be glued back together. All the pieces are there but we know that, while a bowl can be restored to functionality, the disc has forever lost its raison d’être—the transformation of digital data into action or information. The drive is incapable of bridging seams, and the disc will remain mute.

In another print, he transposes Piranesi’s Plan of the Mausoleum of Constantina into the floor plan of a shopping mall. Piranesi presented the image of what appears to be a piece of spolia with the diagram on the surface of a stone fragment cracked diagonally in half, suggesting that even a monument to death itself is subject to decay and eventual ruin. In contrast, Holoweski’s mall—the kind that exists on the edges of towns all over America—has a similar cruciform structure, with department stores taking the place of the ancient mausolea. A monument to the promise of happiness through shopping, isolated by the car park that serves it, the building is marked with the brand names of its subjects and sponsors: Macy’s, JC Penney, Target. Like Piranesi’s, Holweski’s image bears a diagonal fracture, a reminder that all empires eventually fall, even those listed on the NYSE.

The prints are produced through a digital / intaglio / chine collé process: the color is printed by archival inkjet on thin Japanese paper, and the etching is printed in black on top of the digital print and adhered to the support. The resulting quality is reminiscent of hand coloring, but the plate tone takes the edge of the synthetic color and dulls it, again evoking a sense of lost luster. 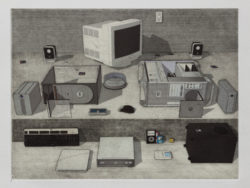 In Two Fragments of Broken Computers—After Piranesi’s Two Fragments of Brick Stamps, the artist lays out digital hardware for inspection. We see the familiar components: the CRT monitor, the open computer housing, the external hard drives, speakers, keyboard, mouse. It’s a still life reminiscent of Wayne Thiebaud with echoes of Giorgio Morandi. All the elements are impassively recorded with precise and careful detachment.

Holoweski’s series suggests a compression of time—a mere two decades as compared to Piranesi’s millennium-long look back. The digital remains he offers us seem dead, inert, useless. Their utopian promise has been reduced to obsolesce. These prints quietly invite the viewer to reflect on our rapidly changing material world and the traces we leave behind.