This iteration of the Art in Print Prix de Print has been judged by Antoine Rouillé d’Orfeuil. 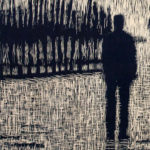 Tracking, by American printmaker Barbara M. Duval, is a large, ambitious woodcut. It shows a group of anony-mous figures walking away from the viewer, toward a luminous focal point in the center of the image. Seen from the back, these figures appear to be male, but are otherwise so indistinguishable they might be clones—perhaps these are a half-dozen different men seen in the same moment, or alternatively one Everyman progressing through time. The lack of detail suggests absence rather than flesh, though two stationary figures in the foreground do cast shadows or reflections on a surface that might be land or water. They look ahead, tracking the others as they proceed toward the horizon.

Duval cuts birch plywood with a regular woodcutting tool, making slim nicks whose intense repetition leaves her figures suspended, hovering on a rever-berating ground. On the ground below the horizon, she crosshatches these cuts, creating a thatched effect that plays on the retina and adds a confusing push and pull within the picture plane.

Despite its sharp contrasts—inked in solid black and printed on thick white Stonehenge paper—the print conveys a blurry atmosphere (as someone interested in the effects of different papers on completed images, I would also be curious about how an impression on a heavy, sensitive Japanese paper might look—would it emphasize this sense of fuzzy uncertainty?).

Duality is central to this print. Apart from the definite direction in which the men walk, everything seems to be interchangeable or reversible: though her cuts are crosshatched for the ground and vertical for the sky, both are treated in a related manner; the row of shadowed trees bending in from the right are echoed by a similar row on the left. What is above could be below; the blacks might be substituted for the whites, likewise absence for presence, positive for negative. Forms and their shadows bleed into one another. The walking men could be anyone.

When I saw it, the image called up from my internal library of pictures Edvard Munch’s Towards the Forest (1897): another large woodcut of figures seen from the back, looking into the woods; two artists depicting woodland with wood blocks. Both prints convey silence and mystery, but in the Munch, the two people are nearly fused into one as they enter the trees together; in Duval’s woodcut, by contrast, the world is a lonely place with no human interaction. The idea than one can be quite alone even when surrounded by other people comes through strongly. Tracking is a striking image of isolation.

One thing is obvious: there is only one direction of movement, inevitable and irreversible. To this viewer it suggested the asymmetrical “arrow of time” posited by Sir Arthur Eddington in The Nature of the Physical World (1928) and later elaborated by Stephen Hawking:

The mysterious atmosphere of Duval’s print can be read on many different levels, and interpreted in many different ways. It raised these thoughts in my mind, but in fact I choose it simply because it is beautiful.