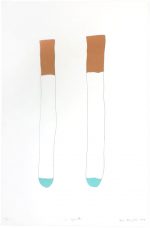 All the works submitted for the Prix de Print were carefully crafted and interesting. Some engaged not only the visual sense, but also the intellect and the emotions—a triple treat. Some furthermore called up contemporary social issues, putting the work into a larger historical context.

Jurors for the Prix de Print are given images and descriptions, but not the artist’s name (although several entries were by printmakers whose work has previously appeared in< Art in Print and might be recognized by regular readers). I chose Mary-Ann Monforton’s deceptively simple lithograph. The delicate colors and thin lines catch the viewer off guard: are the two long vertical forms with a brown band at the top and a rounded blue tip of color at the bottom a pair of knee socks? Or are they more sinister—test tubes suggestive of drug production, perhaps? The title identifies Monforton’s simplified forms as a pair of e-cigarettes—traditional banded tubes of paper-and-tobacco, signaling their status as electronic only by the blue glow at the tip.

Monforton describes herself as a sculptor who draws in preparation for her sculptures. She prefers to create simple objects that reverberate in complex ways. Many of her sculptures have taken the form of simple objects that act as metonyms for human quandaries: a dilapidated football questions the honesty and morality of professional sports; a misshapen 8-ball promises—on no good evidence—good fortune.

She has also created e-cigarette sculptures—small ones made from clay, pencil and paint, and large ones from wire mesh and plaster gauze that lean against the wall like flimsy, loitering logs—or people who have a quick smoke by an office building’s back door. Like those in the print, the sculptures are slightly bent and irregular, communicating a poignancy that throws the viewer off balance, prompting both humor and dread. Working on this lithograph with printer Maurice Sanchez at Derriere L’Etoile Studios, she purposefully emphasized the drawn line that articulates the cigarette’s irregular forms and filter bands.

Since arriving in New York City from Grand Rapids, Michigan, with a BFA in sculpture in 1974, Monforton has enjoyed a varied career: she has been a chorus-line dancer for the reggae/ska band the Copacetics; a jazz music promoter, combining established musicians and punk jazz; and since 1993, associate publisher of BOMB Magazine. She began collecting art in 1981 with works by Kenny Scharf, Keith Haring and Jean-Michel Basquiat.

The death of her mother and a subsequent Ox-Bow residency in Saugatuck, Michigan, prompted her to return to the studio and make art again. When a friend gave her some stone clay, she began playing with it, coiling snakes that evolved into e-cigarettes. When she gave these four-inch objects to friends, they laughed and pretended to smoke—or more accurately, to vape. With these forlorn but somehow charming objects, whether sculpted or drawn, Monforton captures the responses to smoking, both positive and negative. While e-cigarettes may be less lethal than regular smokes (they are too recent for longitudinal studies), their chemical contents are linked to brain damage, heart disease and cancer; they are restricted by the Food and Drug Administration to people 18 and over; and they are not approved as a quit-smoking aid, like medicinal patches or gum. Monforton’s image entices, but it also provokes questions.

Mary-Ann Monforton has a lot to say. Her viewers want her to keep on talking.