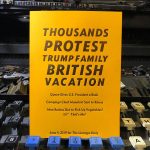 While I could not but be discouraged by the fact that this is the last Prix de Print competition before the demise of our beloved journal, the experience of looking through the 73 submissions dispelled the gloom somewhat. It affirmed that, as Dan Wood put it in a broadsheet he made in response to the news, “ART IN PRINT, NOT DEAD!” (see p. TK). The submissions made it clear that printmaking remains as robust a site for artistic investigation and experimentation as ever. I looked at woodcuts printed from plywood and from walnut blocks, at monoprints, a stone lithograph, mokuhanga (Japanese woodblock printing) with digital photo collage, and a project incorporating etching and site-specific installation. The subjects ranged from traditional landscape to the environmental transformations and political turmoil of the current world. “Turmoil” barely begins to describe it really. Many of the entries—like much, if not most, of the art appearing in galleries now—addressed politics one way or another, but Dan Wood’s The Linotype Daily was especially distinctive. Wood, who won the 25th iteration of this competition exactly two years ago with his letterpress print Emmanuel 9 (2017) (see Art in Print Nov–Dec 2017), is the founder of DWRI Letterpress in Providence, Rhode Island, where he teaches part-time at the Rhode Island School of Design, and produces his own work, including his Linotype Daily project.

In this year-long print project, Wood creates a new print each day, casting single lines of type from brass matrices using two vintage machines: either the 1950 or 1954 Model 31 Mergenthaler Linotype machine (for the small body type) and a 1961 Ludlow Model L Typograph (for the big display type). He then proofs it, prints it in a letterpress edition of 100 copies and posts images of it on Instagram and Twitter. The project is an attempt to record, often in no more than a sentence or phrase, one of the day’s key events. In its modest way it proves, if we need proof, that political art need not feature sturdy striding peasants or posturing dictators, or be stirring and worthy but aesthetically dismal.

The first Linotype machine was invented in the United States by the German-born Ottmar Mergenthaler in the 1880s. Casting complete lines of type from a typewriter-like interface, it revolutionized typesetting, making the production of newspapers and other printed matter speedier and more efficient, and helping to usher in the modern information age. Mergenthaler became known as the “second Gutenberg.” The advent of photographic, and then digital typesetting made them redundant, and now superannuated. (Wood says, “I have been told that having one Linotype machine makes you certifiably crazy, so I don’t know what having two must mean.”) Certainly vintage linotype devices can be unreliable—“MACHINE STUCK,” reads the print for 24 June 2019. Perhaps, however, it was channeling our own dismay. The 24 June text continues:.“Will not allow me to cast VP Mike Pence’s lies about asylum seekers or climate change. It knows!”

Nonetheless they usually enable Wood to deploy archaic printing technology to create broadsheets that address our dystopian political moment with exquisite, potent austerity. Wood’s simple texts speak volumes. In the example shown here, dated 4 June 2019, large capital letters in a chaste sans serif typeface spell out: “THOUSANDS PROTEST TRUMP FAMILY BRITISH VACATION.” But, characteristically, Wood counterpoints the big themes of this headline—the teeming crowds of protestors and the Trump proclivity for diverting public funds to private interests—with softly eloquent observations. One of three subheadlines here states: “Queen Gives U.S. President a Book.” (The book was, many noted, the later, abridged version of Winston Churchill’s definitive four-volume history of World War II.) Possibly imitating the Queen herself, Wood alludes to the president’s apparent near illiteracy and distain for the written word. The following line makes note of one of the several presidential cronies on his way to the slammer. And, as often in this project, the text closes with a mention of the quotidian concerns of the typesetting artist himself: “Man Rushes out to Pick Vegetables! That’s Me!”

In the face of Trump’s Diet Coke kingdom, a toxic political realm of shameless inhumanity and grasping vulgarity, Wood visually and verbally champions the moral primacy of another, quieter, more humane world of routine activities, dodgy old machines, lost keys, considered artistic practice, books, and vegetables (which, as far as we know, the president does not eat).