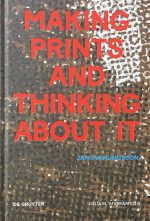 Cover of Jan Svenungsson’s book Making Prints and Thinking About It.

Hard to categorize, this deft book by the Swedish artist Jan Svenungsson should be read by everyone involved with contemporary prints, whether as makers or viewers. In some ways it is a cousin to Jim Dine’s A Printmaker’s Document [see Art in Print Jul–Aug 2013]—both books proceed through project-by-project accounts of successes and failures, and for Svenungsson, as for Dine, printmaking is a collaborative adventure dependent on the creative skills and compatibility of master printers, rather than a one-man-and-his-press saga. But where Dine gives us an episodic fan letter to techniques and printers, Svenungsson walks us through his attempt to figure out what it is—structurally, materially and psychologically—that makes prints matter. The result is a thoughtful, jargon-free inquiry into making and viewing art right now. It is also smart, funny and a pleasure to read.

At a time when critical theory—having failed to produce any measurable change in economics, psychology, politics or the writing of novels—has holed up in art schools as a kind of last redoubt, it is especially important to have this kind of book. For Svenungsson, printmaking “and its particular tensions between original and copy, between handmade and machine-dependent, between the aim for control and the embrace of accident, between analogy and digital . . . is a useful tool for research and progress. There is the aura and there is the democratic aspect, but for most artists, the real value of printmaking is in the making.”

Artists, he argues, are people who like to make things; the various ambitions and constructions of meaning that preoccupy them can be seen as a way “to create sense for a compulsion which, on its own, does not make sense.” This does not make those meanings and ambitions any less important. It is merely a variant on Ernst Gombrich’s maxim that “making comes before matching” or Jared Diamond’s observation that invention is the mother of necessity—where you go is certainly as critical as what got you moving in the first place. And for Svenungsson, “making” is more than just an act of generation, it is also a process of selection—the constant decisions about what gets kept and what gets tossed in terms of marks, materials, strategies or backstories. This give-and-take also distinguishes “making” from “execution”:

A common verb in current English usage about artists and artists’ work is “to execute.” . . . I have found the word both strangely convenient and hugely irritating. To say “the work was executed” implies an understanding that the fundamental act of art making is conceptual, not observational or artisanal. . . . There lingers no trace of hesitation or searching for the right expression when you “execute” a work.

Though Svenungsson observes that “the joy of making precedes the joy of thinking,” most of his own work can be classed as “conceptual,” in the sense that its initiation point is usually a question about how images and ideas work. He is fascinated by incremental deviation and repetition—at what point, Ship-of-Theseus style, does one thing become identified as another? These concerns have motivated great printmakers from Rembrandt to Jasper Johns, and Svenungsson adds to them a 21st-century geopolitical awareness. One recursive body of work, in play now for some 30 years, began with photographs of industrial chimneys, which he recast as eccentrically framed objects, then adapted as actual site-specific brick chimneys, then turned into various print projects, including a prolonged experiment in manual labor in which he spent months handcutting woodblocks for a photo-mechanical, four-color-separation woodcut of a photograph (at one point he grew so bored he forgot to reverse the image left-right). The Bernd and Hilla Becher documentary romance of the original photos is subsumed and transformed through these material artifacts of shifting economies, means and modes of making. (This elliptical series reached an unintended apotheosis when Svenungsson found that the background engraving in Swedish passports now pictures one of these chimney sculptures.)

All these stages, the reasoning behind them and the disappointments and joys they occasioned are described with succinct wit. At the same time, however, every discussion flows out into broader considerations—the nature of translation, for example, or the relative allure of tangible artisanship versus digital disembodiment. (The fact that each has its attractions is treated as a given.)

This attentiveness to multiple levels of meaning extends to the book’s design, which is so graceful it is easy to overlook how clever it is. While the text is broken into sections by project, with the artwork title in bold and a handy march of referential thumbnail images in the margin, the table of contents is organized by other kinds of topics—“collaboration” and “European Union” and “A hint of explosion,” for example. These phrases lie within the chronologically arrayed stories, identified by red type. Without disrupting the reading, this structure acknowledges the constant doubling of logistics and analysis.

In the later part of the book the thumbnails expand to full page reproductions of the works discussed, again with small, exquisite touches. The livre d’artiste Parad (1991) is reproduced in its entirety—rectos, versos, interleaving and covers—and the original book’s gutters are sutured into the new book’s gutters, forming a perfect book-within-a-book. The fact that cover boards are perfectly flush with the page edges is another source of tactile pleasure.

>Reviewing his lack of enthusiasm for one particular finished work, Svenungsson observes: “There is a fine line defining the difference between success and almost success. . . . I do think this print is accomplished and there’s nothing wrong with it—yet it doesn’t achieve that effortless ‘thingness’ which you know when you see it, but still can’t explain exactly in words.”

He may not be able to explain it all exactly, but he surely comes close.