Talk to most MFA students these days and chances are they will express a desire to move to Brooklyn. Despite rising costs for housing, the borough still attracts the sort of young, hip crowd that decades ago might have gravitated to the sketchier neighborhoods of Manhattan—now priced out of reach entirely. In Brooklyn today there remain industrial spaces that attract not only artists looking for studios but printmakers eager to establish communities in which to share resources and ideas. Over the past 20 years or so, they have founded dozens of workshops, mainly in the western and northern sections of the borough, in ex-warehouse spaces along the East River and the Gowanus Canal as well as the interior of Williamsburg and Bushwick bordering Queens.

A few of these workshops have relocated from earlier homes in Manhattan (Jungle Press, Purgatory Pie Press, Dieu Donné . . . ), but most of them began and remain in Brooklyn, sometimes moving from place to place, and acquiring presses and other equipment along the way. Brad Ewing, for example, was given boxes of lead type by Leslie Miller (Grenfell Press) in Manhattan, which formed the basis for Marginal Editions (now expanded from letterpress and woodcut to screenprint). “People will give you stuff if you’re willing to show up,” says artist Rob Swainston of Prints of Darkness in a video posted to the IPCNY website. Calling “some friends who got a bunch of trucks,” Swainston “rescued a litho shop in Chinatown” whose owner had passed away, moving its equipment to his loft in Williamsburg. Prints of Darkness now resides in Long Island City in Queens—“Brooklyn adjacent,” as it were—and has produced editions by, among others, Charline von Heyl and Dana Schutz.

I suppose there is some irony that the high spirited “Pulled in Brooklyn,” curated by Roberta Waddell and Samantha Rippner, was mounted not in Brooklyn but in Manhattan, at the IPCNY in Chelsea, which temporarily expanded to a large space next door to accommodate 164 works by 101 artists. Waddell and Rippner visited nearly 30 printmaking studios in Brooklyn, and their excellent selection, covering all print media and formats, revealed a scene of impressive scale and variety. The exhibition’s slim catalogue should prove useful for years, with summaries of material facts about each of the shops, a map, and background information about the founders. The last helps give a sense of lineage, conveying the ongoing vitality of printmaking in the U.S. Often young and refreshingly open, not hoarding secrets but sharing materials and know-how, the Brooklynites have even founded a club they dubbed “Printmakers Anonymous” that meets irregularly at various shops and occasionally mounts field trips. This community’s goal of accessibility is manifest in the affordable editions produced at Cannonball and Kayrock presses, the latter of which produced a benefit portfolio for the show.

The screenprint wizard Luther Davis served as a consultant to Waddell and Rippner, and figures repeatedly throughout the exhibition. Formerly master printer at Axelle Editions, Davis also spent a decade codirecting the publisher Forth Editions with the artist Glen Baldridge, and seems to know everyone. (His influence is cited by many young printers in the videos produced for the show, which include footage of shops, interviews with proprietors, and panels of artists and printers; one, titled “Build Your Own Printshop,” is a must-see for the aspiring.) Davis is now director of the newly formed Powerhouse Arts Printshop (formerly BRT Printshop), set to open next year in Gowanus headquarters designed by the Swiss architects Herzog & de Meuron, part of a phalanx of facilities for artists working in craft-based practices—or in the current nomenclature, “makers.” Davis’s own handiwork was evident in some 18 works by, among others, Mel Bochner (a jittery screenprint and black-enamel word piece from 2018 aptly titled Crazy (with Background Noise), published by Two Palms Press, and Baldridge (two prints from the spooky scratch-off screenprint series Lucky Sevens [2008] with images appropriated from ads for coffins). Davis also contributed an essay to the catalogue.

Most of the works on view dated to the past decade. The exceptions might be familiar to those who follow contemporary prints: a 1996 book by Lesley Dill illustrating poems by Emily Dickinson, printed at Peter Kruty Editions; 1998 etchings with spindly characters by Nicola Tyson, from Jennifer Melby; a 1992 colored woodcut by Sol LeWitt pulled by his printer of choice, Jo Watanabe, a Brooklyn pioneer who has since retired to his native Japan. Watanabe, Janis Stemmermann of Russell Janis, and Robbin Ami Silverberg of Dobbin Books were among the first to open in Brooklyn, in the late 1980s. While the majority of works were single-sheet prints, there was some adventurous bookmaking on view in cases, including an elegant laser-cut book with abstract imagery by Dan Walsh, printed at Keigo Prints by Keigo Takahashi, who apprenticed with Watanabe; and, from Small Editions, Bikini Girls (2018) by Isabelle Schipper, a risograph book with removable parts that allow the stylized nude within to strip, literally.

Installation shot of “Pulled in Brooklyn,” at IPCNY.

Among the less expected objects on view were Andy Yoder’s Poison Ivy Chair (2018), upholstered in linocut-printed fabric with the menacing plant in rash-red on white (produced by Janice Stemmermann at Russell Janis), and the impressive matrix for Jackie Saccoccio’s Untitled (2017)—a copper plate whose deep etch shows up in the gorgeous black-and-white print as a pebbled abstract surface (printed by Jennifer Melby). 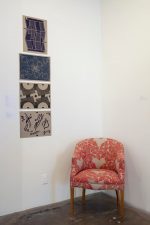 Melby, who opened her printshop in Manhattan in 1980 and moved to the Cobble Hill neighborhood of Brooklyn in 1995, was represented by some 29 prints, dating from the late 1990s to 2018, with vibrant color aquatints by such artists as Tom Burckhardt, Joanne Greenbaum and Andy Spence. In addition to Davis and Melby, Marina Ancona’s Ten Grand Press, founded in 1999 and presently located in Crown Heights and Santa Fe, NM, was a strong presence. Once specializing in monotype, Ancona is now multipurpose, and brings to her workshop a mainly female stable: works by Carrie Moyer, Nicola López, Angela Dufresne and Nicole Eisenman were among some two dozen examples in the show. Ancona is distinctive for allowing artists to create unique variations, though that side of production was difficult to foreground in a group show of this size. Particularly impressive were Eisenman’s prints in various media, including her 2018 Picabia Filter suite layers of? photo-based intaglio and drypoint in images riffing on Picabia’s late portraits. Eisenman also worked with Andrew Mockler at Jungle Press Editions, which contributed a dozen prints, all striking, including large woodcuts by Jacqueline Humphreys (2013), a diaphanous, abstract color lithograph by Melissa Meyer (2018), and three eye-popping, op-inspired black-and-white woodcut and litho combinations by Katia Santibañez (2017).

Though it is tempting to condense large group shows into a “best of” list, it would be especially unfair in this context—the sheer diversity of production makes generalizing difficult. “Pulled in Brooklyn” argues that if there is one locality where the erstwhile “U.S. Print Renaissance” is experiencing a resurgence, it is here. The curators characterize a love of collective problem solving as the essence of collaborative printmaking, and demonstrate how this impulse suffuses an entire community and is energizing a generation.