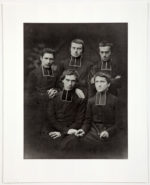 Hung close to the ground, its crystals just barely touching the floor, a two-tier 19th-century chandelier was one of the first objects visitors encountered in the Solomon R. Guggenheim’s recent Danh Vo retrospective, curated by Katherine Brinson. The grounded chandelier, titled 08:03, 28.05 (2009), was one of three in the exhibition; 16:32, 26.05 (2009) was placed upright in a shipping crate and 08:43, 26.05 (2009) was shown in fragments on the floor. Beyond their value as ornamental light-emitting décor, these chandeliers, as their object labels conveyed, are also historical objects: they had graced the Hôtel Majestic during the signing of the 1973 Paris Peace Accords that ended the Vietnam War. For Vo, a member of the Vietnamese diaspora that followed (born in Vietnam, he grew up in Denmark), such artifacts are reminders of complex geopolitical forces as well as of the myriad private desires and personal accommodations out of which geopolitics and individual identity arise.

The titles of the chandeliers mark the time and date of their detachment, under Vo’s instructions, from the hotel’s ceiling—the moment when, in a sense, they were reborn as “art.” Most of the works at the Guggenheim had this dual identity of art and artifact: specific objects with specific histories whose meanings are inextricably tied to what and where they once were. The exceptions are the 11 photogravures that were scattered throughout the show, which reproduce rather than represent their subjects, and in a manner that calls attention to itself, raising further questions about identity in both psychological and epistemic ways.