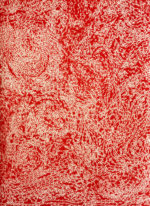 As a painter, David Huffman is known for mixing nostalgic sci-fi motifs (astronauts, UFOs, rocket ships) with everyday bits of racially inflected American life (brown faces beneath the space helmets, churches, police cars flashing their lights). The basketball—spherical signifier of race and nationhood that it is—features regularly in his work as both a subject and a device: he has made pyramids of basketballs as installations, included them in his spacey narrative paintings, and employed them like confetti in brightly colored abstractions.

Huffman’s three recent etchings with Paulson Fontaine Press initially present themselves as all-over abstractions built from bright color and interweaving skeins of white line. Collards, with its wet green and sense of unfathomable depths, evokes kelp forests and intergalactic gas clouds as much as it does the foodstuffs suggested by the title. The swirling red and white of Somatic might be a mapping of ocean currents or interstellar gravitational fields. The white lines in Rainbow, tangled in the center, pull apart at the top into a knot-work network.

It’s easy to fall into the entrancing pattern and flow of these images, so it takes a moment to sort out just why those patterns feel so familiar. Once the penny drops, however, it is obvious that each of these is a printed record of basketball nets or, in the case of Somatic, the chains that replace white rope on outdoor public hoops. Huffman arranged cut-up nets and chains on the copper plates, and aquatint was applied around them.

One of the claims made on behalf of abstraction in the 20th century was that it offered a nonreferential, non-culturally-specific universal language—an Esperanto of the eye. When that utopian view collapsed, pop artists began appropriating culturally specific artifacts into painting and sculpture and prints, acknowledging the power and meaning of the local. Finally we lurched into so-called identity art, with artists examining and reporting on their own particular corners of social space.

Layering these positions, Huffman’s prints are more generous and inclusive than any of them. As abstract images they are compelling and engaging; as indexes of pop artifacts they are witty and charming; and as reminders of the reality that, across America, basketball hoops are stripped from public parks to “reduce crime” by discouraging visits from black teenagers, they tell us that culture is never clean.