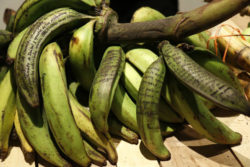 The San Juan Poly/Graphic Triennial, which recently enjoyed its fourth iteration, was established in 2004 as a conceptual reimagining of the previous San Juan Biennial of Latin American and Caribbean Printmaking, which ran from 1970 to 2002. The first Triennial, curated by Mari Carmen Ramírez, professed to place printmaking within the expanded and hybrid field of contemporary art, and defined the medium not by the technical expertise wielded by its practitioners but by the creation of meaning through the imprint—whatever the material or process involved. Ramírez emphasized that this shift was a response to changes in artistic practice: many artists employing print in the 21st century do not see themselves as “printmakers” but as multimedia artists who strategically employ a variety of techniques.1 By grounding its rubric in the transfer of imagery, the Triennial has sought to create a space reflective of trends in contemporary art at large.

The theme of the recent Triennial, “Displaced Images/Images in Space,” considered the transference of imagery and ideas from one location to another and from two dimensions to three. Curators Gerardo Mosquera, Vanessa Hernández Gracia and Alexia Tala selected 55 artists from Latin America and the Caribbean whose work encompasses sculpture, installation, drawing, photography and intermedia.2 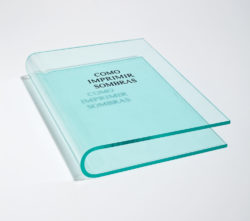 In the Triennial’s main exhibition space, the Antiguo Arsenal de la Marina Española in Old San Juan, Brazilian artist Waltercio Caldas set the tone with Cómo imprimir sombras (How to Print Shadows, 2012), which uses light as the transfer medium between two layers of folded transparent plastic, which form both the matrix and the receptor surface. The transparent acrylic sheet is folded in the shape of a book cover, and the words of the title are “printed” on the lower surface as shadows cast by the engraved letters on the upper plane. The inclusion of Caldas’s work demonstrates the exhibition’s broadened purview through the very domain—sculpture—for which Rosalind Krauss first articulated her notion of the “expanded field.”3

In Remanentes (Remnants, 2011), Puerto Rican multimedia artist Karlo Andrei Ibarra invokes the more visceral connection between printmaking and tattooing, a mark-marking process that also leaves an enduring ink trace (albeit without a fixed matrix). Ibarra’s installation consisted of piles of decaying plantain skins that the artist had tattooed with phrases from the North American Free Trade Agreement (NAFTA). Ibarra’s multisensory environment, inflected by smell and insects, joins the permanence and authority of print to the unstable afterlife of organic matter, citing economic policy in the body of a “banana republic.”

Teresa Margolles, of the Mexican collective SEMEFO (Servicio Médico Forense/Forensic Medical Service), took on the corruption of the Mexican government in the 1990s in Dermis (1996), a set of three hospital bed sheets that bear the imprints of victims of violence. The sheets were removed from ill-run state coroners’ offices and stand as evidence of the lack of conscientious oversight of these facilities. As indices of human bodies, the stains offer a poetic indication of a departed entity at the same time that knowledge of the brutal sources of the stains provokes shock, exerting a commanding presence within the Arsenal’s central space. 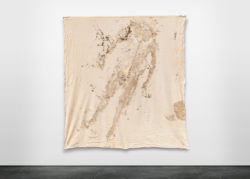 Beyond the Arsenal the Triennial spread across the island of Puerto Rico, inhabiting for the first time spaces outside Old San Juan, including museums in Caguas, Santurce and Ponce. It also incorporated public installations, such as the 22 life-size woodcut portraits by Grabadores por Grabadores (Printmakers for Printmakers), a collective of young students and graduates of the Puerto Rico Escuela de Artes Plásticas. Pasted in clusters on public buildings—a derelict façade adorned with a Puerto Rican flag; a striking pink wall on the side of the Liga de Arte—the prints depicted art world figures such as Andy Warhol, Liliana Porter and the Puerto Rican painter/printmaker Myrna Báez in graphic grayscale, often posing casually with the tools of their craft. This homage grounds the experimentation of the Triennial in art history—Mosquera takes care to note that the Triennial acknowledges its roots and continues to make a place for “traditional” printmaking.4

A project with large curatorial aspirations, the 4th Triennial remains indebted to Ramírez’s theoretical framework for the contemporary print, especially her focus on image transfer and imprint. The exhibition’s new geographical spread and strong selection of innovative work made a fresh contribution to an already rich history of curatorial experimentation.