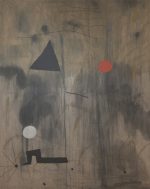 In Joan Miró’s large canvas The Birth of the World (1925), a handful of solid shapes gambol against a dun background—a red circle trailing a yellow line suggests an escaped balloon, a black triangle dangles amid loose framework, a stepped polygon rests below like an anchor. The painting lent its name to a recent exhibition at MoMA that positioned the dreamlike composition as, in Miró’s words, “a sort of genesis” for the artist’s signature style, spawning a visual language that would spill across his paintings, prints and livres d’artistes for decades to come. Curated by Anne Umland, the exhibition followed Miró’s embrace of an abstract, surrealist mode of representation. Among other key works from the 1920s to the early 1950s were prints from the artist’s Black and Red Series (1938), Barcelona Series (1944) and examples of his book illustrations.

The first gallery showed Miró’s turn toward abstraction. Two early still lifes, The Table (1920–21) and Glove and Newspaper (1921), rather tamely attempt to incorporate well-trodden technical developments of modernism, rendering objects naturalistically but within a fractured space. In The Hunter (1923–24), however, we see him abandon such naturalism and half-hearted recapitulations of other modernists. Line and form take on a life beyond mimesis as simple geometrics and curvy lines replace figuration; the hunter’s head is a triangle, his arms an undulating black stroke; whiskery lines suggest a rabbit, a narrow cone the barrel of a gun. The Birth of the World, which hung in the corner of the gallery, liberates shape and line further, offering no clear reference to people, animals or things. It reads like the formal announcement of Miró’s new pictorial language.

The remainder of the exhibition showed how this new language unfolded over the course of three decades. A long vitrine of livres d’artistes attested to Miró’s fascination with print techniques—etching, drypoint, pochoir and lithography—and to his involvement with the surrealist literary milieu of interwar France. An intimate relationship between words and images is visible in works such as a pochoir that accompanied Lise Hirtz’s Il était une petite pie (Once There Was a Little Magpie) (1927–28): a wandering elliptical line loosely outlines a floating mouse and a bird whose head doubles as the nib of an ink pen, which seems to have written the word mort (death) above. The word echoes the startling end of the poem on the facing page, about a depressive magpie who goes out riding on a mouse, returns ill, and dies in her bed. Dada influences were visible in Miró’s prints for Tristan Tzara’s Le Désespéranto from l’Antitête (The Anti-Head) (1947–49). The four illustrations that were on display combine pochoir, drypoint and etching, and employ the same basic shapes in different arrangements: circles, zigzags, triangles, stars and scribbles.

Miró’s Black and Red Series (1938) begins with two single-plate etchings, inked in black: a vertical one scattered with swirling line segments and biomorphic blobs, and a horizontal one featuring similar forms alongside abstracted figures whose body language ranges from totally obscured ambiguity to a terrified, hair-raising scream. The other six prints in the series were made by rotating and superposing the first two plates, and inking them in different permutations of black and red. Each recombination offers new dynamic interactions.

The 50 lithographs of the Barcelona Series (1944) offers a similar farrago of form and figure, adrift in a flattened picture plane. But the clutter in these smudgy prints is mostly contained within the figures. Less abstract than The Birth of the World, these print series bring his geometric motifs in contact with a type of figuration legible in Miró’s nonnaturalistic world.

While the exhibition’s minimal wall texts allowed ample space for viewing, they did little to convey to viewers the context in which Miró was working. His relationships with Dada and Surrealist artists in Paris, for example, as well as with the writers whose works he so deftly visualized are visible in the works but were left unexplained to those lacking prior knowledge. This spare presentation, however, had the benefit of encouraging careful looking, through which the viewer could internalize Miró’s idiosyncratic visual vocabulary as it developed. The occasion to view such a wealth of treasures from the museum’s extraordinary book and print collections should never be squandered.