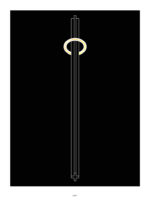 The Museum of Contemporary Art’s exhibition of prints and sculpture by Ania Jaworska was the first in its ongoing series on artists working in Chicago to feature an architect, and the first solo show for Jaworska. Curated by Grace Deveney, it addressed the relationship between graphic and built spaces; design and construction; history and practice through a site-specific installation of sculptures, Cynic Architectures (2012–2015) and a portfolio of 17 screenprints, A Subjective Catalog of Columns (2015), that offers an abridged, quirky history of modern architecture through one of its most salient features.

Conceptually related in their critique of form and function, the two bodies of work occupied separate spaces. The five black sculptures, arranged in a small gallery with black walls and carpet, suggested familiar objects and devices for directing the human passage through space. The curved steel arch of Gated Area (2015) led into a small, circular space fenced by a low steel railing; one could easily enter the circle by stepping over the railing, but the work highlighted ingrained human habit: most visitors chose to enter and exit through the archway. While Gated Area beckoned us in, the circled stanchions of Untitled (Empty Gesture, 2015) impeded access, restricting visitors from nothing but empty space. Other sculptures employed words in mind/object games: three rectilinear columns, strategically barred and dotted, contrived to spell an elongated “HI,” and another column was topped with a slowly rotating “HERE” sign, tweaking the mute architectonic minimalism of Robert Morris, whose gray columnar sculptures are meant to call attention to their presence as forms that transform our interaction with the surrounding space.