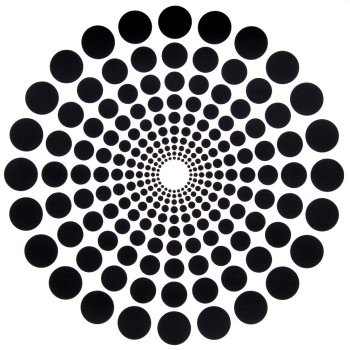 John Cage once wrote that the reason to compose music (and by extension, make art) was not “to bring order out of chaos nor to suggest improvements in creation, but simply [as] a way of waking up to the very life we’re living, which is so excellent once one…lets it act of its own accord.”1

This may seem a peculiar quote to bring up with regard to John Armleder’s new screenprint, a large and sublimely tidy vortex of black dots arranged in concentric rings of diminishing size. No aleatoric event has been allowed to disrupt the pictorial scheme. Everything is perfect: the matte ink sucks in light, the pristine paper sends it blazing back, and the edge between the two is razor sharp. The fact that Armleder is Swiss allows the cliché to write itself.

But in this print—as in his entire career—Armleder is playing with something far wilder than the visual architecture of modernist design or even the endgames of appropriation that have recycled that architecture for the past three decades. Armleder’s roots lie in Fluxus and the fundamental Cagean question of what relevance (if any) the intentions of the artist have to the experience of the audience. Armleder’s oeuvre is charismatically eclectic: in addition to making reasonably conventional art objects (paintings, prints, etc.) he has acted as a curator, critic, performance artist and publisher. All of these activities can be seen, like the closing and opening of the keyboard lid in Cage’s seminal 4’33” (1952), as frames for attention—devices that prompt us to look, not to tell us what we see.

Beyond the ellipse between title and image, there is nothing mysterious about Ancient Imperial Horses—it carries no hint of personal expression or social critique. There is no message to be deciphered. The system is self-evident, but it is also mesmerizing (one can image Mesmer employing it). The eye is entranced, pulled dot by dot into the distance that isn’t a distance, where we find nothing but what we brought with us in the first place: the very life we’re living.