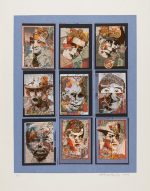 This exhibition is the first to survey the career of the master printer Kip Gresham, who has been a critical figure in British art for four decades. After co-founding Manchester Print Workshop in 1975, Gresham set up Chilford Hall Press in 1982, Gresham Studio in 1994, and now runs the Print Studio in Cambridge. As both a printer and publisher, he has been remarkably prolific: the 61 works on view represent less than 3 percent of the more than 2,500 prints he has produced with artists.

The selection by curator Prerona Presad constitutes both a celebration of print and a concise historical survey of late 20th- and early 21st-century art in the UK. While American artists are present—Claes Oldenburg, Betye Saar and Kiki Smith, among others—this is a largely British show. It begins with Gresham’s own screenprints Paper (1972) and Jigsaw Action Replay (1973), and moves on to works by eminent British abstractionists (Gillian Ayres, Prunella Clough, Terry Frost), Pop artists (Peter Blake, Eduardo Paolozzi, Joe Tilson), figurative painters (Paula Rego, Elisabeth Frink), and an intriguingly large number of sculptors (Anthony Gormley, Richard Long, Cornelia Parker). Some 21 Royal Academicians are present, alongside a healthy smattering of knights, dames, OBEs and CBEs.