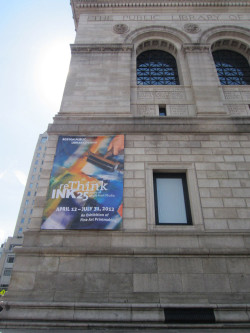 At the Boylston Street entrance to the Central Library in Copley Square, high on a wall, clings Ilana Manolson’s Terra Flow (2012), an aggregate of the themes running through the Boston Public Library’s current exhibition, “ReThink INK: 25 Years at Mixit Print Studio.” Roots collected in the artist’s neighborhood and Arnold Arboretum link islands of plaster painted with maps from the BPL’s Norman B. Levanthal Map Center. The maps might be seen as referencing the resources available to area residents via the public library system, while the slim but strong tendrils symbolically tie together communities.

“ReThink INK” celebrates the work of Mixit Print Studio and the artists who have worked there over the 25 years since its founding in the former Mixit soap factory in Somerville, Massachusetts. The exhibition also demonstrates the dedication of the Boston Public Library to the work of area printmakers, which have been collected in earnest there since the 1940s. “ReThink INK” is, in a sense, a pendant to the 2001 exhibition and catalogue, Proof in Print: A Community of Printmaking Studios by Sinclair Hitchings, featuring work from the 1980-84 Cambridge based Artist’s Proof Cooperative, out of which grew Mixit, Hand Press Workshop in Somerville, as well as Artist Proof Studio in Johannesburg, South Africa.

This substantial show is comprised of 150 works from four different categories, which are mostly intermingled throughout three distinct spaces. The ReThink INK Portfolio is a set of 66 prints produced as a collaborative project for this exhibition. Karen Shafts, Assistant Keeper of Prints, made a selection of prints made at Mixit Print Studio now in the BPL’s collection, including some from the Artist’s Proof Archival Portfolio 1 and the Mixit Print Studio Portfolio, both published in 2001. Ms. Shafts also juried a selection of prints from those submitted by artists who have worked at Mixit. Finally, a small, but innovative group of installation works enliven the Johnson Lobby and the Changing Exhibits Gallery.

Very recent Mixit prints from the ReThink INK Portfolio are hung salon-style in the center of the Changing Exhibits Gallery. The grouping demonstrates the range of intaglio and relief techniques utilized at the printshop, from woodcut, etching, and engraving, to collagraphy, embossing, and photopolymer prints. There is No Map, a 2011 multi-plate intaglio with monotype by Mixit co-founder Jane Goldman, layers mandala-like imagery with a suggestion of seeking. Indeed, maps form a theme that recurs throughout the exhibition and includes Manolson’s contribution to the portfolio, Putting Down Routes, in which the light, regularized lines of a street map are overlaid with darker, less predictable ones printed from inked roots.

Ted Ollier’s 2012 25 Permutations of 25, a relief-rolled laser-cut aluminum plate from a computer generated image, combines new and old technologies to create an image that plays with geometry and variation, and amusingly calls to mind the timetrapped screens of 1980s video games. In Migrant Housing (2011), Mongezi Ncapheyi eloquently condenses architecture to a series of etched and aquatinted signs, which, he explains, refer to compound houses initially designed for mine workers and later used by the party opposing the newly formed government in South Africa in the early 1990s.

Sarah Shallbetter’s 2011 collagraph, Brooklyn, NY, echoes the compositions of Pierre Bonnard with its silhouetted figure in a contemporary urban landscape. Marcia Lloyd intuited the mystery evoked by her 2011 Traces, an etching with photopolymer plate made using cornsilk. In Sequence 2, a woodcut monoprint from 2012, Peggy Badenhousen created an atmospheric print with calligraphic inklings, through a process of drawing on a plate with solvent and oil stick and building the images in layers of passes through the press.

Randy Garber, a partner in Mixit Print Studio since 2010, contributed To My Surprise (2011) to the ReThink INK Portfolio, an offset relief roll of player piano rolls combined with three intaglio plates and relief monoprint. This complex and intriguing triptych incorporates found and developed imagery with language, another theme that runs through the exhibition. Garber’s Reap What You Sow (2008), an image of physical toil, on view upstairs in the Wiggin Gallery, is complicated by numerical symbols requiring interpretation and the phrase, “What you already know,” translated into Greek, Hebrew, German, and other languages. Work, as both a topical and timeless subject, suggests universality here, while the variety of languages implies individuality of experience. 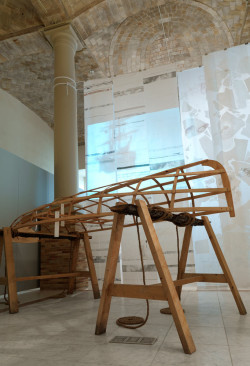 As is clear from the techniques described so far, innovation and flexibility are a mark of Mixit Studio. Julia Talcott created Onward and Upward (2010) by cutting up linoleum cuts and collaging the pieces together, somehow resulting in both a purity of compositional form and a suggestion of the looping chaos of her original subject, a roller coaster. Thaddeus Beal made the infinitely spiraling Compressed Crawling (2001) by burning the image into a type of plastic with a plumber’s torch to form his matrix.

The baker’s dozen of installations in “ReThink INK” push the limits of the definition of printmaking, as so many inventive print artists have been wont to do in recent years. Mary Sherwood Brock creates a wall installation of prints of human hands, eyes, and mouths framed under glass plates of various shapes, sizes, and colors. These anatomical renditions would certainly disrupt the rhythm of mealtime.

Catherine Kernan, one of the two founding partners of Mixit Print Studio, and master woodworker Devereux Kernan collaborated on folding screens featuring woodcut monoprints. Trance, installed in the Johnson Lobby below Manolson’s Terra Flow, features vignettes of flame-like trees, in which the patterns of light through foliage are reversed, so that bare branches and trunks appear to glow. The wood used to frame these images and create the screen enhances the woodcuts by calling our attention to the texture of the material used in multiple ways in this object.

In various pieces scattered throughout the exhibition, Heddi Vaughan Siebel explores the failed Zeigler Polar Expedition of 1903, of which her grandfather was a part. In Far, and Further (2012), an installation featuring monoprints, film, and sculpture, Siebel seems to incorporate references to the library, as have other artists in the exhibition. She invites visitors to inscribe columns of paper, shaped like bookmarks, with their dreams, and then tie them to the skeleton of an overturned boat. This is perhaps an evocation of the fragile nature of hope, as well as a reference to tying strips of cloth to trees in spots of spiritual significance in certain parts of the world.

Thaddeus Beal’s Open Up (2012) is hung high in the Changing Exhibits Gallery, drawing the eye up to gaze at the vaulted ceiling. Its abstracted forms echo the patterns of the tiles above and point to the sense that this exhibition, describing a quarter century of work at Mixit Print Studio, is very much entwined with the longtime support of the local printmaking scene by the Boston Public Library.