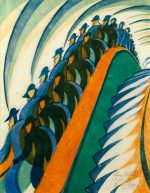 Remarkably, “Cutting Edge” is the first major museum exhibition of work by artists from the Grosvenor School to be held in Britain. Presented in the distinguished setting of London’s Dulwich Picture Gallery and curated by Gordon Samuel, it comes 90 years after Claude Flight organized the “First Exhibition of British Linocuts” at the Redfern Gallery in London. That 1929 exhibition showcased Flight’s own linoleum block prints alongside those of Sybil Andrews, Cyril Power and others who benefited from his tutelage at the Grosvenor School of Modern Art (1925–1940). Championing the humble linocut as a democratic medium, Flight and his small band of followers became renowned for their vibrant, colorful and modestly sized designs, which drew on Futurism, Vorticism and Cubism to depict the energy and speed of modernity in Britain and beyond.

The Grosvenor School artists fell from fashion during the postwar years and it was not until the mid-1970s, when the London dealer Michael Parkin spearheaded a revival of their prints, that the movement’s significant contribution to modern printmaking began to be recognized. Yet until now the most important exhibitions have occurred beyond British shores: “Grosvenor School: British Linocuts Between the Wars” (RISD Museum, 1988); “Claude Flight and His Followers” (Australian National Gallery, 1992); and, more recently, “Rhythms of Modern Life: British Prints 1914–1939” (Boston MFA and Metropolitan Museum, 2008). Ostensibly taking his cue from the latter, Samuel has organized the 120 prints, drawings and posters in this long overdue survey into six thematic sections. Indeed, at times “Cutting Edge” closely resembles the Boston show, with similarly titled rooms focusing on sport, labor, entertainment and urban life. Where the exhibition departs, however, is in the welcome inclusion of rarely seen works by Flight’s Australian students Dorrit Black, Ethel Spowers and Eveline Syme. The result is a thoroughly compelling show that demonstrates the extraordinary versatility of linocut while providing fascinating insights into life and culture during the interwar period. 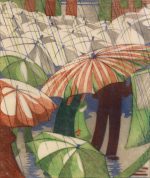 Surprisingly, in an exhibition celebrating linocut, several different mediums are represented in the first room. Here, a cluster of British avant-garde prints demonstrates the artistic influences assimilated by Flight and his followers. Several works relate to World War I, such as Paul Nash’s bleak, Vorticist-inflected lithograph Void of War (1918), showing the devastated landscape of the Western Front. Nearby, a platoon of French soldiers marches in a flurry of fragmented limbs and weaponry in C.R.W. Nevinson’s Futurist-inspired drypoint Returning to the Trenches (1916). Dominating the room is Edward McKnight Kauffer’s color lithograph Soaring to Success! Daily Herald—the Early Bird (1918–19), a huge poster advertising that newspaper. The striking black, white and yellow design is adapted from the artist’s earlier woodcut Flight (1917), a geometric representation of soaring birds that hangs adjacent.

Echoes of these works permeate the Grosvenor School prints, including the first selection, which reflects Flight’s belief in linocut as the ideal vehicle for interpreting modern city life. Among these genteel urban scenes is William Greengrass’s quintessentially English Tea Under Umbrellas (1934), featuring tea drinkers relaxing in the sun. A similar scene appears in Parisian Cafe (1939) by Swiss artist Lill Tschudi. Rendered with a limited palette of red and black, the bold print shows figures reading newspapers and supping drinks; despite being produced as World War II loomed, it offers no indication of the turmoil that was sweeping the continent. More newspaper readers populate Spowers’s Special Edition (1936), while in her Gust of Wind (1930–31) a figure grapples with sheets of newsprint blown into the air. With its delicate lines and subtle colors, this skillful print recalls Kasushika Hokusai’s windy scene Ejiri in Suruga Province (Sunshū Ejiri) from his celebrated Thirty-six Views of Mount Fuji (Fugaku sanjūrokkei; ca.1830–32). Its inclusion highlights not just the similarities, but also the differences between Japanese woodblock prints and linocuts. Both, of course, rely on the gouging of designs before sheets are inked and impressed onto paper but, as evidenced by Spowers’s works and others, the softness of the linoleum matrix allows for a wider range of marks—one of the reasons for Flight’s promotion of the medium.

In the next room leisure is pitted against work as images of labor jostle with those of concert halls, circus rings and fairground rides. In Tschudi’s French Porters (1935) and Cleaning a Sail (1934) we see burly Frenchmen working up a sweat, while Flight’s semi-abstract Women and Washing (c. 1925) and Spowers’s Flower Girls (1934) are among several portrayals of female labor. Whether illustrating work or play, the majority of these prints display a strong sense of movement and action. Even Power’s The Exam Room (1929) manages to imbue a hall full of scholars with unlikely levels of energy and verve. A similar liveliness is seen on the opposite wall in Greengrass’s Jazz Musicians (c. 1930), whose visual rhythms effectively capture the excitement and vitality of the jazz age.

The show’s attempt to draw together a body of works inspired by the pastoral landscape is less successful. A few prints fit the bill, such as Syme’s Outskirts of Siena (1930–1) depicting a rolling Tuscan vista, and Andrews’s agricultural landscape, Fall of the Leaf (1934). But several tenuous inclusions disrupt the flow. Greengrass’s The Village (1935), for example, is more a study of architectural forms than natural ones; and Leonard Beaumont’s winsome Garden of Eden (1933) is dominated by the nude half-length figures of Adam and Eve. Biblical themes continue in three prints by Andrews inspired by the Passion of Christ: Golgotha (1931), Via Dolorosa (1935) and the much later Surrexit (1957). The wall text argument for “a connection or corollary between the burden of Christ carrying the heavy wooden cross and the labours of man working the pastoral landscape of the artist’s native Suffolk” is not entirely convincing. 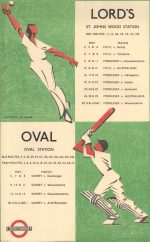 If the quietude of landscape did not excite the Grosvenor School artists, sport certainly did. The next room offers a cohesive grouping of prints, created at a time when the mass popularity of sport was largely ignored by other modern artists. This section is by far the most dynamic and features some of Power’s best-known works, including his famous picture of rowers, The Eight (1930), produced after witnessing racing crews practicing on the Thames near his Hammersmith studio. Elsewhere, Tennis (c. 1933) brilliantly captures the dynamism of the game; its twisting figures—inspired by the acrobatic contortions of French champion Jean Borotra—makes the simplified linear players of Edith Lawrence’s The Cricket Match (1929) appear static and dull by comparison. Andrews’s prints are characterized by velocity and locomotion: Racing (1934) depicts galloping horses rounding Tottenham Corner in a dynamic flow of color and speed, while Speedway (1934), an image that was originally conceived for a London Transport poster but never used, depicts a thrilling motorbike race.

Andrews shared a studio with Power, and the two collaborated on a series of posters for London Underground advertising sporting and leisure activities that could be reached via the capital’s burgeoning tube network. Working under the moniker Andrew-Power, the pair created eight posters, seven of which are included here. The elastic tennis players from Power’s linocut reappear in an advertisement for Wimbledon, while two stretching cricketers—promoting matches at The Oval and Lord’s cricket grounds—reveal the influence of Andrews. Other posters encourage spectatorship at Epsom Racecourse, the Wembley Empire Pool and London’s football stadiums.

Power was especially captivated by mass transit. Among his many prints of London Underground stations and trains is the claustrophobic The Tube Train (c. 1934), which was inspired by rush hour experiences. Aside from the top hats and vintage decor, the scene is familiar to contemporary Londoners. Despite being nearly a century old, there is a strange air of contemporaneity also around the hordes of faceless commuters riding an escalator in Whence and Whither? (c. 1930), which is accompanied by several studies and proofs showing the development of Power’s design.

The exhibition is further augmented by a selection of Power’s sketchbooks, displayed alongside materials such as Flight’s linocutting manuals and vintage lino cutters. These objects provide some useful context, although both the exhibition and the catalogue would have benefited from further information about printing methods. The book is lavishly illustrated and offers a general introduction to the printmakers of the Grosvenor School. If it does little to draw out the themes of the exhibition in any great depth, Tracey Lock’s insightful and illuminating essay on Flight’s Australian students is an important contribution, with original archival research that reveals their role in advancing modern art in Australia after returning home.

As a superb overview of Grosvenor School printmaking, “Cutting Edge” will introduce these dynamic works to a new generation. Beyond these artists’ technical proficiency, what is most striking is their boundless enthusiasm for modern life in the face of economic depression, the rise of political extremism and a looming world war. As Samuel has previously written, their prints “exist as a reminder of a time when there was a genuine excitement for the possibilities of the modern age and optimism for the future.”1 In our own pessimistic and uncertain times, the Grosvenor School has much to show us.