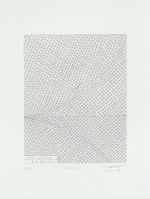 Although most of the works on view in Chris Ofili’s recent exhibition at David Zwirner’s Upper East Side gallery were bright and glittering allusions to the Homeric sea nymph Calypso, one wall featured instead a grid of tenebrous, expressive etchings portraying Shakespeare’s tragic hero Othello.1 The show’s title, “Dangerous Liaisons,” was a reference to René Magritte’s eponymous 1935 painting of an optically impossible, self-reflecting nude woman. The overlapping themes of desire, seduction and deception clearly link the stories of Calypso, who distracted Odysseus from his homeward journey for seven years, and Othello, tricked by a jealous underling into murdering his innocent beloved. Ofili’s Othello prints, however, share their origins with another body of work—the artist’s etching portfolio Lochs, also recently published by Two Palms.

Both series arose during a trip Ofili made through Scotland in the summer of 2018. Carrying 20 prepared copper etching plates, he drove from loch to loch, stopping at each body of water to draw on the plates en plein air, and creating a kind of abstracted visual travel diary. (The plates were later sent back to Two Palms for processing.) While on the road, he listened to an audiobook of Othello, an experience that led to the second group of etchings. The two series are like day and night: one light and radiant, with crisp black lines on bright white paper; the other somber and brooding, the lines printed in white ink on paper coated with black mica. 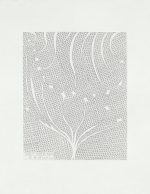 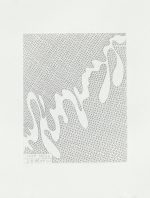 Ofili, who won the Turner Prize in 1998 just before his thirtieth birthday, became famous for his evocative use of materials—such as resin, glitter and (infamously) elephant dung—and for his ethereal, kaleidoscopic compositions that teeter between abstraction and figuration. Born to Nigerian parents in Manchester, he has lived and worked primarily in Trinidad since 2005. The island’s atmosphere is reflected in the bright, airy contentment of his figurative scenes and landscapes, as well as in the elusive deep blues and blacks of his Blue Rider paintings and Black Shunga etchings [see Art in Print Sep-Oct 2018]. “Night and twilight here [in the Caribbean] enhances the imagination,” he has said. “It’s a different level of consciousness that is less familiar to me, and stimulating through a degree of fear and mystery.”2

A similar dichotomy between light and dark, visibility and inscrutability, plays out in the lochs and Othello prints—one capturing the summer light of the Highlands and the other ruminating on a fallen hero. In Ofili’s rendering, each loch appears as a field of tessellated triangles, disrupted by curves, loops and meandering organic forms. The mix of interlocking linear geometry and biomorphism recalls Ruth Asawa’s wire sculptures, along with Ofili’s black-and-white photographs of chain-link fences in Trinidad. The photos juxtapose the innocuous regularity of the wire structure and the natural beauty of the environment seen through and around it. In a similar manner, the linked triangles of the etchings derive a regular order from an irregular topography. 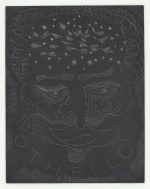 The location and the date of each drawing is marked in the lower left corner. In Loch Ness, drawn on 2 August, an organic white flourish cuts diagonally across a lattice. In Loch Lomond, from 9 August, two narrow rivulets curve in from the right and meet where a horizon line bisects the image. Ofili’s Lochs emulate the subtle fluctuations of light, wind and flora on the surface of water. Somewhat comically, they are oriented as portraits rather than landscapes.

The Othello prints also employ delicate lines and a mix of geometric and organic forms, though to very different ends. In each print a loose linear sketch of Othello’s face fills the page, its expression changing from print to print as the narrative unfolds. The drawings are quick and gestural; wispy calligraphic flourishes subtly convey the tilt of an eye or the furrowing of a brow. The doodley quality of Ofili’s line supplies endless visual variety, while cascading teardrops offer a unifying motif. On the blank slate of Othello’s forehead, Ofili provides quick figurative summaries of scenes from the play: the general’s elopement with the beautiful Desdemona, his deployment to Cyprus, his betrayal by Iago, the resulting murder of Desdemona, and finally Othello’s suicide. These elements, printed in white ink, pop against the black-mica-coated paper—a treatment inspired by the opalescent metallic surface of Black Shunga—grounding each drawing in a dark, obfuscating shimmer. 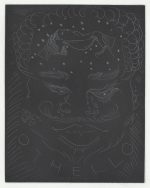 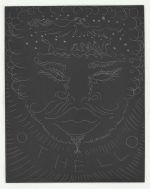 Ofili gives Othello the curly hair, round lips, broad nose, furrowed brow, and upturned eyes that evoke European notions of African features—a visual stereotype that Ofili often satirizes in his work. It is a rendering that calls attention to Othello’s rarity as black hero in classical literature. Shakespeare’s character probably has roots in a number of historical figures, but their lived complexity—and often the scripted complexity of the role—has regularly been interpreted in ways that are crudely reductive or misleading (until recently he was frequently portrayed by white actors in blackface). Ofili’s Othello is a powerful figure, equally capable of devoted love and of jealous rage. These tender images show the tragedy and beauty of this duality, projected on the face of black masculinity.

Both print series—the brightly lit Lochs, beaming with energy, and the brooding, glittering Othellos—offer entrancing surfaces along with the knowledge of something larger and less readily understandable below. Such complexity is also seen and felt in Ofili’s Caribbean works and his fascination with the mysterious forms that manifest in the liminal space between day and night, night and day. These enigmas may be difficult to perceive in the artist’s work—as Ofili has said, it is a process that requires slow looking.