“The Enchanted World of German Romantic Prints” was a landmark exhibition for an American museum. Not only did it feature 19th-century German art, a rarity in and of itself, but it concentrated on prints to the exclusion of other media. Although several American museums boast significant collections of German Romantic art, this material is rarely displayed as the focus of a large-scale curatorial effort. Rather, it is dutifully and carefully collected, even as prices rise exponentially, but largely kept in vaults.1 Besides America’s tendency toward Francophilia, why this reticence? 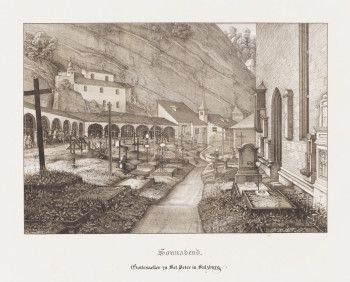 The exposure of American audiences to 19th-century German art, regardless of media, raises knotty issues of politics, style and genre. Whereas German Romantic music is embraced by orchestras and in civic opera houses and concert halls, and the literature and philosophy of Friedrich von Schlegel, Novalis and Johann Wolfgang von Goethe are well represented in academic curricula, the visual arts have been roundly ignored. (The one important exception is Caspar David Friedrich, who has been embraced in American monographs, exhibitions and university survey courses.)

This lacuna can be explained in part by long-standing political biases against Germany (two world wars) and by the favor bestowed by the Nazis on certain strains of 19th-century German art. In addition to Friedrich, artists whose paintings Hitler and Göring bought or stole for the Führer-museum included Arnold Böcklin, Johann Wilhelm Schirmer and Hans Thoma. By contrast, the Nazis’ denigration of “Degenerate Art” had the opposite effect on American collecting—the U.S. is home to rich pockets of German Expressionist art, especially prints. Indeed, acquiring Expressionism—sold to American collectors and museums by German émigré dealers such as J. B. Neumann—was, in some ways, an enlightened form of political activism; the art was readily embraced for its associations with progressive politics, while also appreciated for its bold aesthetics. German Romanticism, on the other hand, which was coldly realist in style but filled with literary, musical, religious and philosophical allusions, was and remains an acquired taste in this country.

Many of the exhibitions that have featured 19th-century German art over the past 25 years, and especially since the fall of the Berlin Wall, have taken the form of surveys. Using the French-oriented temporal and stylistic designations, the shows have moved from late Neo-Classicism through Romanticism, Realism, and Impressionism.2 While these efforts have provided viewers and readers with a broad sense of German artistic production, they have also vastly oversimplified a complex century and political geography, presenting a linear, teleological handling of big names, jumping from Friedrich to Adolph Menzel to Max Liebermann in seamless continuity. In addition, each of these exhibitions has been drawn from the holdings of a single German museum or private collection, belying the idiosyncrasies of those particular collections. 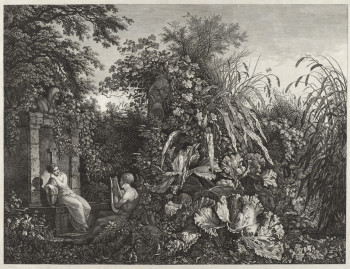 While 19th-century German drawings have been considered in American exhibitions—again, culled from German private collections or German state museums—19th-century printmaking has been the purview of very few museums.3 The Milwaukee Art Museum, established in what had been a large German community supported by local breweries, is one of the outliers.4 Museums like the Metropolitan Museum of Art and the Art Institute of Chicago incorporate Romantic prints into their permanent collection rotations, but their holdings have not been the subject of stand-alone exhibitions. One interesting exception in the realm of printed imagery has been a preponderance of shows focused on the German Symbolist Max Klinger. His imaginative, detailed and over-the-top brand of Symbolism greatly influenced the Surrealists, and his print portfolios had a major impact on the Expressionist generation. While Klinger’s vision came directly out of Romantic aesthetics, his imagery has been especially intriguing to Americans.5

It was therefore a momentous occasion when the Philadelphia Museum of Art (PMA), under the expert curatorial eye of John Ittmann, mounted “The Enchanted World of German Romantic Prints.” Over the past two decades, Ittmann has been a champion of this material, starting with his 1992 exhibition of 147 prints, “Art and Nature: German Romantic Printmaking, 1750–1850.” (This earlier exhibition covered a slightly broader chronological range, including some Rococo imagery; between the two projects, only 34 prints were displayed twice.) The PMA owns the largest collection of this material in the United States, with some 8,500 examples. Its foundational holdings come from the grouping of old master and modern prints amassed by John S. Phillips, a robust body of material that has grown with considered acquisitions under Ittmann’s stewardship. 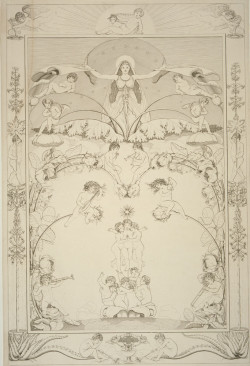 Composed of 125 etchings, lithographs and woodcuts, “The Enchanted World” presented prints by artists from Germany, Austria and Switzerland made between 1770 and 1850. Winnowing the PMA’s vast holdings to 125 works could not have been easy. The broad cultural changes that swept through German-speaking Europe during this era and the region’s bewildering number of disconnected political centers prior to German unification in 1871 make the task of providing a cohesive narrative tremendously challenging. In the exhibition’s introductory text Ittmann worked to present this relatively unknown material to the public in an approachable way:

The prints reveal a number of new artistic trends, such as the emerging taste for wild, untamed landscapes and the rise in popularity of friendship portraits and intimate family scenes. The Romantic era was a time when writers and poets rediscovered ancient Nordic sagas and age-old fairy tales, and when artists began to look at Dürer and Raphael… as saintly figures worthy of pious emulation.

While the introduction named four central themes for the show, concentrating on the fanciful and emulative, the display had 17 discrete sections. Perhaps the goal was to present the visitor with a surfeit of themes to echo the diversity of the artists, but this profusion of subdivisions undermined cohesiveness, making it difficult to gain a unified perspective. Despite the superior selection of objects and the well-written wall panels, the “more is more” presentation was somewhat overwhelming. The exhibition catalogue—which once published will be a major scholarly contribution to the field—was not yet available to help the visitor navigate the plethora and diversity of material.6

Despite this organizational shortcoming, “The Enchanted World” was a stirring exhibition, filled with spectacular impressions and fascinating images for the general public and scholarly community alike. The show included some of the rarest and most majestic works of the period: Caspar David Friedrich’s woodcut Woman Seated under a Spider’s Web (c. 1803–4), Ferdinand Olivier’s powerful lithographic series Seven Places in Salzburg and Berchtesgaden (1823) (Fig. 1), Wilhelm Kolbe’s Youth Playing a Lyre to a Maiden by a Fountain (ca. 1802-3) (Fig. 2), and Philip Otto Runge’s allegorical series The Times of Day (1805) (Fig. 3). In between these famous works, Ittmann incorporated lesser-known prints and printmakers to round out our knowledge of the period. Flanking the Runge were prints on the same theme by Johann Heinrich Lips (1793–1805) and Eugen Eduard Schäffer (1829–38), the former a rare set of hand-colored aquatints and the latter a reproductive etching and engraving after a fresco by Peter von Cornelius. Among other engaging works was Eugen Napoleon Neureuther’s large etching Little Briar Rose (Sleeping Beauty) of 1836, teeming with details and arabesques, and accompanied by an interactive screen that unraveled its iconography. 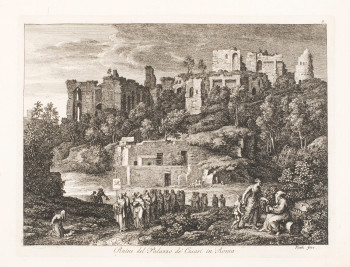 The lure of Italy was especially powerful for artists in German-speaking Europe, and this was in strong evidence throughout the exhibition. Artists such as Albert Dies, Wilhelm Friedrich Gmelin, Joseph Anton Koch (Fig. 4) and Johann Christian Reinhart captured both the real and imagined enticements of Rome—not the ancient city but the lush landscapes and majestic waterfalls of its surroundings. Hand-in-hand with Rome’s allure was a fascination with the supposedly pure art of figures such as Albrecht Dürer and Raphael. This tendency was particularly pronounced among the Nazarenes (or Brotherhood of Saint Luke), who built a collective community in the Eternal City to revive religious art in the manner of their Renaissance predecessors.7

Another highly rewarding aspect of “The Enchanted World” was the inclusion of several beautifully designed and intelligently conceived cases devoted to paper culture, which flourished during the Romantic period in diverse manifestations. It produced not only the fanciful etchings of Neureuther and Olivier’s complex lithographs but also small calling cards, inexpensive art union or etching club prints, song illustrations and, of course, illustrated books. Particularly enticing for today’s audience are representations of the Grimm Brothers’ fairy tales; their youngest sibling, Ludwig Emil Grimm, etched many designs for their haunting stories. One could spend hours poring over these small-scale pieces as they, in some ways more than the larger masterworks, speak volumes about the bourgeois culture that fed the appetite for prints in this era.

One can only hope that other American museums will follow the PMA’s lead in mounting comparably thought-provoking and ambitious shows. Dismantling preconceptions—political or aesthetic—and revealing interdisciplinary resources of another era should be the mission of all museums. Doing so while inviting the uninitiated into an enchanting world of myth makes the task that much more rewarding and surprising.