Guido Lengwiler’s A History of Screen Printing is a remarkable achievement that chronicles the history of the medium from its inception early in the 20th century through the World War II era. The lavishly illustrated text, with a foreword by Richard S. Field, is divided into seven sections and includes extensive footnotes, an appendix with a list of patents and an index. A ribbon bookmark accentuates this elegant production.

The approach is largely chronological, with sections dedicated to stenciling techniques in the 19th and 20th centuries, the origins of the screenprinting process in the United States, technical developments, the spread of the medium from the United States to Europe, screenprinting during the World War II era and finally special applications.

Throughout there are insets with short biographies dedicated to the many key players and innovators in the complex evolution of screenprint during the first half of the 20th century. Drawing on archival sources, trade manuals, printing industry journals and interviews (and judging from the logos at the end of the book, supported by 17 printing businesses and organizations), Lengwiler has compiled an exhaustive, attractive and enjoyable history.1

The author, a Swiss, is himself a screenprinter and teaches the process at the Schools for Arts and Crafts in Berne.2 It should be stressed that this is a history seen largely through the lens of printing industries in which “fine art printing” (often distinguished by the term “serigraphy”) is seen as a special case. 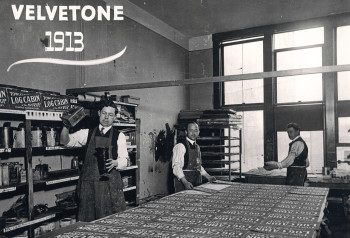 Lengwiler acknowledges the importance of earlier stenciling techniques such as those used to produce Japanese textiles, for the coloring of popular prints like imagerie d’Épinal, or mimeograph machines and other stencil duplication systems. He traces screenprint’s immediate precursor, however, to the industry of felt pennant production. He chronicles how pennant production techniques were adapted in California for printing signs and posters, pointing to the San Francisco printing firm of Frank Otoker Brant and Joseph Anastasio Garner as an early example of graphic screenprinting: their first screen process job was a 1912 order for 40,000 Del Monte brand advertisements on card stock.

Lengwiler dedicates a good deal of space to the Selectasine process, which offered a way to produce a multicolor composition using only one screen and heavy, opaque pigments. It is remarkable how the process, which originated with the Selectasine Company in San Francisco in 1915 and was patented in 1918, pervades the history of screenprinting in the first half of the 20th century. Conceptually the process is not unlike reduction block printing, and it proved to be highly efficient. Lengwiler reproduces many pages and “Service Features” from the 1923 Selectasine Hand Book on such topics as “improved method for making open letter stencils,” “’Ben Day’ effects,” “blotter tonal shading” and “’Puddling’ for oil painting effects.” The Selectasine process held sway until the late 1930s when multiscreen processes with thinner color layers became the method of choice, in part because it lent itself to the use of hand-cut stencil films.

Screenprinting found myriad applications on surfaces as diverse as automobile tire covers and first-aid kits. Lengwiler mentions cardboard signs used to solicit donations for cigarettes for the troops in World War I and the printing of army footlockers during the Pancho Villa Expedition in 1916. In World War II, screenprinted decals were used on aircraft (a staggering 2,000 decals for each B-29); and for the earliest printed electronic circuit boards, invented by the Austrian engineer Paul Eisler, who had emigrated to England in the wake of the Anschluss. As Lengwiler explains, due to the sluggishness of the British patent office the actual production of Eisler’s printed circuitry took off first in the United States, where it was used for fuses in anti-aircraft shells.

Lengwiler’s treatment of technical advances in screenprinting is fascinating. In addition to the development of knife-cut and photosensitive stencils we learn a good deal about developments in the chemistry of inks, from home-grown recipes that could include “grease, syrup, honey, water or petroleum jelly,” to luminous and transparent inks, to Day-Glo colors. The author also addresses advances in the kind of sturdy material, or bolting cloth, used for screens, most importantly the introduction of synthetic fibers. 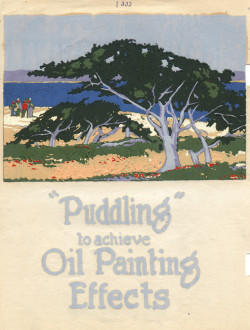 Above: Service feature with printed sample in Selectasine handbook, 1926. Serico-Eich archives. Right: The Canyon Gateway, Arizona (1923), reproduction by the Tonge Art Company from a painting by Fred Grayson Sayre, printed in watercolors, about 30 shades, 13 × 17 1/2 inches. 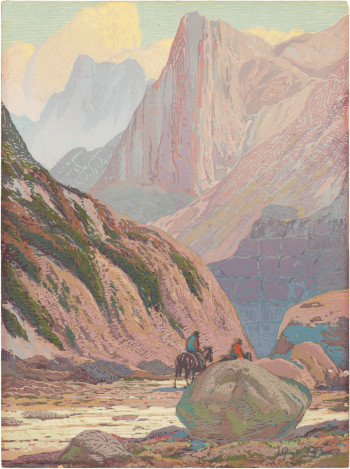 The use of screenprinting to reproduce paintings is taken up on several occasions, including an interesting section on the Gilbert Tonge Art Company, founded in Los Angeles in 1922 to make “Sayrographs”—reproductions of paintings by the significant California impressionist painter Fred Grayson Sayre, who was also a frequent collaborator of Tonge. Lengwiler also touches on the inclusion of screenprinting in school curricula by the early 1930s and, citing J. I. Biegleisen’s Silk Screen Stencil Craft as a Hobby, its popularization as a DIY technique for amateur artists.

The readers of Art in Print will be especially interested in Lengwiler’s treatment of screenprint as an artistic medium, a topic that is most extensively addressed in the last section of the book, “special applications,” under a subsection on serigraphy. Lengwiler points out that “art prints” were produced as early as the 1920s, primarily in California (which he calls “the cradle of graphic screenprinting”), if one considers the nonadvertising works produced by commercial artists who had often trained in art schools. Artists such as Leopold Krumel and Boris Riedel had careers in the screenprinting industry in the 1920s and later made prints of their own compositions. (This commercial art/fine art crossover is reminiscent of artists like the Prairie Print Makers member Coy Avon Seward, who worked for Western Lithograph Company in Wichita, Kansas, beginning in 1923 but also turned his lithographic talents to his own creative work.) Lengwiler also considers screenprinting under the Federal Art Project during the Great Depression, reminding the reader that the head of the New York Poster Division, Richard Floethe, had studied at the Bauhaus; and that Anthony Velonis introduced screenprinting to the Poster Division and later founded the Silk Screen Unit of the FAP in New York, dedicated to screenprinting as a fine art.

Lengwiler confirms the longstanding attribution of the term “serigraphy” to Carl Zigrosser, who used it to distinguish artists’ prints from commercial work in his text for a Weyhe Gallery catalogue of screenprints in 1940.3 Lengwiler follows screenprinting enthusiasts active in the 1940s, such as Velonis, Guy Maccoy, Harry Shokler and Harry Sternberg, but he does not venture into the 1960s and the explosion of screenprint at the hands of pop artists and activists such as Sister Mary Corita. The text concludes with some discussion of printing on textiles, ceramics and glass (including the application of printed decals). 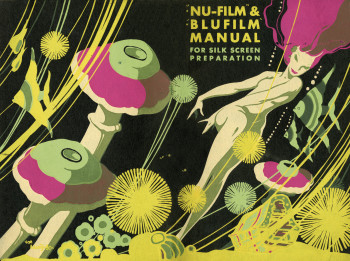 On page one Lengwiler writes, “This book recounts the forgotten history of screen printing in the first half of the 20th century. Developments since World War II are amply documented in the professional literature.” In his foreword, however, Field says, “There is more to come, and I know that Guido Lengwiler looks forward to the continuation of what he has initiated in this remarkable book.” Lengwiler’s detailed text is a wonderful contribution to our understanding of screenprinting, especially from the perspective of its industrial applications. With luck, he will escort us through the next fifty years in a future publication.