While Ireland has had a flourishing contemporary print world since the opening of the Graphic Studio in Dublin in 1960, an earlier era of popular, fine art print production has remained clouded in obscurity. “Making Their Mark: Irish Painter-Etchers 1880–1930” uncovered this neglected aspect of Irish art. Based on the research of Trinity College art historian Angela Griffith and organized in collaboration with National Gallery of Ireland curator of prints and prawings Anne Hodge, the exhibition and its accompanying catalogue gathered together prints by Irish painter-etchers from collections throughout Ireland and Britain. Its highlights include the work of relatively familiar painter-etchers such as Estella Solomons (1882–1968) and George Atkinson (1880–1941) along with lesser-known figures such as the Sligo-born Percy F. Gethin (1874–1916), who spent most of his career in London and Liverpool, and Edward Millington Synge (1860–1913), who although born in England came from an Irish family and exhibited his work in Dublin. Synge travelled widely, producing etchings of French, Italian and Spanish landscapes, many sketched en plein air. Gethin, who was also a producer of European views, had close connections with the leading members of the Irish cultural revival and made several prints based on Irish rural life. His Travelling Circus, Co. Clare (1912–13), is a vigorously executed etching depicting a swinging trapeze artist before an enthralled audience in the West of Ireland.

James MacNeill Whistler, the doyen of the 19th-century Etching Revival in Britain , was a major influence on Irish artists of the late 19th and early 20th centuries. Whistler was among those who advocated for etching as a method of producing original, spontaneous art works, in contrast to reproductive engravings or lithographs. His paintings and etchings were shown at the Dublin Sketching Club in 1884, an innovative society from which several amateur and professional painter-etchers emerged. An etching by one of the club’s founding members, William Booth Pearsall (1845–1913) of Sir John Rogerson’s Quay, Dublin (ca.1880, National Gallery of Ireland), is a restrained view of the city of Dublin from the mouth of the Liffey, inspired by Whistler’s etchings of the working waterfront of London, such as Eagle Wharf (1859, Hunterian, Glasgow), which was included in the exhibition. Booth Pearsall was also a collector, and donated etchings by his fellow club member William Fitzgerald to the National Gallery of Ireland in 1902; they were among the earliest prints to enter the museum’s collection nearly a half-century after its founding. Three of these, including Mendicant Tinker (ca.1880), a wonderfully fluid and expressively handled etching, were in the exhibition. Unfortunately for Ireland, Pearsall gave his etching by the leading Irish artist Walter Osborne (1859–1903), The Flemish Cap (ca. 1882), to the British Museum, the established home for prints in Britain and Ireland at the turn of the century. Osborne’s print and a rare etching by John Lavery (1856–1941), Two Figures in a Boat (1883), are representative of works that looked to the continent rather than to England. Osborne’s print was made in Antwerp, where he studied under the Belgian painter Charles Verlat, while Lavery, a close friend of Whistler, drew his plate in France, where he lived and worked. 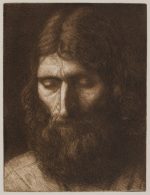 Sarah Cecilia Harrison (1863–1941) was influenced by Alphonse Legros, with whom she studied at the Slade School of Art in London (Fig. 2). The bearded figure in Harrison’s striking Study of a Man’s Head (ca. 1880), made when she was just 17, is finely executed, with delicately captured features articulated through light and shade and subtly varied hatching. Harrison was involved in the early years of Hugh Lane’s Municipal Gallery of Modern Art, a project that brought modern French art to Dublin. She may have been responsible for the dedicated printroom in its first home in Harcourt Street, Dublin, in 1908.

The presence in the exhibition of etchings by Whistler and other influential British and French artists such as Walter Sickert and Legros helped to contextualize the Irish prints and emphasize their cosmopolitan sources and ideas. Irish prints were reviewed in international journals such as The Studio (London), The Graphic (London) and Gazette des Beaux Arts (Paris). There were particularly close connections with the London art world: Irish painter-etchers studied with British printmakers William Strang (1859–1921) and Frank Short (1857–1945) at the Slade School (works by both were on view). England also offered a larger market than Ireland did, as well as greater access to workshops and equipment. The Dublin Sketching Club had access to a small printing press, as did the Dublin Metropolitan School, while artists such as Solomons acquired their own.

This points to a socio-political dimension of the Irish etching revival and its later exclusion from the canon of modern Irish art. To be an etcher in Ireland often required independent means, and these artists’ higher social class and ambivalent relationship to Irish nationalism may have been a factor in subsequent reception of their work. Several artists in the show were former British army officers, who had honed their skills while serving as military cartographers. Others were proudly Irish: Edward L. Lawrenson (1868–1940), himself a British army veteran, Francis S.Walker (1848–1916) and Myra Hughes (1877–1918) chose to exhibit their work in a separate Irish section of the International Exhibition held in Dublin in 1907, seceding from the much larger display of British art. Solomons participated in the Irish War of Independence (1919–21), joining Cumann na mBan, the women’s Irish republican organization, in 1915, the year before the 1916 Rising. During the War of Independence and the subsequent Civil War (1922–23) her studio, where she allowed republican soldiers to hide, was often raided by British and subsequently Irish Free State troops.

Her etchings of Dublin alleyways and her unusual views of landmark buildings impart an almost subversive view of the city. The elusive character of her work is perhaps enhanced by the intrigue of her clandestine involvement in the nationalist movement. Her undated etching of McDaid’s Pub evokes Rembrandt and Whistler in its subtle massed light and shade, while picturing a corner of mercantile activity in a soon-to-be demolished alley (Fig. 3). Such views reveal Dublin as a more intimate and enigmatic metropolis than the one that figures in the more conventional views of Trinity College by Hughes, a now almost totally forgotten artist who exhibited her prints to great acclaim in Dublin, London and Liverpool during her lifetime.

George Atkinson, who once headed the Dublin Metropolitan School of Art, is best known in Ireland for his etchings of the construction of the hydroelectric scheme on the river Shannon at Ardnacrusha, the largest industrial project undertaken by the Irish Free State established in 1922. Drawn on site, the etchings are as far from propaganda for the scheme as one could imagine. Shannon Scheme No 2: The Culvert (1929) is one of three large etchings from a series commissioned by the Irish government, which featured in the exhibition. The terrain—an ostensible landscape, in which workers appear as staffage—is irrevocably distrupted by the giant industrial structure (Fig. 1). Atkinson, who worked in a breadth of styles and subject matter, is also represented by a smaller etching, The Nun’s Garden (ca. 1910), in which a parade of women in dark habits contrasts with the delicate lines of the trees behind them.

In the decades after Irish independence in 1922, the transnational interests and experiences of these artists may have contributed to the marginalization of their work. Their prints were rarely acquired by the poorly funded galleries of the Irish Free State, whose preference was for paintings, drawings and watercolors. While the prints in the exhibition itself emphasized Irish subjects, the catalogue makes clear that many artists tackled continental landscapes and views, and/or were based in Britain for much of their careers. These subjects and histories, along with the prints’ idiosyncratic manner of execution, and even the predilection for urban themes may also have militated against their popularity in a period when heroic views of the rural West of Ireland were in favor. Their concerns were with the wider world and the vagaries of its natural and manmade forms, rather than with grand statements of national identity. Now, in 2019, we can perhaps finally recognize what they contributed and what we have been missing.