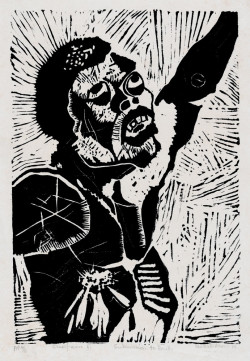 Fig. 1. Charles Nkosi, Submission to Death from Black Crucifixion (1976), one from a series of thirteen linocuts, 39 x 24.7 cm. Published by the artist, Rorke’s Drift, KwaZulu-Natal. Gift of the Associates of the Department of Prints and Illustrated Books, 2007, The Museum of Modern Art.

The politics of geography and process intersect across borders and decades in the thoughtful and thought-provoking exhibition on view at the Museum of Modern Art (MoMA) “Impressions from South Africa, 1965 to Now.” These intersections are enriched by the confluences between “Impressions” and the magisterial “German Expressionism: The Graphic Impulse,” which was concurrently on view in the expansive sixth floor galleries (see John Ganz’s review, “Sturm und Drang on 53rd Street,” Art in Print, July–August 2011). The stark visual power of Charles Nkosi’s woodcut Submission to Death (1976) (Fig. 1) with its jagged lines and its use of Christian iconography to comment on contemporary inequity, is echoed in the German Expressionism show by Max Beckmann’s Martyrdom from the lithographic series Hell of 1919 (Fig. 2). In this work Beckmann depicts the Spartacist/Communist leader Rosa Luxemburg being tortured for her political beliefs just prior to her murder, a message akin to Nkosi’s woodcut, which was part of the series Black Crucifixion, in which a black Christ suffers. Although the simultaneity of these two exhibitions was largely serendipitous, both tackle political unrest, social activism, and the pull of particular matrices. The works, however, were created in starkly different geopolitical realities: German and Austrian Expressionists were free to create what they wanted—that is until Hitler came to power—while during apartheid printmakers in South Africa, black and white, created under entirely different, racially-determined constraints. The goal of “Impressions” is to reveal how printmaking served as a medium of artistic expression and a catalyst for change during and after the years of apartheid rule. As the introductory wall text states, the show “features prints, posters, books, and wall stencils created over the last five decades that demonstrate the exceptional reach, range, and impact of printmaking during and after a period of enormous political upheaval.” Comprising nearly eighty works by thirty different artists or collectives, the exhibition is elegantly installed in the Paul J. Sachs Prints and Illustrated Books Galleries (Fig. 3). 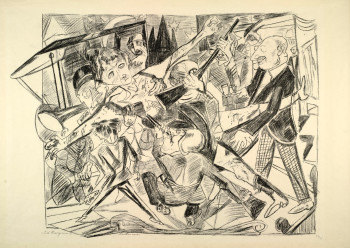 The exhibition’s prominent position at MoMA certainly confers art world recognition on the complexity and diversity of recent South African printmaking. While a strong record of textual scholarship exists on this material (such as books by Philippa Hobbs, Elizabeth Rankin, and Judy Seidman), no parallels can be seen in terms of their display in the United States. Until this year, no major survey of South African prints had been organized in America for over three decades (with the notable exception of William Kentridge’s work). The fact that curator Judith B. Hecker and MoMA took on a project of this scale, and chose to include both well-known artists and those working outside the mainstream international art world, should be applauded. Projects like “Impressions” point to MoMA’s slow and steady effort to dismantle its reputation as a bastion of high Modernism and to incorporate broader definitions of global indigenous modernisms.

The prints in the exhibition are broken out by medium, which on first view seems divisionist and overly “printy.” It is, however, the most politically relevant organizational strategy. There are five discrete sections: posters (offset lithography and screenprint), linocut, intaglio, photo-based works, and a final post-apartheid section of mixed techniques (see book review, Art in Print, May–June 2011). Although the general public may not “get” the rubric of division by process, the approach does demonstrate the interconnectedness of matrix and meaning; of form, formation, and content. Not surprisingly, given the context of contemporary South Africa, much of this content is political and an impressive number of these prints could be classified as ephemera.

In the first section, the visitor confronts a screenprinted poster disseminated by the United Democratic Front (1984) and an offset sticker created for the Save the Press Campaign (1989). Both objects were made, not by individual artists, but by collaboratives, and for purposes other than hanging on the wall of a museum (even if they do so beautifully). Although the contemporary galleries at MoMA have recently hosted works such as the Guerilla Girls’ postcards, it is a welcome and rare treat to see the UDF poster considered here as both an aesthetic object and a socio-political statement. Further on in this same room powerful linocuts—a technique considered to have special resonance in South Africa—by Azaria Mbatha (1965) and Vuyile C. Voyiya (2005) address moments of collective and personal anxiety in the face of apartheid and its aftermath. 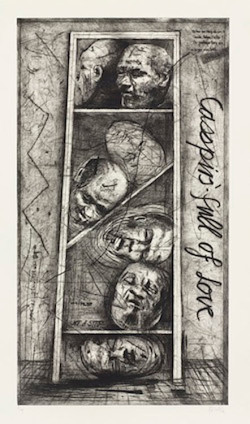 The intaglio section exposes a more subliminal connection between matrices and meanings that derives from the perception of European importation. Unlike the linocut, which in this context is connected with supposedly indigenous forms of production, intaglio techniques have historically held a more mainstream—one could say elevated—reputation. The painter-printmaker tradition has been a force since the eighteenth century. Considered the thinking person’s process, etching has long been allied with both intellect and the sketchy first thoughts of artists in somewhat the manner of handwriting. Seemingly contradicting this trope is intaglio’s history as a democratic, easily distributed medium. Artists from James Gillray to Francisco Goya to Otto Dix used etching to satirize the powerful or to decry government-inflected atrocities; in South Africa intaglio was employed by Kentridge for the disembodied heads in Casspirs Full of Love (1989) (Fig. 4) and by Diane Victor for her horrific depictions of apartheid’s enduring legacy (2001-2003). All five artists—past and present—show works of beauty and horror, alluring and repulsing at the same time. Etching’s geopolitical reception and the allusion to both erudition and activism exemplify the intersections of matrix and meaning. Intaglio processes have their own history in South Africa, both indigenous and inflected by colonialism, issues this layout brings to the fore for further consideration.

Not surprisingly, some reviewers have been critical of this project. One critic writing for the blogazine Hyperallergic complained that the organizing rubric of process and politics was “too safe,” “not daring but rather informative,” “too tidy,” going on to suggest, “the exhibition does the story justice at the expense of the art.” A writer for the magazine Art South Africa argued against the show’s essentialism, ghettoization, national rhetoric, and its subordination of art to political messages. These criticisms have their validity. It is easy to find fault with what is not here; but what is here represents a big leap for MoMA and for any American art museum. 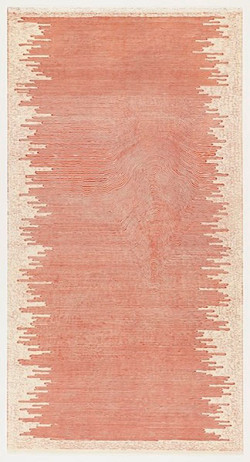 The exhibition is drawn entirely from MoMA’s permanent collection, itself a sign of economic and curatorial realities both positive and negative. Exhibitions that focus on the permanent collection are often seen as second-class citizens, but, given the current economic climate, they have become necessities due to the oppressive cost of mounting major loan shows. They do, however, have their advantages: because they are less expensive to mount, permanent collection shows, and works on paper shows in particular, tend to be more daring. They can take bolder curatorial risks than big budget shows, which often have many constituencies to please As it happens, Hecker began researching the project and traveling to South Africa for her first of many acquisition campaigns in 2004, long before this fiscally necessitated trend came into view. Once the boycott against importing goods (including art) from South Africa came to a close with the end of apartheid, MoMA began buying South African art again in many departments. Given the favorable price point for works on paper, the Department of Prints and Illustrated Books seized this new opportunity with vigor and built a collection that currently numbers around 190 works. Hecker has been able to mount a challenging show, one with an activist perspective but without encyclopedic ambitions.

The selection and presentation of this exhibition foreground the ugly realities of apartheid and the still ugly realities of living in its shadow. There are a handful of exceptions that privilege “art for art’s sake,” such as Paul Edmunds’s large, abstract linocut The Same but Different (Fig. 5) and Claudette Schreuders’s color lithographs related to extant sculptures (2003). But if the selection had been primarily aesthetic at the expense of political, the critical voices arguing against the show’s purported essentialism would have been far more vitriolic. Did this exhibition have to be predominantly political? No, but in doing so, it teaches American audiences about a defining chapter in South African history, one with chilling echoes of our own past. After all, as the artist Willie Cole said recently, “America had its own apartheid.”