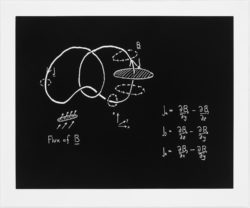 For centuries beauty has been ascribed to the mathematical description of reality, from Newton’s law of universal gravitation to Einstein’s theory of relativity.1 In a 1939 lecture the theoretical physicist Paul Dirac (1902–1982) argued that any fundamental law of physics possesses mathematical beauty, so, conversely, any beautiful mathematical theory has the potential to form the basis of new laws of physics—an assertion that might be seen as the mathematical equivalent of Keats’s “Beauty is truth, truth beauty.”2 Seventy-five years later, mathematical beauty was still a topic of inquiry: In 2014 neuroscientist Semir Zeki found that, among mathematicians, certain equations activate the same area of the brain that responds to beauty in art or music.3 But though mathematical (often geometrical) principles have been frequently employed in the creation of art, architecture and music, the presentation of formulae in art is a rarity.