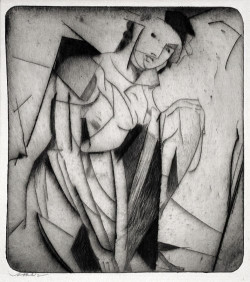 In 1913 more than 70,000 visitors—some curious, some supportive, some overtly hostile—swarmed the “International Exhibition of Modern Art” at New York’s 69th Regiment Armory in masses that one artist compared to “a subway crush in the evening rush hour.”1 Much as we are used to art that courts controversy, it is hard to imagine the deep offence taken by many visitors, artists and newspaper writers at what were essentially aesthetic differences. The artists who experimented with radical new styles were labeled “amoral,” “degenerate,” even “dangerous.” It was a turning point in the development of modern art in America, and as such it has been revisited by museums and galleries at regular intervals ever since: in 1963 the Munson-Williams-Proctor Institute and Henry Street Settlement restaged a smaller version in the original location, the city having become in the meantime the global center of contemporary art. This year’s centennial of the Armory show sparked symposia, conferences and exhibitions across the country,2 including the fascinating “1913 Armory Show Revisited: the Artists and their Prints” at the International Print Center New York.

Each retelling carries its own story about what has happened in the intervening years. Some have emphasized the idea of an America unwillingly transformed by the invasion of the European Avant-garde, others have pointed to the prominent role of American artists in organizing the show and the broad appreciation for much of the art it included. The IPCNY show took a different tack, building an exhibition around the artists who showed at the Armory, both American and European, but representing them exclusively through their prints (only some of which were on view in 1913). Freed from a specific checklist of works, the organizers were able to tell a subtler story about a moment in time and how its impact played out historically. 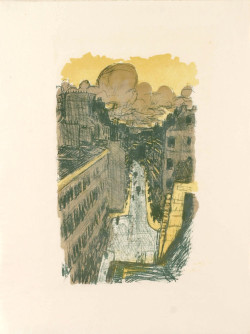 German Expressionism, for example, was given short shrift in 1913 by the show’s French-oriented organizers, but is now recognized as critical to the development of modernism, a point made forcefully at IPCNY by Ernst Ludwig Kirchner’s 1904 Gartenbild (Image of a Garden) and Wassily Kandinsky’s 1911 Allerheiligen (All Saints Day). Conversely, Americans Abraham Wolkowitz and Frank Nankivell exhibited at the Armory but are quite unfamiliar names today. Wolkowitz, associated with Alfred Stieglitz’s 291 gallery, was recognized as a modernist before 1913, and his 1927 lithograph at IPCNY (New York #2) shows that he continued to work in that vein long after, but his name has been eclipsed by others; perhaps continuing to include him in exhibitions such as this one will prompt more attention. (Nankivell’s recognition has faded so much that his 1894 etching Two Boys Walking was listed for a mere $30 on eBay.) Still others passed through the Armory on career trajectories that, in retrospect, had little to do with the aspirations of modernism: Augustus John, the most prominent British portraitist in the early 20th century, had no fewer than 27 works at the Armory; in the current show he was represented by a single etching, Head of a Granger (1906), finely rendered but unadventurous. John’s early post-Impressionist affiliations faded in his later work and his name is not often mentioned in the story of modern art.

Odilon Redon’s Symbolist paintings were greatly admired by the Armory’s American organizers, and the 73-year-old artist fared well with New York audiences, while they seemed to find incomprehensible the younger Nabis artists, who took Redon’s mystical subjectivity a step further toward formal abstraction. At IPCNY, Redon’s lithograph Il tombe dans l’abime, la tête en bas (1896) was hung not far from Edouard Vuillard’s Jardin des Tuileries (1896) and Bonnard’s Rue vue en haute (1895-1899), allowing the viewer to trace lines of influence and innovation. One can see how much further Bonnard and Vuillard were taking Redon’s steps towards flattened, impenetrable space; Redon resumed using color in his work soon after this print was made, but Bonnard and Vuillard were already there. Another Nabis highlight was Félix Vallotton’s fluid and frenzied woodblock Manifestation (1893), a reminder of the prominent role of the movement in modernist printmaking. 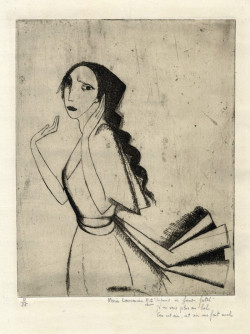 A Paul Cézanne lithograph effectively illustrated the threads later taken up by the Cubists. Cubism was one of the most divisive styles in the 1913 exhibition and was represented at IPCNY by, among other works, Georges Braque’s drypoint Job (1911), an unusual 1910 woodcut by Raoul Dufy, and Pablo Picasso’s L’Homme au Chien (rue Schoelcher) (1920). Picasso actually garnered little attention in 1913, but the work of Henri Matisse was so reviled in reviews that the writing bordered on character attacks. The nude women in the two Matisse lithographs at IPCNY regard the viewer assertively, and one of them wears a knowing smile. Though these frank, unidealized portrayals were not on view at the Armory, one can only imagine the derision that would have greeted them.

It is often forgotten that, while the most controversial art in the Armory show was European, the exhibition’s organizers were all members of the American Society of Painters and Sculptors. The most instrumental were Walt Kuhn, Arthur B. Davies and Walter Pach. Pach had worked in Paris and was a critical link to European developments and artists. At IPCNY their prints confirm that while such American artists were adventurous and curious, they remained far more attached to traditional representation than their European peers. One cannot quibble, however, with the quality of the work on its own terms, represented here by prints from Marsden Hartley, George Bellows, Edward Hopper and John Marin.

One advantage of the current exhibition’s looser approach to chronology was the ability to see the impact of the 1913 show on the Americans—a pair of 1916 drypoints by Davies, for example, show this generally conservative artist in the midst of a brief flirtation with Cubism. Also on view was a later woodcut, Seated Woman (1920), by Max Weber, the only artist here who did not show at the Armory. He was invited, but objected that he was allowed only two paintings instead of the six he thought he deserved; his presence here attests to his central role in American art thinking of the time. 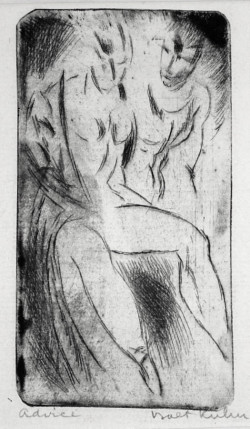 The single most contentious—and most parodied—work of the Armory show was of course Marcel Duchamp’s Nude Descending a Staircase, No. 2 (1912). (IPCNY included several cartoons from the time mocking Duchamp’s masterpiece.) The painting was ingeniously represented here through Duchamp’s Boîte en Valise, the collection of miniature replicas of his best-known works, packed into a small suitcase. The first Boîtes were produced in the 1940s, but the set on view at IPCNY was part of the 1961 re-issue and is thus doubly reproductive. There is a sense of Duchampian, punning recursiveness here—Nude Descending a Staircase was one of 57 works that the Armory show organizers reproduced on half-tone postcards to publicize the show; the postcards contributed greatly to the painting’s notoriety and undoubtedly some were defaced, not unlike the mustachioed Mona Lisa of Duchamp’s defaced L.H.O.O.Q., one of the works lovingly recreated for the Boîte en Valise. The miniatures, produced by collotype printing, hand-coloring and other meticulous techniques, are ironically at odds with the purposefully cavalier production of Duchamp’s “original” readymades.

Interestingly, hundreds of works of art from this supposedly abhorrent show were sold in 1913, including Nude Descending a Staircase. These things went home with people who paid money for them. Angry visitors there were—but also those who were captivated; the vitriol reported in the press may have reflected its eagerness to sell papers more than the actual mood of the crowd. “1913 Armory Show Revisited: the Artists and their Prints” is a reminder of another important and almost uniformly overlooked fact: while the Armory Show is most famous for its paintings and sculptures, nearly half the 250 works sold from the show were prints. Actions, as they say, speak louder than words.