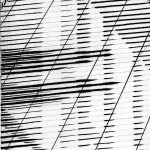 I have the good fortune of living with Andrew Raftery’s portfolio Open House, a five-part engraving executed between 2004 and 2008. A contemporary comedy of manners in the lineage of William Hogarth, the suite depicts a real-estate showing in which numerous potential buyers are inspecting a property on offer. The house—an architectural pastiche that evokes an early 20th-century middle-class home in a solidly bourgeois neighborhood—is nicely maintained and carefully appointed in an aesthetic combining modernism (the furniture) and postmodernism (many of the decorations).In four pristine, light-flooded rooms and a hallway, white, middle-class visitors with their children in tow wander about, snooping, chatting and arguing. We can glimpse one room from the next, and it is clear that the five scenes depict the same moment; the action is not sequential, but simultaneous.

As Jonathan Weinberg has pointed out, there are clues throughout Open House about the owners—their class and taste, but also their identity as a gay male couple (the two pairs of men’s shoes in two different sizes under the ottoman in the bedroom, for example).1 The prospective buyers likewise seem to embody a variety of domestic pairings. One cannot be certain who is with whom—Raftery is discreet; but that uncertainty in itself is noteworthy. In the bedroom an older and younger man appear to be squabbling, and in the kitchen there are two (presumably) same-sex couples, each with a baby: two women, who have placed their offspring on the table as they chat, and two men, one carrying an infant in a Baby Björn, who converse through a window. Raftery—whom I once heard in a lecture draw a parallel between his dedication to a marginalized practice (engraving) and his gayness—has “queered” this house. But how interesting to read the print in 2015, a decade after he embarked on it, when the actual legalities have changed—and to remark on the degree to which queerness has slipped into normalcy! Open House was prescient in this respect. The gay and lesbian house hunters in Open House in 2004, or even 2008, were maintaining their “normal” lives against existing laws and customs. These bourgeois shoppers carry on as if nothing is working against them. One might argue, however, that Open House likewise presents a scenario that fills some LGBT people with the dread of becoming like everyone else, of forgetting the heightened consciousness that Otherness offers. We melt into the larger scene like so many lines into an engraving, and forget the struggle and the thrill of being outlaws.

As Weinberg also noted, Raftery could not have known, when he embarked on this morality tale centering on a commodity that seemed within reach of so many, that when he finished printing it in 2008, the economy of the world would stand on the threshold of collapse2 —a disaster wrought in part by the type of transaction we see playing out before our eyes. Open House records a period in which the galloping financialization of our economy grotesquely inflated the value and accessibility of real estate. The pre-crash middle class is here presented in a state of relative innocence, enjoying its artificially puffed-up affluence before the bubble burst. In light of what happened, we can now view Open House not only as a morality tale, but as a kind of early 21st-century American vanitas. Suspended in time, it speaks of the fragility of wealth and worldly things. 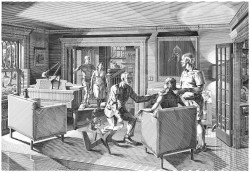 Stephen Bann has located the stylistic genealogy of Raftery’s prints in the French academic tradition, in which “each form is rendered as a volume by nothing more conceptually complex than a system of parallel, engraved lines, whose slight variations of breadth and direction indicated not only volume, but differences of texture and effect of distance from the observer’s point of view.”3 Raftery adhered to this syntax throughout Open House, composing its many virtuoso effects of light and space nearly entirely in parallel lines. Among the many attendant linear adventures in the suite there is one small incident in scene two—a square-inch stretch at the far left of the dining room (preternaturally quiet, absent of nosy visitors, haloed in light, alive in detail)—that provides the most profound “threshold” in the print, literally and figuratively.

When I began to search the prints for a fascinating inch or two for this essay, I found that the measure might encompass an adorable baby head (kitchen), an Aldo Rossi Alessi teapot (dining room), a Robert Mapplethorpe orchid (living room). More tempting, it could comprise a detail of the print hanging in the bedroom—a self-referential passage in which Raftery posts a reproduction of his previous engraving project, Suit Shopping (2000–02). Tempting as that was, I settled instead on a piece of the floor at the threshold of the living and dining rooms and at the edge of the impression where the plate mark falls off into the empty margin. Curiously, the very same representation within this detail, of shadows cast by a standing man, occurs in the adjacent living room, where the man is actually present: my detail, which serves to link the two rooms, is a doubling (of sorts) of the living room detail, minus the defining subject. The man’s absence here permits the acute viewer to focus more closely on the complex economy of my particular chosen inch.

It consists of 50 lines: 45 or so parallel marks of various thicknesses and depths crossed by five thinner, more widely spaced and evenly wrought diagonals running in the opposite direction. In this inch, we find the near miraculous encapsulation of the following elements: the surface of the floor; two shadows cast by the legs of the man standing in the adjacent living room (drawing him into the dining room and, in concert with a figure glimpsed through the window, populating this otherwise empty space); the reflection of an open, glass-paned door; and multiple sources of light—not only the light refracted through those door panes, but by implication, all the light that finds its way into that refraction: switched-on light fixtures as well as daylight streaming through windows in both rooms. Representing a single stretch of floor, it gathers up numerous phenomena within its tiny compass. 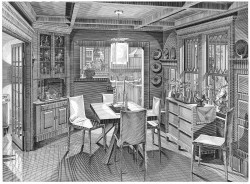 In a 1953 article titled “Philosophy of the Threshold,” Philip Wheelwright spoke of thresholds of time and of the world: time, in that all existence passes from “what just was into what is about to be,” and the world, in that man “partly stands over against his world, confronted and confronting, and partly he finds himself immersed in it, continuous with it, more or less identified with it.”4 Raftery’s lines evoke both thresholds: firstly, that of time, in facilitating a narrative, which after all involves a chronological passage, as we the viewers travel from scene to scene. Within the detail, however, time is frozen, as is the action in the scenes as a whole. Marking a transitional passage between the two rooms and referring to both at once, this little detail with its collection of lines distils the implication of time’s passage that lies at the heart of representational narrative. At the same time, it freezes time within the representation, arresting it by collapsing into itself the fleeting world of light and human motion. It stands on the threshold of different registers of time—between that of the observer and that which she observes. In the exchange, the work goes live; a distillation of the larger linear work of the print, it activates the “history” being described.

We might also say that this detail marks the threshold between imagination and the physical world, as it samples the embedded fabric of the object—the lines, the paper—at the same time it articulates the disappearance of that material existence into the representation. In most viewings, the inch disappears into the representation unnoticed. Yet in that very disregard lies its special force. We might read the detail as a metaphor for the overall suspension of disbelief that we exercise when looking at Open House, or indeed at any such representation composed of line alone. Immersed in the narrative, we choose to disregard its patent artifice. We step back and ignore the sheer abstraction of the lines, which on close view dissolve the image, destroy its totalizing illusion, an obliteration that alerts us to the work’s materiality and the fact of its production—and offers a trace of the artist.This is, after all, line’s sleight of hand, its unique persuasiveness in relation to seeing—a relationship that marks the threshold of art and perception. In this, the most poetic of Open House’s many thresholds, the square inch in the doorway trumps them all.