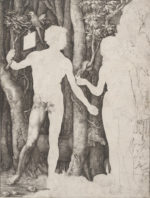 It’s axiomatic that there is a close relationship between what an artist chooses to hold in their hand, what they materially create, and what they hold to be the purpose of art. Engraving is a resistant and difficult medium capable of a precision and detail unequaled by any other manual art. The medium was defined by those qualities for centuries, with Albrecht Dürer setting the ne plus ultra standard. The technique of etching arose in the middle years of his career, bringing with it a new autographic immediacy that engraving could not offer. Dürer seems to have been eager to explore its possibilities—the first clearly dated etching, made in 1515, is by him—but three years later, after making only six known etchings (all but one completed between 1515 and 1516), he abandoned the technique.

Dürer’s brief foray into the new medium, and his subsequent return to the rigors of engraving, can be seen as both a response to the formal and material characteristics of what was then a fresh, experimental technique, and also to the philosophical implications of experimentalism itself. 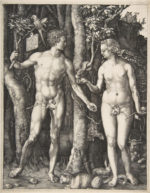 Engraving had ancient antecedents in stone, bone and metal, though printing from engraved metal plates arrived in Europe only a generation or so before Dürer’s birth. Dürer learned the technique when apprenticed at age 13 to his father, a goldsmith, and refined his skills under the printmaker Michael Wolgemut. Ambitious, observant, inventive and possessed of uncommon draftsmanship abilities, by his mid-20s Dürer had done more to establish printmaking as an independent and commercially viable fine art than any predecessor or contemporary.

Engraving uniquely incorporates physical strength, tactile sensitivity and bodily engagement in marking a matrix—every mark or line is intimately characterized by movement, depth, and pressure—a sublimation of force. The combination of strength, exactitude and large-muscle control is quite unlike the kinesthetic action of writing or drawing. The burin is held fairly firmly (but not clenched) in the palm of the hand, not upright as a pencil, and is aimed steadily in one direction. The engraver’s hand and arm are held in alignment close to the upper body. The plate is turned on a cushion against the burin as the point is driven into the metal at a slight angle to the surface of the plate. It is the angle of approach to the plate that creates the depth and quality of a line; the finest lines are achieved by engaging the metal nearly parallel to the plate, and a steeper angle plunges the burin deeper into the metal for a darker mark, though too high and the burin will bury itself into the copper and come to an abrupt stop. With each stroke, a curved sliver of metal is displaced. Each engraved line marks continuous contact with the metal, a gesture with a characteristic swelling trajectory from the entrance to the exit of the burin.