Most of the economic legacies of World War I for Germany were catastrophic, but one at least marks an intriguing intersection of print and social history—the brief flourishing of emergency currency, or Notgeld—paper vouchers that were issued locally in lieu of national currency. Printed in small denominations—generally one mark or less—they were intended to replace coinage in commercial transactions, and had developed as an emergency response to the critical shortages of metals and the widespread hoarding of silver and gold. Notgeld was printed by regional governments, cultural and civic groups and other organizations across the nation. These early notes were usually just functional in design: typographic statements in black ink, with a serial number and perhaps an officiating rubber stamp or seal. 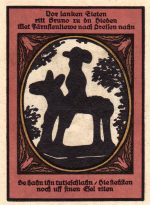 By the end of the war in 1918, however, collectors and collectors’ clubs had arisen, and with them a demand for more Notgeld, new Notgeld. In response to this market and also to the continuing shortage of coins, a new type of bill evolved,  printed in thematic series—Notgeld Serienscheine. In an ad hoc, decentralized flurry, hundreds of municipalities, regions, states, organizations, festivals and other organizations began to commission, print and sell their own local versions of paper certificate notes. These were nominally for the benefit of local residents but were also meant to appeal to the expanding market of Notgeld collectors and dealers. Notgeld specialist Courtney L. Coffing estimated that “the total number of individual bills of paper notgeld printed is 163,000, with Serienscheine notes frequently grouped and sold in series of six or more.”1

Unlike the wartime vouchers, these were designed in sequential denominations of pfennigs, all united through a pictorial and/or narrative theme articulated on the bill’s face (the reverse sides conformed more closely to the format of traditional paper currencies, displaying the note’s value, limitations and local information and details). Regional history and culture were popular subjects—local songs and folktales are frequently illustrated, as are events that predate the unification of Germany in 1871. There are citations of victorious battles, regional legends and miracles, industrial or agricultural strengths, morality tales—an endless uplifting torrent of narrative in pictorial serialization. But satire appears too, along with political commentary, moralizing, and cultural critique representing hundreds of distinct points of view. The stylistic spectrum ranges from traditional illustrative naturalism to full-blown modernism. A series from Frankenhausen records a critical battle in the 16th-century Peasants War (fig. 1); another, from the Silesian town of Grunberg (now Zielona Góra in Poland) celebrates the 13th-century immigration of weavers and vintners from Western Europe (fig. 2). A 50-pfennig note from the town of Itzehoe, one of a series designed by Wenzel Hablik (1881–1934), takes a more abstract approach with a graphically simplified map (fig. 3); and a one-mark note from Neheim abjures history, showing instead a brightly lit factory framed by a verse about the resilient German spirit in its pursuit of light (fig. 4). It is easy to see such Notgeld as a form of cultural discourse, preoccupied with the past and anxious about the future. One might even characterize the form as a kind of predigital social media for debating and reconstructing a new national cultural identity.

In truth, however, most Notgeld Serienscheine are visually unremarkable, burdened with boring subjects, indifferent design and, all too often, compositions dependent on the format of bureaucratic documents. Among the many categories of dullness are postcard scenics, portraits of hometown notables, and full-throttle backyard boosterism.

My first encounter with Notgeld was accidental. Collector’s curiosity, sparked by a long interest in European history and coins, led to a casual Google search for Weimar-era inflationary currency, which resulted in a screen filled with thumbnail images of drab coupon certificates. Then, suddenly, there was a stark black-and-white silhouette of a crowd that stopped me cold. It was graphic in every sense of the word, so clear and yet so mysterious. Children walking in darkness. A pantomime in black and white, no details. And it filled the world.

All this power was contained in a 50-pfennig note, less than four inches on its longest side, designed by the photographer and filmmaker Walter Hege for the town Naumberg in 1920 (fig. 6). Serienscheine are small, ranging from the size of a postage stamp up to a few inches on a side. Rarely does one reach the size of a postcard. The paper quality is uniformly good, heavy and not faded by age. The commercial lithography or letterpress printing is simple but robust, and coupled with the fact that almost all notes were collected and not circulated, the average condition is excellent.2 Although they were printed and distributed almost exactly 100 years ago, most individual bills feel vivid, crisp and oddly fresh. The small scale and lack of apparent aging mean that holding Notgeld is an experience of direct, tactile connection as well as visual engagement. Nothing is under glass or at arm’s length—you and the viewed object are in direct contact. Eye, hand and print fuse together for a moment of pure focus.

The most compelling Serienscheine make use of effective printmaking strategies such as limited colors and flat shapes. Black silhouettes with intricate edges  are capable of conveying complex characteristics in compositions such as Detmold’s 50-pfennig note picturing the foundational German hero Hermann, who defeated the Romans in the Battle of the Teutoburg Forest in 9 CE (fig. 5). As in a shadow play, Hermann appears as a black shape framed by tree trunks, with his club, his antlered helmet, and cloak blowing moodily in the breeze. The lack of surface detail—texture, color, shading—delivers the image with an abstract intensity.

In addition to such black-figure, white-ground silhouettes, there are variations in which solid black and white shapes alternate as positive figure elements in the same image. Hege’s 50-pfennig note commemorates a 15th-century siege resolved by a Naumburg school teacher who enlisted his pupils to make an appeal to the besieging army; the striding legs and gaunt head of the teacher intercut the sky at top and the white praying forms of the children at bottom. This spatial intercutting implies a parallel, dynamic uncertainty about what is an object and what is not; there is a perpetual back and forth of roles that never stabilizes. (Hege also designed a very popular series for the town of Freyburg.)

Adding a second ink could deepen an image and exploit the subjective power of color—the orange-lit windows of the Neheim factory suggest a bravely humming enterprise, while the orange backdrop behind the charging horses of the Frankenhausen battle scene suggests a sky lit with fire. Crimson rays of sunlight set behind a silhouetted ship and ecstatic, twirling waves in a bill from Kreis-Norderdithmarschen on the North Sea (fig. 7). Replacing the white void of blank paper with something more dramatic, these stratagems can establish hierarchies through overlaps, or create just enough variation to nudge an image toward a less graphic, more atmospheric sensibility. The morose brown field behind the searching dog in a note from the town of Vechta is one example (fig. 8); or the ghostly blue-gray cloud figure in Crumbach’s 25-pfennig note (fig. 9). 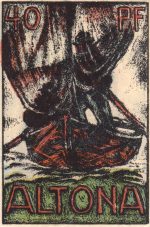 The spectrum of style, design and technical effects in Serienscheine is enormous. Mystery, poetry, absurdity, beauty and simple delight are all present, still ready to puzzle and charm. There are fine examples of straightforward representational drawing, as well as quirky images that surprise and sparkle. (In a note designed by silhouette artist Elsbeth Forck, curious stick figures argue expressively in a subterranean den (Fig. 10); while a note from Altona bypasses both whimsy and graphic clarity with a scratchy, atmospheric rendering of a small boat setting sail (fig. 11).) Modernism is present in Notgeld Serienscheine not only as a stylistic tendency in the depiction of figural subjects but also as an abstract idiom of composition that will in a short time be christened “graphic design.” In these notes, type, image and shape are flat elements, generated as purely graphic events on a surface and configured in dynamic relationships unique to each individual composition. Color is arbitrary, representation is highly stylized, and figurative elements are transformed to their minimal essentials. The design of a 25-pfennig note designed by Egon Tschirch (1889–1948) for Bad Domeran consists almost entirely of the dynamically arranged letters and ciphers spelling out the location and value; the silhouetted crozier, stag and swan (symbols of the city) are so stretched and squeezed they are almost unrecognizable (fig. 12). The one-mark note from Katowitz (modern Katowice, Poland) takes the opposite tack, layering line and pattern in a way that only slowly resolves into an image of smokestacks, machinery and flowers (fig. 13). While virtually all figurative Serienscheine notes are framed by text, ornamental panels or other devices, the modernist notes frequently lack any borders. It is a revolutionary affirmation of the unity of the entire visual surface and the object of the paper itself, side to side and top to bottom.

Though Notgeld was usable as negotiable currency, Serienscheine were usually released with very brief windows before their expiration dates, and with limited geographical validity; they quickly lost their exchange value as money. Many were printed in limited editions, running from the tens of thousands to over a million, with each bill stamped with a serial number. 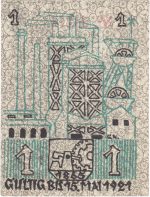 Notgeld can thus be seen as a form of commissioned artist’s print. (The same might be said of standard paper currencies, but the free-for-all of Weimar-era Notgeld production puts it in a different category.) Like artists’ prints,Notgeld relied on independent publishers who arranged the printing of graphic objects for sale, and also on the desire felt by human beings, when faced with a series, to “collect them all.” In contrast to the art market, however, the identity of Notgeld artists was not necessarily a factor in the appeal of a series. Only occasionally is the name of an artist or designer visible—notes are more likely to carry the name of the printing company as marginalia. But their combination of small scale, quick production, public distribution, and serial exploration of a thought nonetheless presented an intriguing model for artists.

It is worth noting that Lyonel Feininger’s most prolific period of woodcut production occurred in Germany between 1918 and 1920, overlapping with the height of Serienscheine production. The 237 woodcuts he made during this intense printmaking phase include numerous distinctly Germanic views—landscapes, forests and street scenes—and there is an affinity between his idealization of the German landscape and the Notgeld aim of speaking to a wide audience in a period of social and economic crises. Dynamic, radically simplified and often small in scale, Feininger’s prints suggest the eternal, while unequivocally proclaiming a new modernist idiom. The fact that he cut and printed so many so quickly indicates an urgency to produce, to make visual a living idea in its moment. (While Notgeld is most commonly translated as “emergency money,” “Not” also carries the meaning of necessity or need.) 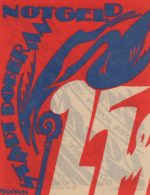 The end of Serienscheine came with the German hyperinflation that began in 1921. In 1923 Herbert Bayer, then still a student at the Bauhaus, was commissioned to design a Notgeld series for the state of Thuringia. Where Notgeld printed just two years earlier had denominations in pfennigs, Bayer’s—which were losing value even as they were printed—ran from 1,000,000 to 50,000,000 marks. Bayer’s Bauhaus Notgeld were constructed using simple, unadorned elements of typography, color, pattern, scale and orientation in a virtual manifesto for an emerging modernist graphic design.

Today, the Internet offers a global collector’s market in Notgeld, with seemingly limitless online listings. Perhaps one bill in a hundred reaches a threshold of visual energy and presence that stops a viewer’s scrolling and sparks that essential pause of interest. In that pause one becomes aware of the levels, obvious and unintended, of pictorial complexity and social meaning that lie waiting to be unwound—the deep looking and thinking that close the gap between ordinary “printed matter” and “a print,” an artwork in and of itself, by itself and for itself..