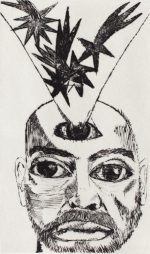 Francesco Clemente, Self Portrait with Stars (2011–18)

There is always some signal in the noise that constitutes a year of contemporary art—some subject, or quality, or method that seems to have caught the attention of artists in multiple locations at a particular moment. The New York print fairs in fall 2017, unsurprisingly, were awash in politics. (A year earlier, in the halcyon era before the last presidential election, the trending motif had been spots and dots.) In 2018, while politics remained inescapable, its primary expression seemed to move away from the team activities of denouncing evil and rallying resistance, and gravitate instead toward the personal and factual. Faces were everywhere. Specific faces, with specific stories to tell. 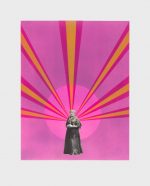 Though the plate for Francesco Clemente’s etching Self Portrait with Stars was drawn in 2011, it was published this past year, which feels fitting. Like Rembrandt, Clemente is endlessly fascinated by his own face; over the course of four decades, in paintings, drawings and prints, we have watched his beard grow white, his jawline grow squarer, his pate shinier. In this print, made with Harlan & Weaver, Clemente conveys his somber visage in quick and urgent line—his chin rests on the plate’s bottom edge, leaving space at the top for the torrent of shooting stars that pour into the third eye in his forehead. In Eastern religions the third eye is traditionally an organ of higher consciousness, and Clemente, who habitually fuses the mystical and the concrete, has used the image before, but here the emotional distance between the illuminating promise of the stars and the melancholy affect of the eyes below suggest that understanding more does not necessarily mean suffering less. 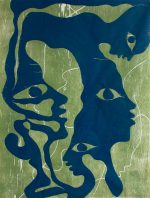 The eyes in Lonnie Holley’s recent woodcuts with Paulson Fontaine Press also occupy strange berths. Built from jigsaw-cut pieces of plywood, inked and pieced together, Holley’s prints play with the ancient Egyptian pictorial device of showing faces in profile but eyes head-on. In Born Into Colors, faces nest within faces, Janus heads look in two directions through a single eye, and negative spaces turn into faces in their own right. Everything and everyone is interconnected. It might be a picture of community, of fragmented identity, or of exploded attention. A self-taught African-American artist born into Jim Crow Alabama, Holley has always made art by repurposing things at hand, including plywood. The prints thus nod to this material history and they echo many of his sculptures, in which found objects are intertwined and perforations in the shape of eyes give us both something to look at and something to see through. 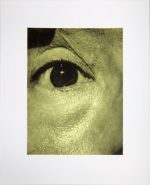 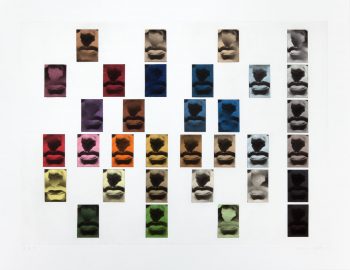 Sara Greenberger Rafferty’s new projects with Wingate Studio are cooler and more mediated, but they too are concerned with individual faces, the projection and perception of self. Using slides she bought on eBay, the artist made photogravures of partial faces and printed them over translucent jewel-toned papers. The images have something of the luminous depth of her recent photographic glassworks (some of which used the same source material). In Variations, 33 photogravures of a nose and mouth—so perfectly formed they might be carved from stone—are arrayed on a single sheet, each with a different color backing. The nine separate gravures of Eye Test show an eye and partial cheek, each again over a different hue. Though the features remain the same, the character we intuit from them shifts from anxious (lime yellow), to lurking menace (blood red), to covert (a black in which the distinction between shadow and shine all but disappear). Perhaps the eyes being tested are not the ones we’re looking at, but the ones doing the looking. 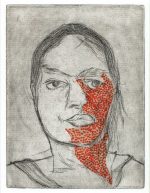 Rico Gatson also melds found photographs with brilliant color, but his subjects are instantly recognizable and purposefully bathed in glory. In a lithograph and gravure with Highpoint Center for Printmaking, the stoic figure of Harriet Tubman floats within a nimbus of hot pink, as beams of golden light blaze outward. In a digital print produced by André Ribuoli, the head and shoulders of a young Billie Holiday emit multicolored rays of light. The black-and-white figures are clipped from historical photographs, while the force fields they generate are one part religious iconography and one part psychedelic poster design. Members of Gatson’s expanding pantheon of African-American cultural icons, Harriet and Ms. Holiday posit the uncynical thought that a bit of heroine worship can be a helpful corrective.

One of the most talked about projects at the E/AB Fair, Shivangi Ladha’s Acid Attack Survivor series, depicts a different form of heroism. Produced as part of a residency with IPCNY, the project originated in in India, where the artist interviewed and photographed women who had survived acid attacks (Ladha lives and works in the city of Noida in Uttar Pradesh). She then drew the women’s portraits as etchings, using a swords-into-plowshares strategy that recast acid as an agent of creation rather than destruction. Modest, careful and moving, Ladha’s prints are studies in pain and dignity. The British Museum acquired the set of eight.

Enrique Chagoya, Everyone is an Alienígeno (2018)

In Enrique Chagoya’s latest lithograph from Shark’s Ink, Everyone Is an Alienígeno, the faces—indeed the heads—are conspicuous by their absence. Floating in blue sky at the top of the image are four items of headgear—a Chinese fengguan, Mexican sombrero, African headwrap, and Montenegrin cap. At bottom are shoulders clad in matching ethnic dress, like parts for a “people from many lands” set of paper dolls. But the space between collars and crowns is filled with four decorative bursts of ink, in four different skin tones, and eyes of various shapes and colors scattered through the mess. The phrase “exploding stereotypes” has seldom been given such direct expression. Given Chagoya’s persistently cheery palette and insouciant line, the effect is funny rather than ghastly, even as the timing and title both point to the cruelty of an immigration debate in which “aliens” are abstract types rather than actual humans.

Dominique Himmelsbach de Vries, A Paper Monument for the Paperless, installation opposite the Stedelijk Museum, Amsterdam.

Dominique Himmelsbach de Vries, A Paper Monument for the Paperless, installation in Berlin.

In Europe also, of course, refugees are most often seen collectively as a “crisis” rather than individually as persons. This is the problem addressed by A Paper Monument for the Paperless—a project organized by the Dutch artist Domenique Himmelsbach de Vries, which has placed woodcut portraits of undocumented immigrants on walls and power boxes and hoardings, from Amsterdam to Zanzibar. Often arranged in groups, the faces are young, old, male, female, smiling and tense. The style of depiction also varies from one to the next, reflecting the different hands of 18 artists who cut the blocks. Himmelsbach, who says he is “allergic to finger-wagging moralism,” is a strategist, interested in pragmatic mechanisms for bridging social divides. (In 2010 he posted signs offering one day of free help throughout Amsterdam, and for two months responded to requests for help with faulty electrical outlets and broken bicycles; an online video shows him helping a woman evacuate the mouse infestation behind her stove. The point was not to do things for people, but to do things with people whose paths might not otherwise cross. Printed in large numbers, the Paper Monument woodcuts are available on request to anyone who wishes to post them in public places: another woodcut, usually posted alongside the portraits, explains:

A Paper Monument for the Paperless

A series of sixty woodcut portraits of paperless refugees printed in large quantities and posted around cities to give a face to the undocumented people.

Get a set of posters and raise a paper monument. http://www.himmelsbach.nl

#we are here #paper monument Facebook.com/papermonument

Dominique Himmelsbach de Vries, A Paper Monument for the Paperless, installation in Berlin.

It would of course be easier to have done the whole production and distribution digitally, but the medium here is critical. Because woodcut is uncommon in the urban landscape, because we can see that these are skillfully handmade, because the faces are massed together but distinct in subject and style, the Paper Monument succeeds where most monuments fail. It commands attention. People do actually stop and look. And that’s a start.