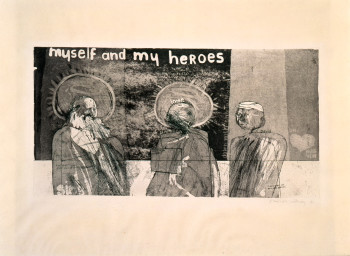 The exhibition “Hockney, Printmaker,” shown in two British locations this year, marked the 60th anniversary of the artist’s first print, the lithograph Self-Portrait (1954). This retrospective of some of David Hockney’s most personal, playful and eloquent works seems to have satisfied the critics’ desire to revisit the autobiographical and graphic elements the artist neglected in his recent Yorkshire landscapes. Those oil paintings, multicamera films and iPad drawings, vivid and voluminous, were showcased in “David Hockney RA: A Bigger Picture” at the Royal Academy of Arts and other venues in 2012–13. The curators positioned these works as ambitious sequels to the artist’s investigations in Polaroid, photocollage, fax and video.1 Yet while critics doffed their caps to his lifetime of restless reinvention and his eminence as one of Britain’s most celebrated artists, they felt something was missing. The provocative wit and swagger of his youth appeared to have been supplanted in later life by simplistic pastoral visions. Some critics hankered after the self-mythology and Los Angeles glamor of Hockney’s most famous figurative works, while others mourned the intuitive sophistication of his earlier draftsmanship.2